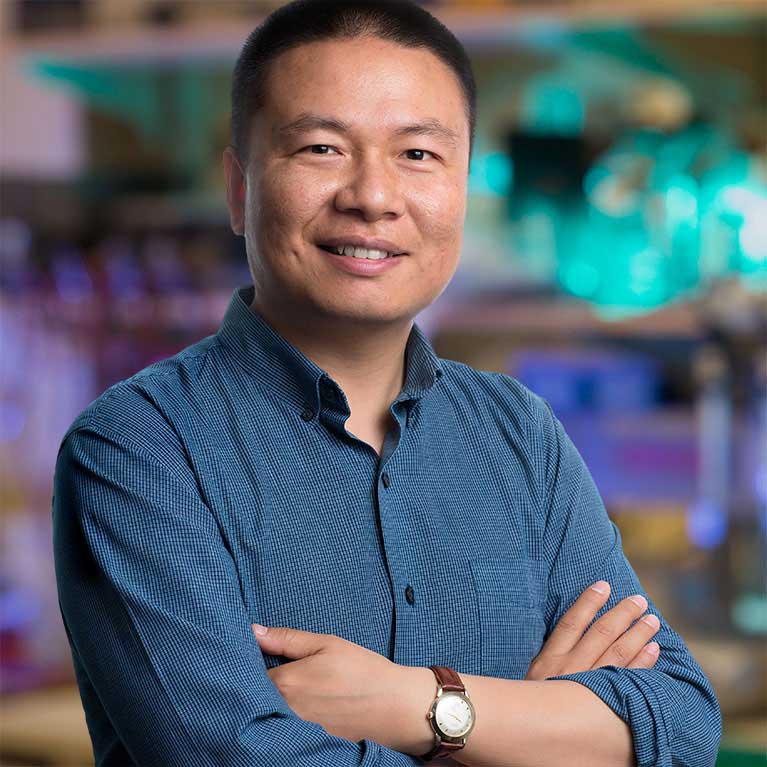 The nervous system works somewhat like a battleship’s chain of command. Imagine, for instance, that you decide to tie your shoe. The cortex, acting as captain, makes the big-picture decision to take action (“tie shoes”) and that order is conveyed to basal ganglia, the engineering department that manages the sequence of maneuvers: bending down, grabbing the laces, tying the knot. Neurodegenerative diseases such as Parkinson’s and Huntington’s damage the basal ganglia and undermine this line of communications, disrupting a person’s ability to move and function normally. To really understand what’s going on in these diseases and others, we first need to know the roles of different kinds of neurons and circuits in the brain.

Xin Jin’s team charts the fundamental principles of how the brain learns and generates actions to develop cures for a wide range of related neurological and psychiatric diseases. He uses a variety of tools to uncover the neural circuits and molecular mechanisms underlying action learning and selection. For instance, his lab created a mouse model in which neurons in the striatum (an area of the brain that talks to the basal ganglia) could be controlled with light. The scientists can then turn different neurons in the striatum on and off to see how this alters the animal’s behavior, revealing more about which cells do what in the brain.

In addition to explaining how different diseases affect the brain, Jin’s research might point the way for new therapies for these disorders. If a disease damages one portion of a motor pathway, for example, it might be possible to stimulate neurons further down the circuit, closer to the spinal cord, to initiate sequences of action.

Jin found that types of neurons damaged in Parkinson’s disease and Huntington’s disease can broadcast the signals for starting or stopping newly learned action sequences. The finding provides important insights into the problems with starting and stopping actions observed in patients with those diseases.

His research demonstrated that learning cognitive actions, such as playing chess or doing math, could involve the same neural circuitry and molecular mechanisms involved in learning motor actions. This introduces the possibility of studying how genetics influence action learning and dysfunction.

Jin’s lab is characterizing basic rules of how the brain executes actions from multiple levels of analysis and providing insights into action-related neurological and psychiatric diseases.