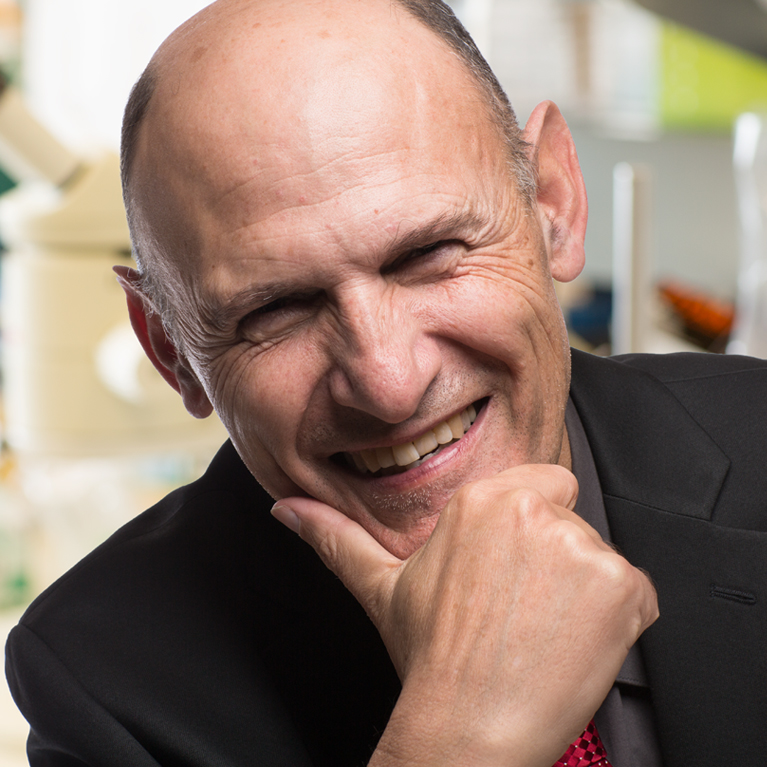 LA JOLLA—If you want to reduce levels of inflammation throughout your body, delay the onset of age-related diseases and live longer—eat less food. That’s the conclusion of a new study by scientists from the US and China that provides the most detailed report to date of the cellular effects of a calorie-restricted diet in rats. While the benefits of caloric restriction have long been known, the new results show how this restriction can protect against aging in cellular pathways, as detailed in Cell on February 27, 2020. Read more »

Putting the brakes on aging

Salk Institute researchers have developed a new gene therapy to help decelerate the aging process. The findings, which were published in the journal Nature Medicine, highlight a novel CRISPR/Cas9 genome-editing therapy that can suppress the accelerated aging observed in mice with Hutchinson-Gilford progeria syndrome, a rare genetic disorder that also afflicts humans. Read more »

LA JOLLA—Salk scientists have created a new version of the CRISPR/Cas9 genome editing technology that allows them to activate genes without creating breaks in the DNA, potentially circumventing a major hurdle to using gene editing technologies to treat human diseases. Read more »

LA JOLLA—Scientists have, for the first time, corrected a disease-causing mutation in early stage human embryos with gene editing. The technique, which uses the CRISPR-Cas9 system, corrected the mutation for a heart condition at the earliest stage of embryonic development so that the defect would not be passed on to future generations. Read more »

Salk Institute scientists have developed a novel technology to correct disease-causing aberrations in the chemical tags on DNA that affect how genes are expressed. These types of chemical modifications, collectively referred to as epigenetics or the epigenome, are increasingly being considered as important as the genomic sequence itself in development and disease. Read more »

Rapid advances in the ability to grow cells, tissues and organs of one species within an organism of a different species offer an unprecedented opportunity for tackling longstanding scientific mysteries and addressing pressing human health problems, particularly the need for transplantable organs and tissues.

In a tour de force paper published in the January 26, 2017, issue of the journal Cell, scientists at the Salk Institute report breakthroughs on multiple fronts in the race to integrate stem cells from one species into the early-stage development of another. Read More »

Scientists at the Salk Institute have found that intermittent expression of genes normally associated with an embryonic state can reverse the hallmarks of old age.

This approach, which not only prompted human skin cells in a dish to look and behave young again, also resulted in the rejuvenation of mice with a premature aging disease, countering signs of aging and increasing the animals’ lifespan by 30 percent. The early-stage work provides insight both into the cellular drivers of aging and possible therapeutic approaches for improving human health and longevity. Read More »

Salk researchers have discovered, for the first time, how to place DNA in specific locations in non-dividing cells. Read More »

Scientists in the laboratory of Juan Carlos Belmonte at The Salk Institute have discovered a new type of stem cell that could potentially generate mature, functional tissues.

Scientists at the Salk Institute have discovered a novel type of pluripotent stem cell–cells capable of developing into any type of tissue–whose identity is tied to their location in a developing embryo. This contrasts with stem cells traditionally used in scientific study, which are characterized by their time-related stage of development. Read more »

A study tying the aging process to the deterioration of tightly packaged bundles of cellular DNA could lead to methods of preventing and treating age-related diseases such as cancer, diabetes and Alzheimer’s disease, as detailed April 30, 2015, in Science.

In the study, scientists at the Salk Institute and the Chinese Academy of Science found that the genetic mutations underlying Werner syndrome, a disorder that leads to premature aging and death, resulted in the deterioration of bundles of DNA known as heterochromatin. Read more »

For thousands of women around the globe carrying a mitochondrial disease, having a healthy child can be a gamble. This set of diseases affect mitochondria, tiny powerhouses that generate energy in the body’s cells and are passed exclusively from mother to child.

Women wishing to prevent their children from inheriting mitochondrial diseases have typically relied on preimplantation genetic diagnosis to pick the healthiest embryos, but that is no guarantee of having a healthy baby. Read more »

The current pace of population aging is without parallel in human history but surprisingly little is known about the human aging process, because lifespans of eight decades or more make it difficult to study. Now, researchers at the Salk Institute for Biological Studies replicated premature aging in the lab, allowing them to study ageing-related disease in a dish.
Read more »