LA JOLLA, CA—Cold viruses generally get a bad rap—which they’ve certainly earned—but new findings by a team of scientists at the Salk Institute for Biological Studies suggest that these viruses might also be a valuable ally in the fight against cancer.

Adenovirus, a type of cold virus, has developed molecular tools—proteins—that allow it to hijack a cell’s molecular machinery, including large cellular machines involved in growth, replication and cancer suppression. The Salk scientists identified the construction of these molecular weapons and found that they bind together into long chains (polymers) to form a three-dimensional web inside cells that traps and overpowers cellular sentries involved in growth and cancer suppression. The findings, published October 11 in Cell, suggest a new avenue for developing cancer therapies by mimicking the strategies employed by the viruses.

“Cancer was once a black box,” says Clodagh O’Shea, an assistant professor in Salk’s Molecular and Cell Biology Laboratory, who led the study. “The key that opened that box was revealing the interactions between small DNA tumor virus proteins and cellular tumor suppressor complexes. But without knowing the structure of the proteins they use to attack cells, we were at a loss for how these tiny weapons win out over much larger tumor suppressors.” 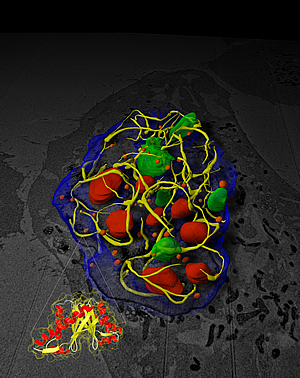 These proteins accomplish this by forming a three-dimensional web inside a cell’s nucleus (yellow) that traps these components. The findings point the way to new ways to target and destroy tumors.

Two years ago, O’Shea discovered that E4-ORF3 clears the way for adenovirus to proliferate by deactivating genes that help the cell defend itself against the virus. “It literally creates zip files of p53 target genes by compressing them until they can no longer be read,” she explains.

E4-ORF3 self-assembles inside cells into a disordered, web-like structure that captures and inactivates different tumor suppressor protein complexes. Horng Ou, a postdoctoral researcher in O’Shea’s laboratory, says E4-ORF3 is unusual. “It doesn’t resemble any known proteins that assemble polymers or that function in cellular tumor suppressor pathways,” he says. “Most cellular polymers and filaments form uniform, rigid chains. But E4-ORF3 is the virus’s Swiss army knife—it assembles into something that is highly versatile. It has the ability to build itself into all sorts of different shapes and sizes that can capture and deactivate the many defenses of a host cell.”

In collaboration with scientists from the National Center for Microscopy and Imaging Research at University of California, San Diego, led by Mark Ellisman, the center’s director, O’Shea’s team used new techniques to reveal the ultrastructure of the remarkable polymer that E4-ORF3 assembles in the nucleus—something that previously had proven difficult since the polymer is effectively invisible using conventional electron microscopy. “What you see is the E4-ORF3 polymer bending and weaving and twisting its way through the nucleus,” she says. “It does appear to have a single repeating pattern and creates a matrix that captures several different tumor suppressors and silences p53 target genes.”

Initially, E4-ORF3 forms a dimer, made up of only two subunits. In this form, E4-ORF3 largely ignores its cellular targets. The researchers theorized that when E4-ORF3 assembles into a polymer, however, it binds to tumor suppressor targets far more aggressively. To test this theory, they genetically fused E4-ORF3 polymer mutants to lamin, a cellular protein that assembles intermediate filaments that provide stability and strength to cells. They showed that the lamin-E4-ORF3 fusion protein assembled into cylinder-like superstructures in the nucleus that bind and disrupt PML, a protein complex that suppresses tumors.

The Salk findings may help scientists develop small molecules—the basis for the vast majority of current
drugs—capable of destroying tumors by binding and disrupting large and complex cellular components that allow cancer cells to grow and spread. Understanding how viruses overcome healthy cells may also help scientists engineer tumor-busting viruses, which offer a new and potentially self-perpetuating cancer therapy. Such modified viruses would destroy only cancer cells, because they could only replicate in cells in which the p53 tumor suppressor has been deactivated. When a cancer cell is destroyed it would release additional copies of the engineered viruses, which would seek out and kill remaining cancer cells that have spread throughout the body.

Engineering these viruses requires disabling the ability of the E4-ORF3 protein to inactivate p53 in healthy cells—otherwise, the virus could destroy healthy cells as well as cancer cells. At the same time, E4-ORF3 has certain important functions in allowing the virus to replicate in the first place, so it can’t be completely removed from the virus’s arsenal. Thus, the Salk researcher’s work on understanding the protein’s precise structure, functions and interactions is crucial to engineering viruses in which E4-ORF3’s abilities have been precisely modified.

The work was supported by the National Institutes of Health, American Cancer Society, Sontag Foundation, the Arnold and Mabel Beckman Foundation, and Anna Fuller Foundation.