The DNA damage response goes viral: a way in for new cancer treatments

The DNA damage response goes viral: a way in for new cancer treatments

LA JOLLA–Every organism–from a seedling to a president–must protect its DNA at all costs, but precisely how a cell distinguishes between damage to its own DNA and the foreign DNA of an invading virus has remained a mystery.

Now, scientists at the Salk Institute have discovered critical details of how a cell’s response system tells the difference between these two perpetual threats. The discovery could help in the development of new cancer-selective viral therapies and may help explain why aging and certain diseases seem to open the door to viral infections.

“Our study reveals fundamental mechanisms that distinguish DNA breaks at cellular and viral genomes to trigger different responses that protect the host,” says Clodagh O’Shea, associate professor and senior author of the work, which was published in Cell on August 27, 2015. “The findings may also explain why certain conditions like aging, cancer chemotherapy and inflammation make us more susceptible to viral infection.”

Many factors (such as radiation) can cause a break in our DNA. The team detailed how a cluster of proteins–collectively called the MRN complex–detects both DNA and viral breaks and amplifies its response through histones, packaging proteins that wrap genetic material into small bundles like Styrofoam peanuts. MRN starts a domino effect, activating histones on surrounding chromosomes, which summons a cascade of additional proteins, resulting in a cell-wide, all-hands-on-deck alarm to help mend the DNA.

If the cell can’t fix the DNA break, it will induce cell death–a self-destruct mechanism that helps to prevent mutated cells from replicating (and thus prevents tumor growth). 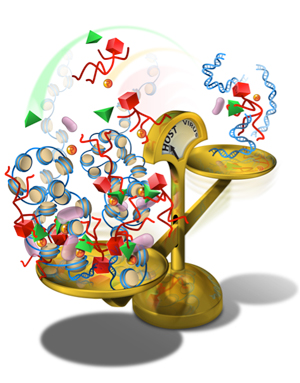 Salk researchers show how DNA repair proteins distinguish DNA breaks at cellular and viral genomes to activate an appropriately scaled response. DNA breaks and DNA viruses are ancient and persistent threats to cellular viability. A universal difference between cellular genomes is that they are far larger and have far more proteins called histones than viral genomes. This universal measure is used to distinguish DNA breaks at viral and cellular genomes to determine if a global or localized response is appropriate. This provides an elegant mechanism to neutralize viral replication without jeopardizing cellular viability.

“What’s interesting is that even a single break transmits a global signal through the cell, halting cell division and growth,” says O’Shea. “This response prevents replication so the cell doesn’t pass on a break.”

When it comes to defending against DNA viruses, however, the Salk team found something interesting: the cell’s response system begins the same way (with MRN detecting either DNA or viral breaks) but never progresses to the global alarm signal in the case of the virus.

Typically, a common DNA virus enters the cell’s nucleus and turns on genes to replicate its own DNA. The cell detects the unauthorized replication and the MRN complex grabs and selectively neutralizes viral DNA without triggering a global response that would arrest or kill the cell. The difference in the intensity of its response, says the Salk researchers, is akin to sending a text message for a local flood warning (in the case of the DNA virus) versus a citywide tsunami siren (DNA break). The MRN response to the virus stays localized and only selectively prevents viral, but not cellular, replication. If every incoming virus spurred a similarly strong response, points out O’Shea, our cells would be frequently paused, hampering our growth.

And when both threats to the genome are present, MRN will activate the massive response at the DNA break; no MRN is left to respond to the virus. This means the virus is effectively ignored while the cell responds to the more massive alarm.

“The requirement of MRN for sensing both cellular and viral genome breaks has profound consequences,” says O’Shea. “When MRN is recruited to cellular DNA breaks, it can no longer sense and respond to incoming viral genomes. Thus, the act of responding to cellular genome breaks inactivates the host’s defenses to viral replication.”

O’Shea says this may explain why people with conditions resulting in high levels of cellular DNA damage (e.g., cancer, chemotherapy, inflammation and aging) are more susceptible to viral infections.

“Having damaged DNA compromises our cells’ ability to fight viral infection, while having healthy DNA boosts our cells’ ability to catch viral DNA,” says Govind Shah, first author of the new work and a former research associate at the Salk Institute. “Our work implies that we may be able to engineer viruses that selectively kill cancer cells.” 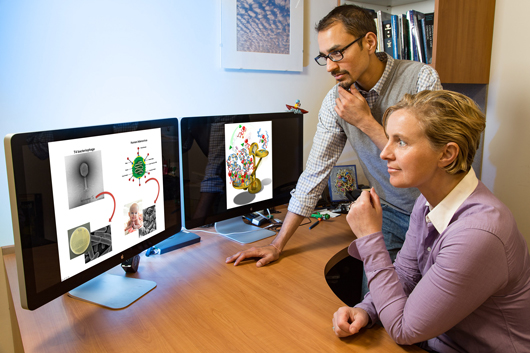 The O’Shea lab aims to use this new knowledge to create novel viruses that are destroyed in normal cells but replicate specifically in cancer cells. Unlike normal cells, cancer cells almost always have very high levels of DNA damage. In cancer cells, MRN is already so preoccupied with responding to DNA breaks in cancer cells that an engineered virus could sneak in undetected.

“Cancer cells by definition have high mutation rates and genomic instability even at the very earliest stages, so you could imagine building a virus that could destroy even the earliest lesions and be used as a prophylactic,” says O’Shea.