Use the common cold virus to target and disrupt cancer cells?

Use the common cold virus to target and disrupt cancer cells?

LA JOLLA, CA—A novel mechanism used by adenovirus to sidestep the cell’s suicide program, could go a long way to explain how tumor suppressor genes are silenced in tumor cells and pave the way for a new type of targeted cancer therapy, report researchers at the Salk Institute for Biological Studies in the Aug. 26, 2010 issue of Nature.

When a cell is under stress, the tumor suppressor p53 springs into action activating an army of foot soldiers that initiate a built-in “auto-destruct” mechanism that eliminates virus-infected or otherwise abnormal cells from the body. Just like tumor cells, adenoviruses, which cause upper-respiratory infections, need to get p53 out of the way to multiply successfully. 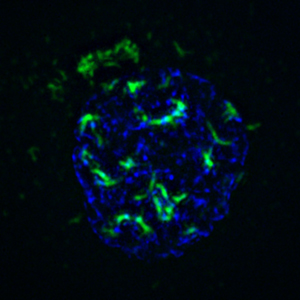 The tiny adenovirus protein known as ORF3 (shown in green) clears the way for adenovirus replication by creating “zip files” of genes that help the cell defend itself against the virus. O’Shea hopes to exploit this finding to create adenoviruses that selectively destroy cancer cells.

“Instead of inactivating p53 directly, adenovirus renders the ‘guardian of the genome’ powerless by targeting the genome itself,” explains Clodagh O’Shea, Ph.D., an assistant professor in the Molecular and Cell Biology Laboratory, who led the study. “It literally creates zip files of p53 target genes by compressing them till they can no longer be read.”

The p53 tumor suppressor pathway is inactivated in almost every human cancer, allowing cells to escape normal growth controls. Yet there is still no rationally designed targeted cancer therapy to treat patients based on the loss of p53.

“All of the targeted therapies we have are based on small molecules that inactivate oncogenes, but cancer is not solely caused by the gain of growth-promoting genes,” says O’Shea. “The loss of tumor suppressors is just as important. The big question is how do you target something that’s no longer there?”

Adenovirus seemed to provide the answer. It brings along a viral protein, E1B-55K, which binds and degrades p53 in infected cells. Without E1B-55K to inactivate p53, adenovirus should only be able to replicate in p53-deficient tumor cells. Then, each time it bursts open the host cell to release thousands of viral progenies, the next generation of viruses is ready to seek out remaining cancer cells while leaving normal cells unharmed.

“This makes adenovirus a perfect candidate for oncolytic cancer therapy,” says O’Shea. “Although these viruses did their job, to everybody’s surprise, the patients’ responses did not correlate with the p53 status of their tumors,” says O’Shea. Intrigued, she and her team followed up on this unexpected finding.

Conrado Soria, Ph.D., a research assistant and co-first author of the study, quickly realized that E1B-55K was only half of the story. “The inability of the E1B-55K-mutant virus to replicate in normal cells was not because the virus failed to degrade p53,” he explains.

In unstressed normal cells, p53 is only found at low levels due to rapid degradation. In response to DNA damage, the activation of oncogenes or infection by DNA viruses, p53 degradation is halted and as a result p53 protein levels accumulate. This increase activates p53 target genes, which arrest the cell cycle or induce apoptosis.

Just as predicted, p53 started to build up in normal cells that had been infected with adenovirus lacking E1B-55K but it was still unable to turn on its target genes and start the cell on the path to apoptosis. He eventually discovered why: Adenovirus brings along another protein, E4-ORF3, which neutralizes the p53 checkpoint through a completely different mechanism.

Instead of inactivating p53 directly, the tiny protein prevents the tumor suppressor from binding to its target genes in the genome by modifying chromatin, the dense histone/DNA complex that keeps everything neatly organized within the cells’ nucleus. “These modifications cause parts of chromosomes to condense into so-called heterochromatin, burying the regulatory regions of p53 target genes deep within,” says graduate student and co-first author Fanny E. Estermann. “With access denied, p53 is powerless to pull the trigger on apoptosis.”

O’Shea hopes to exploit these new insights to understand how high levels of wild type p53 might be inactivated in cancer as well as the mechanisms that induce aberrant silencing of tumor suppressor gene loci in cancer cells. “Our study really changes the longstanding definition of how p53 is inactivated in adenovirus-infected cells and will finally allow us to develop true p53 tumor selective oncolytic therapies.”

The work was funded in part by the Alliance of Cancer Gene Therapy, the American Cancer Society, the Sontag Foundation, the Beckman Foundation and the National Cancer Institute.

About the Salk Institute for Biological Studies

The Salk Institute for Biological Studies is one of the world’s preeminent basic research institutions, where internationally renowned faculty probe fundamental life science questions in a unique, collaborative, and creative environment. Focused both on discovery and on mentoring future generations of researchers, Salk scientists make groundbreaking contributions to our understanding of cancer, aging, Alzheimer’s, diabetes, and infectious diseases by studying neuroscience, genetics, cell and plant biology, and related disciplines.