The time it takes to reassemble the world

Home - Salk News - The time it takes to reassemble the world

The time it takes to reassemble the world

La Jolla, CA – A few glimpses are enough to perceive a seamless and richly detailed visual world. But instead of “photographic snapshots,” information about the color, shape and motion of an object is pulled apart and sent through individual nerve cells, or neurons, to the visual center in the brain. How the brain puts the scene back to together has been hotly debated ever since neurons were discovered over a century ago.

A novel experimental design allowed researchers at the Salk Institute for Biological Studies to scrutinize this process, called conjunction, stopwatch in hand. They found that individual features of an object are permanently joined together by a computational process that takes time, 1/100th of a second to be exact. Their findings are reported in the Jan. 24 issue of the Journal of Neuroscience. 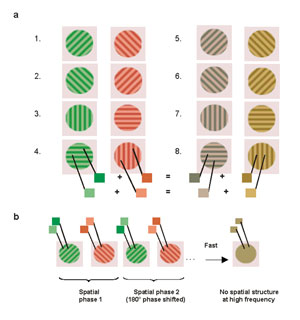 “The question of how the brain integrates different signals is fundamental to our understanding of sensory processing, and a range of different theories has been advanced,” says John Reynolds, Ph.D., an assistant professor in the Systems Neurobiology Laboratory who led the study. “Our finding that a very small, but consistent, amount of time is required to compute a very simple conjunction is important because it places very tight limits on the amount of time that is available for the mechanisms that mediate this computation to operate.”

To measure the time required for integration, Clara Bodelón, Ph.D., a mathematician in Reynolds’ laboratory, painstakingly designed pairs of simple images – for example, a red vertical stripe pattern or a green horizontal pattern – which, when presented quickly enough, cancel one another and become invisible. (See figure).

After securing the last eight computer monitors in the world that could actually present the stimuli quick enough to exceed the limits of perception (newer LCD monitors don’t refresh the screen fast enough) and painstakingly calibrating the monitors to precisely control the activity of individual photoreceptors in the eye, the Salk researchers were ready to inch closer to answering an age-old and much-debated question: How do neurons communicate to give rise to our coherent perception of the world?

At very high presentation rates, the stimuli were literally invisible. But when Bodelón slowed the presentation rate, human observers could tell an image’s orientation. Interestingly, when presentation rate was lowered even further, the test subjects could distinguish color and orientation but were unable to say which image – the vertical or horizontal one – was red or green. In other words, the brain could “see” both form and color but could not see how they were combined.

Only after slowing presentation of the stimuli further could the observers accurately report color and orientation of individual objects, indicating that computing the overall meaning of all this visual input is a time-consuming process. Thus, the features of the stimulus were available to perception before they were “bound” together. Binding of features, however, required more time.

“Nobody knew whether a separate computation step was necessary to integrate individual attributes of objects and, if so, how long it would take,” explains Bodelón. “The fact that it takes time to reliably perceive the combination of color and orientation points to the existence of a distinct integration mechanism. We can now start to test different hypotheses about the nature of this mechanism,” she adds.

“The question how the brain synthesizes visual information is of tremendous importance from a basic science standpoint,” explains Reynolds and adds that “it also has important practical implications for understanding and ultimately treating disorders of perception, such as visual agnosia, a debilitating condition in which the patient cannot ‘see’ complex visual stimuli.”

By precisely measuring this fleeting visual computation, Bodelón and her colleagues have taken an important first step in understanding the mechanisms that fail in patients who suffer from this disorder.