Language as a window into sociability

Home - Salk News - Language as a window into sociability

Language as a window into sociability

LA JOLLA, CA—People with Williams syndrome—known for their indiscriminate friendliness and ease with strangers—process spoken language differently from people with autism spectrum disorders—characterized by social withdrawal and isolation—found researchers at the Salk Institute for Biological Studies.

Their findings, to be published in a forthcoming issue of Social Cognitive and Affective Neuroscience, will help to generate more specific hypotheses regarding language perception and processing in both Williams syndrome and autism spectrum disorders, as well as the core mechanisms involved in the development of communication and social skills. 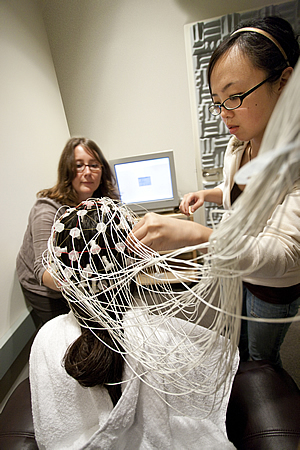 Inna Fishman and Rowena Ng place electrodes on the scalp of an individual with Williams syndrome.

“Spoken language is probably the most important form of social interaction between people and, maybe not surprisingly, we found that the way the brain processes language mirrors the contrasting social phenotypes of Williams syndrome and autism spectrum disorders,” says lead author Inna Fishman, Ph.D., a neuropsychologist in the Laboratory of Cognitive Neuroscience at the Salk, who conceived the study together with Debra Mills, Ph.D., currently a reader at Bangor University in UK.

“The discrepancy between their language ability and IQ is startling,” says co-author Ursula Bellugi, professor and director of the Laboratory of Cognitive Neuroscience at the Salk Institute, who has been studying the behavioral aspects of Williams syndrome for more than 20 years. “Children with Williams syndrome have elaborate and rich vocabularies and use very descriptive, affect-rich expressive language, which makes their speech very engaging.”

In contrast, many people with autism struggle to learn and use language effectively, especially when talking to other people. Chit-chat and gossip, the social glue that binds people together, mean nothing to them. Although there is considerable variation in linguistic ability—from the absence of functional speech to near normal language skills—deficits in semantic processing, especially interpreting language in context, are common across the whole spectrum of autistic disorders, including Asperger syndrome.

“It is this divide in language skills and use, which mirrors the opposite social profiles, that led us to explore how brains of individuals with Williams syndrome and autistic spectrum disorders process language,” says Fishman.

For their study, she and her colleagues compared brain response patterns linked to language processing in individuals with Williams syndrome, autism spectrum disorders and healthy controls. They focused on the so-called N400, a distinct pattern of electrical brain activity that can be measured by electrodes placed on the scalp. Known as ERP or event-related potential, the N400 is part of the normal brain response to words and other meaningful or potentially meaningful stimuli and peaks about 400 milliseconds after the stimulus.

When presented with a typical sentence that finished with an odd ending (“I take my coffee with sugar and shoes”), individuals with Williams syndrome exhibited an abnormally large N400 response indicating that they are particularly sensitive and attuned to semantic aspects of language. In contrast, individuals with ASD did not show this negativity, suggesting that the inability to integrate lexical information into the ongoing context may underlie their communicative and language impairments. Healthy people fell between those two extremes.

“The N400 reflects the cognitive demand incurred by the integration of a meaningful stimulus such as a word into a more general semantic context such as a sentence,” explains Fishman. The smaller N400 effect found in the ASD group suggests that they make less use of contextual information, which makes it harder for them to grasp the meaning of words.

“Our results suggest that language skills, or their brain correlates, go hand-in-hand with the level of sociability, potentially mediating the likelihood of interaction and communication with others,” she says. In fact, Fishman and her colleagues have preliminary data supporting this association between the sociability and the magnitude of one’s N400 response, among individuals with WS.

To gain a better understanding of the neural and genetic correlates of social behavior in different social phenotypes Bellugi’s team is now integrating these findings with the exquisitely mapped genetic profile of Williams syndrome. They hypothesize that specific genes in the Williams syndrome region may be involved in the dysregulation of specific neuropeptide and hormonal systems, which could explain the observed hypersocial behavior.

Researchers who also contributed to the work include A. Yam, a former research assistant at the Laboratory for Cognitive Neuroscience, and Alan Lincoln, Ph.D., professor at the Alliant International University in San Diego.

About the Salk Institute for Biological Studies
The Salk Institute for Biological Studies is one of the world’s preeminent basic research institutions, where internationally renowned faculty probe fundamental life science questions in a unique, collaborative, and creative environment. Focused both on discovery and on mentoring future generations of researchers, Salk scientists make groundbreaking contributions to our understanding of cancer, aging, Alzheimer’s, diabetes, and infectious diseases by studying neuroscience, genetics, cell and plant biology, and related disciplines.