La Jolla, CA – A collaboration between scientists at the Salk Institute for Biological Studies and The Scripps Research Institute led to the development of a new and highly effective agent that provides protection against anthrax by combining a fast-acting anthrax toxin inhibitor with a vaccine in a single compound.

The immune response generated in rats by the new agent protects against lethal toxin exposure after only one injection, and is faster and stronger than any currently available vaccine. 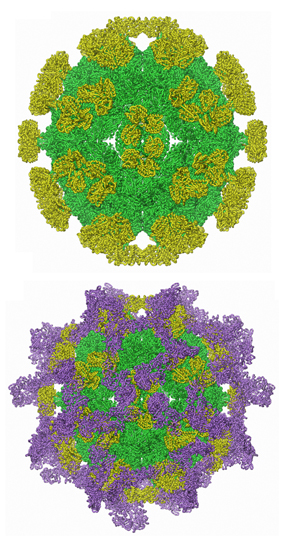 Top: An insect virus (shown in green) acts as a carrier for anthrax toxin receptor molecules (shown in yellow), which act like a sponge to soak up free toxin.

Bottom: When coated with toxin (shown in purple), the virus-like particles produced a potent toxin-neutralizing antibody response that protected rats from the lethal anthrax toxin after only a single immunization.

The new study, led by Scripps research scientists Anette Schneemann, Ph.D., and Marianne Manchester, Ph.D., and John A.T. Young, Ph.D., a professor in the Infectious Disease Laboratory at Salk, was published in the October issue of the journal PLoS Pathogens.

“The new anti-anthrax agent that we developed is an important and potentially critical development for anyone who works with the bacterium or those who might be exposed to it in a bioterrorism attack,” Schneemann said. “While other strategies are being pursued to develop improved anthrax vaccines, none of these offer the distinct advantage of combining the function of a vaccine with a potent antitoxin.”

Concerns about anthrax-a potentially fatal disease caused by the spore-forming, gram-positive bacterium Bacillus anthracis-as a weapon of bioterrorism has prompted increased efforts to develop better antitoxins and vaccines. The current vaccine, which was developed in the 1950s, is safe and effective, but requires multiple injections followed by annual boosters. Current anthrax treatment involves antibiotics such as ciprofloxacin and doxycycline that attack the bacteria but provide no protection against the dangerous toxins secreted by the bacteria.

The new study introduces a highly effective dual-action compound that leapfrogs current efforts to develop a second-generation anthrax vaccine. In the research, the scientists created a “multivalent display,” with multiple sites of attachment for recombinant protective antigen protein (PA), the primary component of the current anthrax vaccine, rather than only one. Virus-like particles coated with PA were found to produce a potent toxin-neutralizing antibody response that protected rats from the lethal anthrax toxin after only a single immunization.

The antitoxin strategy arose from the discovery and characterization of both known anthrax toxin receptors, ANTXR1 and ANTXR2, in the Young lab. “We have taken our knowledge of how anthrax toxin normally binds ANTXR2 on cell surfaces and used it to develop a platform that displays multiple copies of the receptor,” explains Young. “The receptor molecules can either act like a sponge to soak up free toxin, or as a potent vaccine when it is pre-bound to the toxin,” he adds.

The new anti-anthrax agent uses an insect virus as a carrier to display multiple ANTXR2 molecules on its surface. “Our approach was based on the assumption that a multivalent display of recombinant protective antigen protein would induce a far more potent immune response. That turned out to be correct,” explains Schneemann.

Specifically, the new vaccine-antitoxin combination is based on the multivalent display (180 copies) of the PA-binding von Willebrand A (VWA) domain of the ANTXR2 cellular receptor on the Flock House virus. The chimeric virus-like particle platform, which produces protective immunity and has been shown to be safe, inhibited lethal toxin action in in vitro and in vivo models of anthrax infection.

In fact, rats survived exposure to the toxin four weeks after a single injection of the new double-acting agent. This result suggests an extremely rapid production of neutralizing antibodies without the use of an adjuvant, a secondary agent that helps stimulate the immune system and is often used to increase the vaccine response-key goals for the development of third-generation anthrax vaccines.

“One important reason for the success of this project is that it arose from the multidisciplinary and highly collaborative efforts of our team of microbiologists, structural biologists, and immunologists,” said Manchester, who headed a NIH-funded Program Project grant that supported the work.

In addition to its use against anthrax, Schneemann notes that creating a multivalent platform may also have the potential to work against other infectious agents.

Other authors of the study, “A Viral Nanoparticle with Dual Function as an Anthrax Antitoxin and Vaccine,” are Darly J. Manayani, Vijay Reddy, Michael E. Pique, Marc E. Siladi, Diane Thomas, Kelly A. Dryden, and Marianne Manchester of The Scripps Research Institute; John M. Marlett, G. Jonah A. Rainey, Heather M. Scobie, and John A.T.Young of the Salk Institute for Biological Studies; and Mark Yeager of The Scripps Research Institute and the Scripps Clinic.

The study was supported by the National Institutes of Health.