Connecting the dots: How light receptors get their message across

Home - Salk News - Connecting the dots: How light receptors get their message across

Connecting the dots: How light receptors get their message across

LA JOLLA, CA—For a plant, light is life. It drives everything from photosynthesis to growth and reproduction. Yet the chain of molecular events that enables light signals to control gene activity and ultimately a plant’s architecture had remained in the dark. Now a team of researchers from the Salk Institute for Biological Studies and Duke University have identified the courier that gives the signal to revamp the plant’s gene expression pattern after photoreceptors have been activated by light.

“Light is probably the most important environmental cue for a plant,” says Howard Hughes Medical Institute investigator Joanne Chory, Ph.D., professor and director of the Plant Molecular and Cellular Biology Laboratory and holder of the Howard H. and Maryam R. Newman Chair. “Understanding how light signaling triggers morphological changes in the plant will have a really big impact on every facet of plant biology.”

Most animals are able to move away from unfavorable conditions, but plants are sessile and must cope with whatever comes their way. “They have developed an amazing plasticity to deal with varying environmental conditions,” says first author Meng Chen, Ph.D., formerly a postdoctoral researcher in the Chory laboratory and now an assistant professor in the Department of Biology at Duke University.

Their findings, which are published in the June 25 issue of Cell, bring scientists a photon closer to being able to harness plants’ phenotypic plasticity to help boost agricultural yields and manage weeds under challenging growing conditions.

Because plants are so reliant on light, they have evolved a number of different photoreceptors that are defined by the color of light they absorb. For example, photoreceptors absorbing in the red/far-red spectral range, also known as phytochromes, help sense the presence of other plants in their neighborhood by detecting changes in the color of light. Plants then use this information to direct their growth resources toward stem elongation rather than bulking up harvestable portions such as leaves and seed under low light conditions or conditions where competition from other plants is detected. 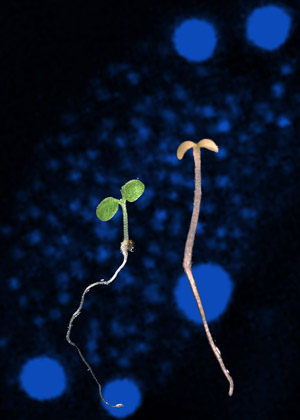 Plants without a functional HMR gene (shown on the right) are unable to respond to light. They fail to produce chlorophyll and grow into spindly albino seedlings that die young. Phytochrome nuclear bodies, which contain activated phytochrome and HEMERA are shown in the background (blue dots).

For many years, scientists used the length of the embryonic stem, or hypocotyl, to quantify a plant’s response to light. But scientists had still come up short in understanding the mechanisms involved in phytochrome’s earliest signaling events, explains Chen.

Other studies had shown that light directly regulates the relocation of phytochrome A (PHYA) and phytochrome B (PHYB) from the cytoplasm to the nucleus, where they congregate in distinct foci that are commonly referred to as phytochrome nuclear bodies. Sitting at the microscope for hundreds of hours allowed Chen to identify a new gene, HEMERA-named after the Greek goddess of day-based on his observation that PHYB could not be found in large nuclear bodies. When HEMERA was missing, plants were unable to respond to light, Chen explains, and grew into spindly, albino seedlings that died before they could make flowers.

Chen and his collaborators then found that in hemera mutants, key proteins that must be degraded by cells responding to light were still present, thereby making the seedling believe it was still in the dark. Digging deeper, they found striking structural similarities between HEMERA and the yeast protein RAD23, whose job it is to shuttle proteins flagged for destruction to the cellular junkyard. Thus, these nuclear bodies appear to be sites where key regulatory proteins go when they need to be removed from cells.

But Chen discovered that HEMERA does something else: It also slips into chloroplasts, small compartments that contain chlorophyll and are in charge of photosynthesis, which could explain the pale appearance of hemera mutants. “People had known for a long time that one of the things light does is to trigger the differentiation of chloroplasts after seedlings emerge from the ground,” says Chen. “But nobody knew what the trigger was.”

Although chloroplasts contain their own tiny genome, most proteins necessary for chloroplast maturation are encoded in the nucleus and need to be directed to their final destination. In order to ensure proper chloroplast differentiation, gene expression in the nucleus needs to be coordinated with gene expression in the chloroplast. “A protein that travels to both organelles could serve as a simple yet elegant solution to ensure coordinated gene activity in both locales,” says Chory. “Although we do not know what HEMERA is doing in the chloroplast, its presence in both the nucleus and chloroplast would ensure that the seedling has a rapid and appropriate response to light when it emerges from the soil.”

Researchers who also contributed to the study include Rafaelo M. Galvão and Meina Li at Duke University, as well as Brian Burger, Jane Bugea, and Jack Bolado at the Salk Institute for Biological Studies.