“If we can optimize plants’ natural ability to capture and store carbon, we can develop plants that not only have the potential to reduce carbon dioxide in the atmosphere but that can also help enrich soils and increase crop yields.”
Joanne Chory
Salk Professor and Harnessing Plants Initiative Founding Director

Global climate change is an existential threat to plants, animals and people. Too much atmospheric carbon is raising temperatures around the globe, generating deadly storms, catastrophic flooding and persistent droughts. This is not a problem for future generations to solve. We must address it now.

The Salk Institute’s Harnessing Plants Initiative (HPI) offers a bold, scalable solution that can be rapidly implemented. Plants are the original carbon scrubbers, removing CO2 from the atmosphere and storing it in their biomass. Unfortunately, this carbon storage is often temporary. When crops and other plants die and decompose, much of that carbon returns to the atmosphere.

HPI is an innovative approach that relies on Earth’s existing carbon storage mechanisms to help solve climate change. To keep more carbon in the ground, and store it in long-lasting roots, Salk scientists are developing a new generation of crop and wetland plants.

HPI is comprised of two programs: CRoPS (CO2 Removal on a Planetary Scale), which aims to develop crops called Salk Ideal Plants® that can store more carbon in the ground for longer; and CPR (Coastal Plant Restoration), which is working toward genetically informed restoration and preservation of the world’s wetlands, which act as signiﬁcant carbon sinks.

CO2 Removal on a Planetary Scale

The CO2 Removal on a Planetary Scale (CRoPS) project is developing Salk Ideal Plants, which puts CO2 in the ground and keeps it there. The key is suberin, a plant tissue that loves carbon and is already found in roots. By increasing root mass, depth and suberin content, Salk researchers will transform wheat, rice, corn and other crops into carbon-storing machines. In addition, more ground carbon means farmers benefit from improved soil health.

Watch this short video to learn more about Salk’s plans to use plants to tackle climate change. 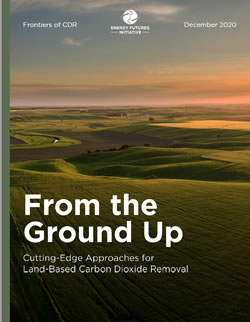 Salk Institute’s Harnessing Plants Initiative (HPI), which recently received a major grant from the Bezos Earth Fund, plans to develop traits of interest—roots with greater mass, depth, and decomposition-resistant suberin content—in model plants and then transfer them to food crops such as corn, soybeans, rice, wheat, cotton, and canola.