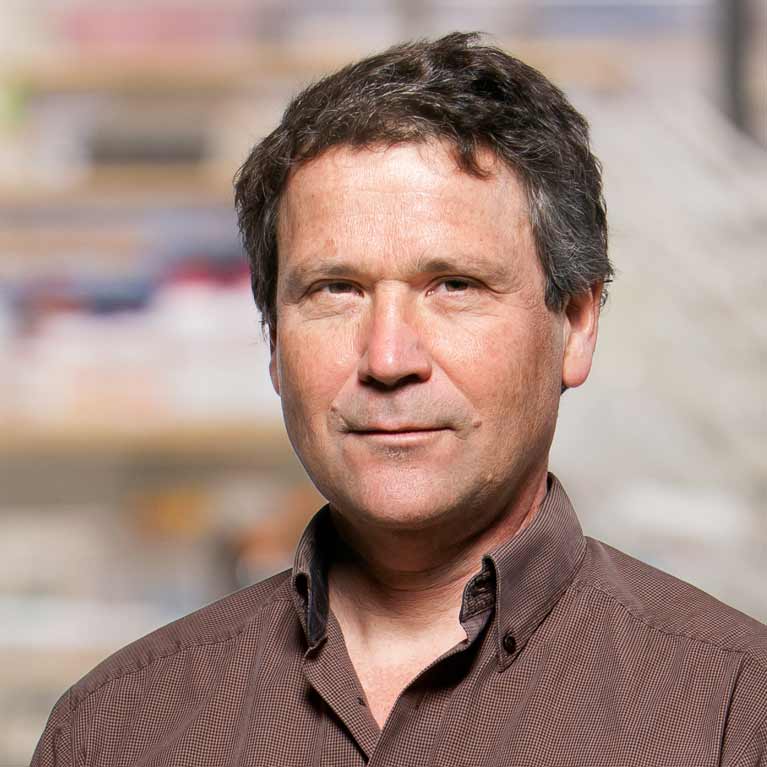 Christopher Kintner, PhD, studied the genes that govern how different cell types are generated during organ formation. For 35 years his work focused on neuronal cells in the developing nervous system as well as on cells that extend motile cilia, hair-like structures used to produce fluid flow.

In the first half of his time at the Salk Institute, Kintner studied the molecular events that occur when the nervous system forms during embryonic development. These studies revealed key genes that promote the formation of neurons, as well as genes that limit and prolong the process of neuron production. Work on the latter genes, which comprise the so-called Notch pathway, was particularly influential since this pathway was later found to influence the formation of cells in a variety of organ systems, and to be mutated in cancer. In addition, this work set the stage for using these genes to coax stem cells into neurons in the lab.

Later at Salk, Kintner focused on the development of cells with motile cilia. Cells extend motile cilia to produce directed fluid flow, which can function in a variety of ways. This activity is most prominent in the lung, where multiciliated cells line the airways and produce a vigorous fluid flow that clears mucus, pathogens and debris. Defects in these cells result from primary ciliary dyskinesia, a disorder in which an inherited genetic mutation causes defects in cilia movement. These multiciliated lung cells are also disrupted in a variety of respiratory ailments brought about by viral infections, smoking or cystic fibrosis.

Kintner’s work in this area showed that the gene FoxJ1 is sufficient to induce cells to form a motile cilium. He later identified a second gene called multicilin that instructs cells to not only turn on Foxj1 and make motile cilia, but also to generate the cilia-nucleating structures, called basal bodies, which allow a cell to form hundreds of cilia. This discovery led to the finding that patients who lack ciliated cells in the lungs have mutations in multicilin. In the future, multicilin could be used to coax stem cells to form new cilia to treat diseases.

Finally, his work in this area has also focused on how cells become oriented so that they point their beating cilia in the same direction, much like the hair on one’s arm. This work led to discoveries showing that cells initially acquire this polarity by oriented mechanical forces acting via the planar cell polarity pathway. These studies also revealed a feedback mechanism where beating cilia respond to flow to orient themselves more precisely.

Kintner earned his undergraduate degree in biochemistry and PhD in molecular biology at the University of Wisconsin. He completed postdoctoral fellowships at the California Institute of Technology, King’s College London, and Harvard University. He has been recognized with several prestigious awards, including a McKnight Fellowship and an Alfred Sloan Fellowship.