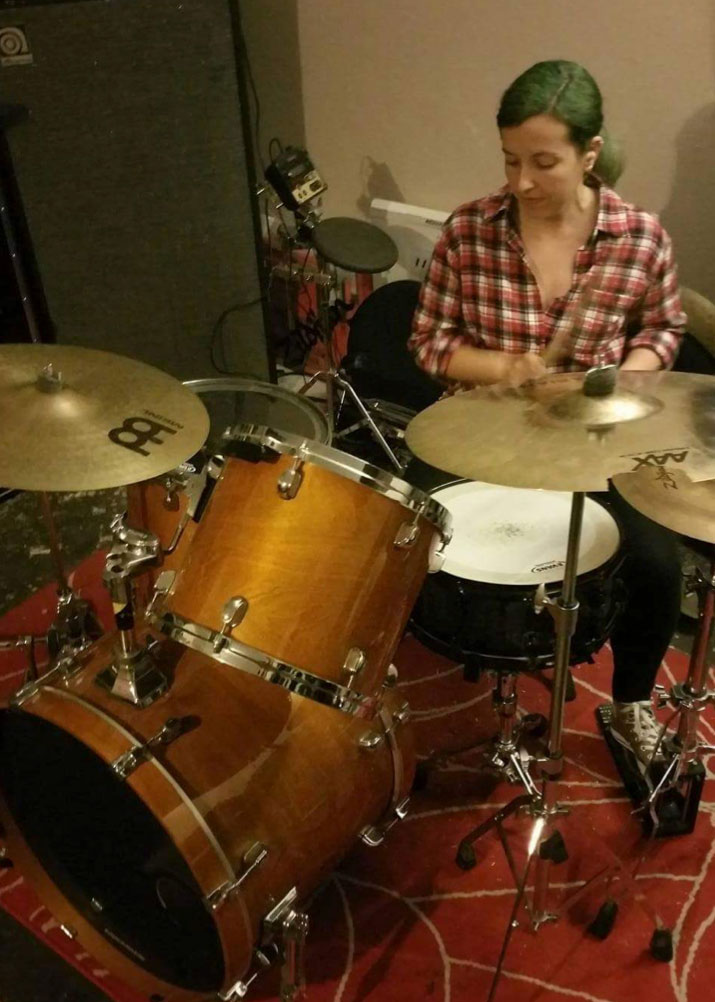 What do punk rock music, the martial art of muay thai and neuroscience have in common? They’re all passions of Salk Postdoctoral Scholar Elena Blanco. As a member of Nicola Allen’s lab, Blanco studies cells called astrocytes, which she terms “the security guards of the brain.” We’ll hear about her childhood in Spain, California dreaming, and why she enjoys explaining science at schools, gyms and even at bars.

Margot: Welcome to Salk Talk. I’m your host, Margot Wall. Today, I am speaking to Elena Blanco, a postdoctoral fellow in Nicola Allen’s lab. She’ll be talking about her childhood in Spain, her case of California dreaming, and how she explains science at schools, bars and gyms, but first, an introduction.

Elena: Pink hair and tattoos are not exactly the match for a neuroscientist in your head. [People] don’t believe me sometimes. My name is Elena Blanco, I’m from Spain. So I grew up in Oviedo, which is a smallish hometown. I think 200,000 people live there. Yeah, I went to a mixed school, boys and girls all together. It was a Catholic school. We had this particular teacher, she was trying to convince us that evolution wasn’t the right thing, so that also happens outside the States.

Margot: Luckily, evolution was acknowledged in her high school, and she reveled in the wonders of biology.

Elena: I remember that, I just thought it was amazing how life could be made, just from nucleic acids and fatty acids, proteins. I turned 18, and started university, and that’s when I decided to [get] my degree in biology. I was wondering if my degree in Spain would have the same value outside Spain, and this [is the] kind of thing nobody really explains to you if you want to go and study abroad, so I had to figure everything out on my own.

Margot: Elena got her doctorate at the University of Bristol. Afterwards, she decided that California was the place for her to continue her studies as a postdoctoral fellow.

Elena: I wanted to come to California because everything that I like, music-wise and literature, was from California. So I thought, well, that must be an amazing place, if everything that I like is coming from there, but it didn’t feel [it was] enough just to come and visit. I was like, no, I want to try and live there, and see why it’s so special. I mean, it’s like, most of the big science is happening here, so it’s not that I wanted to move to, you know, Kentucky.

Margot: Elena studies an often-overlooked cell type in our brains.

Elena: We have many different cells in our brains, it’s not that we only have neurons. So what we study in our lab is astrocytes, which are another kind of brain cell that we have, and [until recently] these astrocytes were considered the security guards, let’s say, in our brain. So [their role] would be protecting neurons, which are maybe the most important cells because those are the ones that communicate to each other. But a few years ago, they discovered that these astrocytes are also involved in the right development of neurons. A lot of people started studying them and considered them in terms of development of some disorders like autism or schizophrenia. One of the characteristics of this disease is that neurons are not communicating correctly. It might be that these astrocytes are actually not helping in the way that they are supposed to. What’s failing, what’s the problem in this astrocytic help? The first step to know this is to know which kind of proteins astrocytes are producing and sending to neurons.

Margot: I asked Elena to take me through her typical day, in and outside of the lab.

Elena: I usually get to the lab, make coffee, plan everything. I have everything written down because otherwise so many experiments, I just forget everything. I like keeping myself very busy. I don’t know, I get very anxious if I have nothing to do. I’m also practicing Muay Thai. I train, pretty much, every weekday for one hour, one hour and a half. So after work, I just go to the gym and fight. [Also] I volunteer in the science museum, in the Reuben H. Fleet in Balboa Park. I go and help with, what they call, “Girls Science Club.Ó It’s for girls who are 10, 11, 12. There are some amazing girls Ñ they are really into science.

Margot: Music is a big part of Elena’s life. She spends many nights rocking out to her favorite bands at local music venues.

Elena: I used to listen to a lot of punk rock and punk pop. Then I started to be more into hardcore … what some people would say [is] noisy music. Our brains tell us which music we’re gonna like. When I was a teenager growing up and listening to that music, my parents were really annoyed all the time, asked me to turn it down or, you know, turn it off. But recently, I’ve been trying to learn to play the bass. Now, if I could find people who want to jam, it’d be pretty cool and it’d be nice to see more girl bands. I always find it amusing to tell people that I’m a neuroscientist. The places that I meet people is usually these, like, punk-rock shows or in a brewery. For instance, in the gym, they’re like, “Oh, you’re a neuroscientist? So what happens to my brain when I get knocked out?” I really like to find the kinds of people who are very interested and they want to know [more], even though they are not familiar with science at all. My name is Elena Blanco.

Margot: Thanks for listening to this episode of Salk Talk.