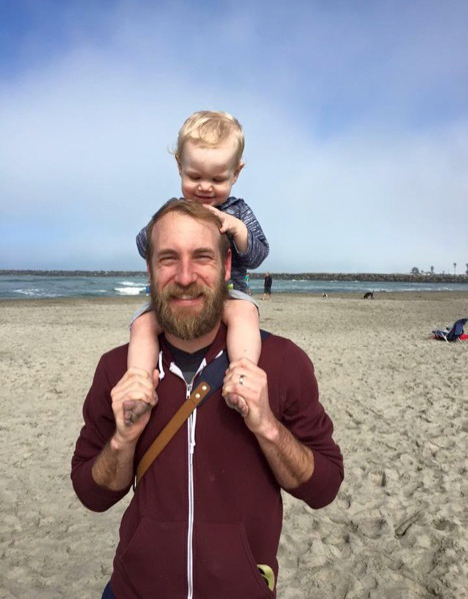 Primary season may be over, but Bernie Salamanders lives on! He’s the Dungeons & Dragons alter ego of Salk’s Chris Howard, a postdoctoral scholar in the lab of Xin Jin. When Howard is not playing D&D, he studies the neurotransmitter dopamine, which is implicated in diseases like Parkinson’s and drug addiction. He’ll tell us the bittersweet story of why he got interested in neuroscience and how music is a big part of his life.

Margot: You are listening to Salk Talk. I’m your host, Margot Wohl. Today, I will be chatting with postdoc Chris Howard at his house in Clairemont Mesa, in the heart of San Diego, where we discuss how he became interested in brain science, his life as a rock star, and his new role as a dad, all over a glass of iced tea.

Chris: My name is Chris Howard, I’m in Xin Jin’s lab, at the Salk Institute for Biological Studies. We’re in my living room right now, sitting on my sectional couch with Henry, my 15-month-old baby, and my dog, Jackson. I think everybody who is interested in the brain has some personal experience with some neurological disorder, either directly or indirectly, through people they know or through their own life experiences. And for me, I had three grandparents who had dementia, two of whom had confirmed Alzheimer’s disease, and I can tell you one anecdote that I thought was both sad and kind of the coolest thing that I’ve ever seen at the same time. My grandpa was a music composer. He, you know, had trouble remembering who people were and things like that, but if you put him in front of a keyboard, then he would flawlessly play any song you can think of from his era, you know. And he knew every note of the song, so very clearly there was some difference in that music memory versus that, sort of, you know, social memory or episodic memory. I noticed that very early on, and I thought that was extremely fascinating and immediately realized that I wanted to know more about how the brain worked.

Margot: Chris’ fascination with the brain led him to his current role as a research scientist, trying to unify diverse theories about the role of the neuromodulator dopamine.

Chris: I study basal ganglia, which is a subcortical region of the brain that’s very important in motor learning, and it’s been really highly implicated in a lot of maladaptive traits like Parkinson’s disease, things like that, but also drug addiction is very important in basal ganglia. We study a neurotransmitter called dopamine, so there’s a strong, historical implication of dopamine being involved in movement. Now that idea has gone by the wayside in more recent time. Dopamine, if you google dopamine, right, you’re gonna see stuff about rewards, like cheeseburgers, or sex, or drugs, things like that. We have taken a new approach to dopamine, and want to try to unify the field, in a way. So, what we’re trying to do now is look at dopamine not as a learning signal, but more as something that conveys information about what’s going on right now, to help you and guide your actions, according to the environment.

Margot: Next, Chris describes his mentor.

Chris: So he’s scaly, kind of lizard-looking, a little bit taller than a normal person.

Chris: Oh, gosh. I wasn’t prepared to go down that road. He is a dragon-born paladin, which means he’s half-dragon, so he wears all this, like, you know, heavy armor. And he’s, sort of, like, a crusader-type, so he’s fighting the good cause for the people, kind of guy, and so, I have named him Bernie Salamanders. He blows fire, so that’s the Bernie-part, you know?

Chris: And Salamanders, you know, lizard.

Margot: You may have heard babbling in the background from the rambunctious Henry, Chris and his wife, Annie’s, two-year-old son. Here he is attempting to communicate with artificial intelligence.

Chris: My son has learned to talk to smart phones, which is really terrifying because he doesn’t even talk to people yet. Chris, to Henry: Do you want to talk to Siri? Henry: Dat! Siri: Sorry, I’m not sure what you said. It’s tough because, you know, when you’re in science, you want to spend a lot of time in the lab, and then you always have to do that. Every minute you spend in the lab, you’re not spending it at home, right? So, yeah, it’s been the hard part. For me, I was very fortunate because my wife, Annie, shouldered a lot of the weight so I don’t think I’m the typical postdoc with a kid.

Margot: Chris is not the ordinary postdoc for other reasons, like his past and present as a bandleader.

Chris: I play music so that I don’t have to think about science for a while. I’ve toured and stuff, we put out a record and tried to make it for a long time, but… And it was a really great experience, it was really fun. But I still write songs and I still really enjoy it. I’m playing with one group full-time now, I mean full-time, like, once a month, we all went to the studio, just, like, a few weeks ago and recorded a song. It’s called “California Knows.” This song is about the parts of the Midwest that I have now romanticized.

Margot: We are listening to a song about his mellow Midwest memories and Chris is on vocals. [music] Well, I miss the pouring rain, the sun and fields of green. Well, these lands are for our snow, it’s for plants and bees so old. With the air so dry it stands, and the summer never ends. So many people now, so lost in this crowd. So lost. California knows, so the chill will let us go. Waiting for the cold. California soul, oh the chill will take her toll. While you wait to go and to take our stand. Returnin’ to our homeland.

Margot: Thanks for listening to this episode of Salk Talk.