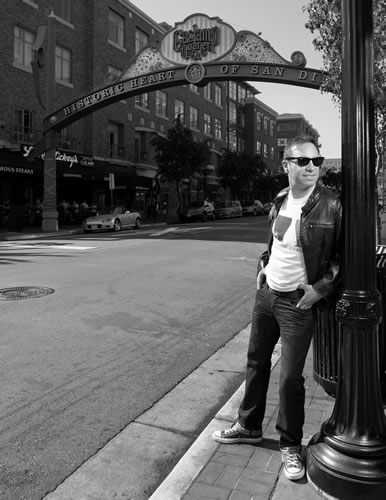 An Ecuadorian child actor, Pablo Hollstein now resides at the Salk Institute in Reuben Shaw’s lab where he studies cancer. We will touch on his former acting career after we visit how he fosters community at the Salk, his adventurous eating, and why he is passionate about studying cancer.

Margot: Welcome to Salk Talk, a podcast from the Salk Institute for Biological Studies in La Jolla, California. I’m your host, Margot Wohl.

Margot: This Ecuadorian childhood star resides at the Salk Institute in Reuben Shaw’s lab where he studies cancer. We will touch on his former acting career but first, we’re going to visit how he fosters community at the Salk, his adventurous eating, and why he is passionate about studying cancer.

Pablo: My name is Pablo Hollstein. I like a lot getting people together. That’s pretty fun because I get to scope out new places, organize events, social events, happy hours, things like that.

Margot: As the chair of Salk Society for Research Fellows, an all-volunteer group comprised of trainees, he does much more than organize social events.

Pablo: A little bit of everything. There’s academic development. There’s mentoring, peer to peer and also faculty-trainee mentoring, professional development, community outreach events, like Salk Fest, the Salk food drive that happens once a year. Basically make the experience of training at Salk a better one.

Margot: An explorer at heart, Pablo takes me through some of his eating adventures.

Pablo: So I love to sample and learn about foods from different, cuisines from different parts of the world. Exotic may or may not be delicious. Haggis, which is a Scottish delicacy. A can of preserved fish, it’s a very traditional ancient delicacy from Sweden, which is so potently stinky that you cannot even open the can indoors. I would say not for the faint of heart. Pretty much along the ways of a scientist, so you’re always trying, looking, seeking to find something new. So that could be a new flavor of a dish or a drink or a science result.

Margot: Speaking of scientific results, I asked Pablo the secret to being a successful scientist.

Margot: Pablo found his passion when shadowing physicians as he encountered patients whose illnesses could not be cured.

Pablo: If the reason we can’t help these patients is because we don’t understand what’s going on with them, I’d rather try to understand what’s happening to them so that we could then help them in the future. Through my training, I’ve become very keen on trying to understand how cancer happens, how you go from a mutation in one gene, in one little cell that amplifies into actually you having a disorder or a disease. What are the genes that are critical in promoting tumor genesis? How we could then leverage that knowledge to learn where we should intervene in terms of developing new therapies that might be of impact to patients.

Margot: Okay, so finally, to explain his past in a soap opera, his boyish good looks caught the eye of Ecuadorian TV producers.

Pablo: So when I was a little kid, I had a small part in an Ecuadorian soap opera. The sad part is I was in line to be the protagonist, so I was about to take the whole thing, but they gave it to somebody else. And they wanted to keep me in the production so I stuck around as an extra. There were shots of me crossing back and forth in the background. Now you’re bringing all these memories back. I’m like, “Yep, I was actually in a spot that they did in Spanish.” So it was one of these flashback roles where it’s all from my point of view, thinking about my friend Jose who was the best soccer player, the most popular kid in school and all this, and we’re driving recklessly around somewhere, and of course, there’s a big crash. I see we’re going to crash, so I have to say [foreign language], and then we crash.

The next scene we’re in the hospital. His parents are like, “Jose, my son, Jose.” And so the question that I always post to people is, “What do you think happened to Jose as a consequence of all this reckless driving?” He ends up getting his leg amputated so he can never play soccer again.

Margot: Wow, that was a dark turn. I hope Jose learned his lesson. To end the interview on a lighter note, Pablo’s lab mates are helping him assimilate into U.S. culture by schooling him on the musical history he missed during his childhood in Ecuador. To speed up his introduction to hip-hop, I figured I could help Pablo make his first rap song.

Thanks for listening to Salk Talk, a podcast from the Salk Institute for Biological Studies in La Jolla, California. A global leader in basic research, the Salk Institute is home to an internationally renowned faculty that makes groundbreaking contributions to our understanding of aging, cancer, immunology, brain science, and more. To learn about the Salk, visit us at www.salk.edu.