What can the water monster teach us about tissue regeneration in humans?

Home - Salk News - What can the water monster teach us about tissue regeneration in humans?

What can the water monster teach us about tissue regeneration in humans?

LA JOLLA, CA—Based on two new studies by researchers at the Salk Institute for Biological Studies, regeneration of a new limb or organ in a human will be much more difficult than the mad scientist and supervillain, Dr. Curt Connors, made it seem in the Amazing Spider-man comics and films.

As those who saw the recent “The Amazing Spiderman” movie will know, Dr. Connors injected himself with a serum made from lizard DNA to successfully regrow his missing lower right arm – that is, before the formula transformed him into a reptilian humanoid.

Salk research shows that in the axolotl, a Mexican salamander, jumping genes have to be shackled or they might move around in the genomes of cells in the tissue destined to become a new limb, and disrupt the process of regeneration.

But by studying a real lizard-like amphibian, which can regenerate missing limbs, the Salk researchers discovered that it isn’t enough to activate genes that kick start the regenerative process. In fact, one of the first steps is to halt the activity of so-called jumping genes.

In research published August 23 in Development, Growth & Differentiation, and July 27 in Developmental Biology, the researchers show that in the Mexican axolotl, jumping genes have to be shackled or they might move around in the genomes of cells in the tissue destined to become a new limb, and disrupt the process of regeneration.

They found that two proteins, piwi-like 1 (PL1) and piwi-like 2 (PL2), perform the job of quieting down jumping genes in this immature tadpole-like form of a salamander, known as an axolotl – a creature whose name means water monster and who can regenerate everything from parts of its brain to eyes, spinal cord, and tail.

“What our work suggests is that jumping genes would be an issue in any situation where you wanted to turn on regeneration,” says the studies’ senior author, Tony Hunter, a professor in the Molecular and Cell Biology Laboratory and director of the Salk Institute Cancer Center.

“As complex as it already seems, it might seem a hopeless task to try to regenerate a limb or body part in humans, especially since we don’t know if humans even have all the genes necessary for regeneration,” says Hunter. “For this reason, it is important to understand how regeneration works at a molecular level in a vertebrate that can regenerate as a first step. What we learn may eventually lead to new methods for treating human conditions, such as wound healing and regeneration of simple tissues.” 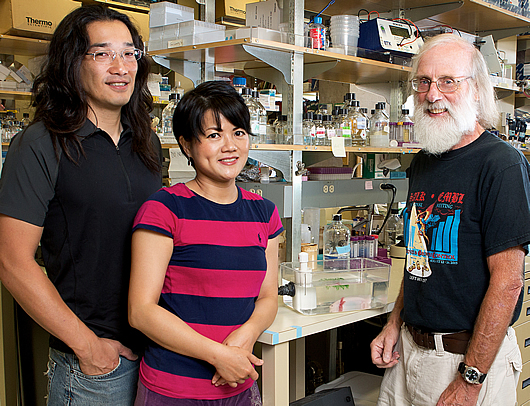 From left: Salk researchers Gerald M. Pao, Wei Zhu, and Tony Hunter, a professor in the Molecular and Cell Biology Laboratory and director of the Salk Institute Cancer Center.

The research team, which included investigators from other universities around the country, sought to characterize the transcriptional fingerprint emerging from the early phase of axolotl regeneration. They specifically looked at the blastema, a structure that forms at a limb’s stump.

There the scientists found transcriptional activation of some genes, usually found only in germlime cells, which indicated cellular reprogramming of differentiated cells into a germline state.

In the Development, Growth & Differentiation study, the research team, led by Wei Zhu, then a postdoctoral researcher in Hunter’s laboratory, focused on one of these genes, the long interspersed nucleotide element-1 (LINE-1) retrotransposon.

LINE-1 elements are jumping genes that arose early in vertebrate evolution. They are pieces of DNA that copy themselves in two stages – first from DNA to RNA by transcription, and then from RNA to DNA by reverse transcription. These DNA copies can then insert themselves into the cell’s genome at new positions.

A few years ago, Fred Gage, professor in the Laboratory of Genetics at the Salk Institute, discovered that LINE-1 elements move around during neuronal development, and may program the identities of individual neurons.

“Most of these copies appear to be ‘junk’ DNA, because they are defective and can never jump again,” says Hunter. But all mammals, including humans, still have active LINE-1 genes, and the salamander, whose genome is 10 times larger than a human’s, contains many more.

Active LINE-1 retrotransposons can keep jumping, and that was true in the developing blastema where LINE-1 jumping was dramatically switched on. But in the researchers’ companion study, in Developmental Biology, they found that PL1 and PL2 switch off transcription of repeat elements, such as LINE-1. “The idea is that in the development of germ cells, you definitely don’t want these things hopping around,” says Hunter. “The mobilization of these jumping genes can introduce harmful genomic rearrangements or even abort the regeneration process.”

In fact, when the researchers inhibited PL1 and PL2 activity in the axoloti limb blastema, regeneration was significantly slowed down.

“The need to switch on one set of genes to stop other genes from jumping just illustrates how amazingly difficult it would be to regenerate something as complex as a limb in humans,” Hunter says. “But that doesn’t mean we won’t learn valuable lessons about how to treat degenerative diseases.”

The work was supported by grants from the National Cancer Institute, the U.S. Public Health Service, and an Innovation Grant from the Salk Institute.