Study finds that hormonal response is stronger in people with Williams syndrome, shedding light on the biological underpinnings of social disorders

Study finds that hormonal response is stronger in people with Williams syndrome, shedding light on the biological underpinnings of social disorders

LA JOLLA, CA—The hormone oxytocin—often referred to as the “trust” hormone or “love hormone” for its role in stimulating emotional responses—plays an important role in Williams syndrome (WS), according to a study published June 12, 2012, in PLoS ONE.

The study, a collaboration between scientists at the Salk Institute for Biological Studies and the University of Utah, found that people with WS flushed with the hormones oxytocin and arginine vasopressin (AVP) when exposed to emotional triggers.

The findings may help in understanding human emotional and behavioral systems and lead to new treatments for devastating illnesses such as WS, post-traumatic stress disorder, anxiety and possibly even autism. 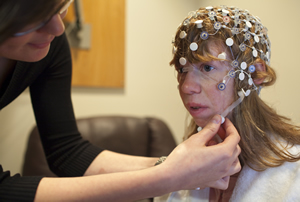 Kirsten Gilham, a young woman with Williams Syndrome undergoes an ERP test – event related potential test. The test measures the electrical activity of the brain at the level at the scalp.

“Williams syndrome results from a very clear genetic deletion, allowing us to explore the genetic and neuronal basis of social behavior,” says Ursula Bellugi, the director of Salk’s Laboratory for Cognitive Neuroscience and a co-author on the paper. “This study provides us with crucial information about genes and brain regions involved in the control of oxytocin and vasopressin, hormones that may play important roles in other disorders.”

WS arises from a faulty recombination event during the development of sperm or egg cells. As a result, virtually everyone with WS has exactly the same set of genes missing (25 to 28 genes are missing from one of two copies of chromosome 7). There also are rare cases of individuals who retain one or more genes that most people with the disorder have lost.

To children with WS, people are much more comprehensible than inanimate objects. Despite myriad health problems they are extremely gregarious, irresistibly drawn to strangers, and insist on making eye contact. They have an affinity for music. But they also experience heightened anxiety, have an average IQ of 60, experience severe spatial-visual problems, and suffer from cardiovascular and other health issues. Despite their desire to befriend people, they have difficulty creating and maintaining social relationships, something that is not at all understood but can afflict many people without WS.

In the new study, led by Dr. Julie R. Korenberg, a University of Utah professor and Salk adjunct professor, the scientists conducted a trial with 21 participants, 13 who have WS and a control group of eight people without the disorder. The participants were evaluated at the Cedars-Sinai Medical Center in Los Angeles. Because music is a known strong emotional stimulus, the researchers asked participants to listen to music.

Before the music was played, the participants’ blood was drawn to determine a baseline level for oxytocin, and those with WS had three times as much of the hormone as those without the syndrome. Blood also was drawn at regular intervals while the music played and was analyzed afterward to check for real-time, rapid changes in the levels of oxytocin and AVP. Other studies have examined how oxytocin affects emotion when artificially introduced into people, such as through nasal sprays, but this is one of the first significant studies to measure naturally occurring changes in oxytocin levels in rapid, real time as people undergo an emotional response.

There was little outward response to the music, but when the blood samples were analyzed, the researchers were happily surprised. The analyses showed that the oxytocin levels, and to a lesser degree AVP, had not only increased but begun to bounce among WS participants while among those without WS, both the oxytocin and AVP levels remained largely unchanged as they listened to music.

Korenberg believes the blood analyses strongly indicate that oxytocin and AVP are not regulated correctly in people with WS, and that the behavioral characteristics unique to people with WS are related to this problem.

“This shows that oxytocin quite likely is very involved in emotional response,” Korenberg says.

To ensure accuracy of results, those taking the test also were asked to place their hands in 60-degree Fahrenheit water to test for negative stress, and the same results were produced as when they listened to music. Those with WS experienced an increase in oxytocin and AVP, while those without the syndrome did not.

In addition to listening to music, study participants already had taken three social behavior tests that evaluate willingness to approach and speak to strangers, emotional states, and various areas of adaptive and problem behavior. Those test results suggest that increased levels of oxytocin are linked to both increased desire to seek social interaction and decreased ability to process social cues, a double-edged message that may be very useful at times, for example, during courtship, but damaging at others, as in WS.

“The association between abnormal levels of oxytocin and AVP and altered social behaviors found in people with Williams Syndrome points to surprising, entirely unsuspected deleted genes involved in regulation of these hormones and human sociability,” Korenberg said. “It also suggests that the simple characterization of oxytocin as ‘the love hormone’ may be an overreach. The data paint a far more complicated picture.”

Overall, the researchers say, their findings paint a very hopeful picture, and the study holds promise for speeding progress in treating WS, and perhaps Autism and anxiety through regulation of these key players in human brain and emotion, oxytocin and vasopressin.

The study was funded by the National Institutes of Health and the McDonnell Foundation.