LA JOLLA, CA—The first architecture critic may have been Goldilocks. She complained that some things were too big and some too small, while others were “just right.” Yet how do architects determine what is just right? And why do we feel instantly at home in some spaces, while never feeling right in others?

These are questions for neuroscientists, not just architects, explains Thomas D. Albright, of the Salk Institute, newly appointed president of the Academy of Neuroscience for Architecture (ANFA), who begins his term in January 2013. The organization, focused on the intersection of brain research and building design, recently hosted over 150 scientists and architects at its first annual conference at Salk. It has just announced its first grants program, with a submission period of November 1 to December 15, 2012. The grants are intended to encourage both architects and neuroscientists to explore incorporating the latest ideas in brain research into building design, and may award up to $50,000 to cross-disciplinary teams. 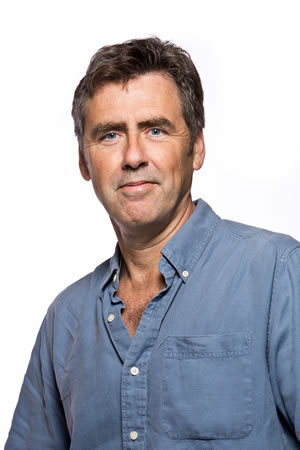 Thomas D. Albright, professor and director of the Salk’s Vision Center Laboratory, was appointed president of the Academy of Neuroscience for Architecture.

“Good architects have lots of intuitions, and that’s why good architecture works,” says Albright, professor and director of Salk’s Vision Center Laboratory. “Our hope is that we can identify principles backing up those intuitions that are more deeply rooted in knowledge about how the brain works. We’d like to be able to identify, for example, what particular elements would give you a better space for learning.”

ANFA grew out of a 2003 American Institute of Architects (AIA) conference that was held in San Diego, a city known for both innovative architecture and world-class neuroscience. Reflecting its interdisciplinary roots, ANFA’s first president was John Paul Eberhard, founding dean of the State University of New York at Buffalo’s School of Architecture and Planning. Its second president was Salk neuroscientist Fred H. Gage, who is renowned for demonstrating that human beings can grow new brain cells throughout life.

From ancient times, explains Albright, architecture has combined the aesthetic, the pragmatic and a sense that some might call spiritual-the notion that we feel more in harmony with certain spaces than others. The Hindu Vaastu Veda, for instance, is a system of building design based on a religious doctrine of spiritual energies. According to this system, a house’s very blueprint can increase the well-being of its occupants. Similarly, Chinese feng shui tries to align energies within architectural spaces. And classical Greek architecture established the “Golden Mean,” a ratio that renders structures from the Parthenon to Venice’s St. Mark’s Basilica especially pleasing.

While there is a great deal that still needs to be studied and tested to develop an “evidence-based architecture,” what ANFA ultimately hopes to do, says Albright, is create a certification that would ensure a building followed brain-based principles of design, in the same way that LEED-certified buildings conform to the best environmentally based practices.

As examples of how these ideas might be applied, Albright’s former graduate student, Karen Dobkins, now a professor at University of California San Diego, studies how the visual system develops in infants and whether it might be possible to design a nursery to optimize visual development. Salk scientist Satchidananda Panda discovered that a light receptor, called melanopsin, senses blue light and tells the brain when to sleep or be alert. His work has already inspired architects to redesign the lighting in workplaces, hospitals and homes. It’s also well known that people feel less stress in buildings with higher ceilings, according to Albright. 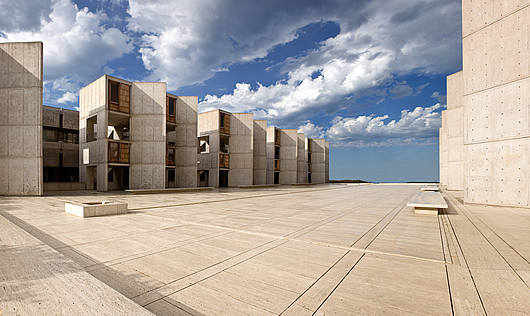 The buildings of the
Salk Institute have been hailed widely as a masterpiece of modern architecture.

Such innate responses are a product of brain structure and evolution. Since before we were even living in caves, our visual systems evolved to process the natural environment, which determines how we organize information. Essentially, the brain is sorting on a “need to know” basis. “Our brains are quick to assign certain objects to the background, while expending energy on things that are behaviorally important,” explains Albright, “so more attention goes to the predator, not the tall grass in which it’s hiding.”

This survival-based mechanism might possibly underlie some of our sense of aesthetics. “Although it’s hard to prove, the things that are simple to process may be the things we most like to look at,” says Albright. The Salk Institute itself, which won a 25-year award from the AIA, may derive some of its beauty from the simplicity of its rectangular shapes, according to Albright.

Yet at the same time, the way we process information is “tunable” to a particular environment, meaning our awareness levels may adjust over time. “If we grow up in, say, a restored Victorian with William Morris wallpaper and intricately carved furniture, we will actually be more sensitive to tiny details in our environments than someone who grows up with the clean lines and uncluttered surfaces of a Mies van der Rohe home,” says Albright.

That of course suggests more challenges for architects: It isn’t simply that someone may like one room more than another, they may actually perceive it differently.

These challenges and questions are what ANFA hopes to address, as its members strive to design the next generation of public and private buildings. “There are things that architects can do that can tap into the natural organization of the brain,” says Albright. “As a neuroscientist, I welcome the opportunity to share these ideas with other professionals.