Site for alcohol's action in the brain discovered

Site for alcohol’s action in the brain discovered

LA JOLLA, CA—Alcohol’s inebriating effects are familiar to everyone. But the molecular details of alcohol’s impact on brain activity remain a mystery. A new study by researchers at the Salk Institute for Biological Studies brings us closer to understanding how alcohol alters the way brain cells work.

Their findings, published in the current advance online edition of Nature Neuroscience, reveal an alcohol trigger site located physically within an ion channel protein; their results could lead to the development of novel treatments for alcoholism, drug addiction, and epilepsy. 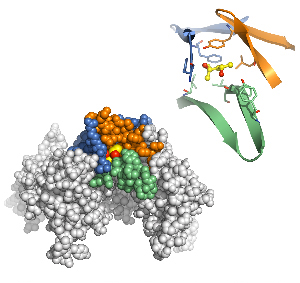 Bottom: X-ray crystallography revealed a binding site for alcohol in an ion channel that plays a key role in several brain functions associated with drugs of abuse and seizures. Top: Detailed view of the alcohol binding pocket with the ethanol molecule shown in yellow and red.

Ethanol, the alcohol in intoxicating beverages, is known to alter the communication between brain cells. “There’s been a lot of interest in the field to find out how alcohol acts in the brain,” says Paul A. Slesinger, Ph.D., an associate professor in the Peptide Biology Laboratory at the Salk Institute, who led the study. “One of several views held that ethanol works by interacting directly with ion channel proteins, but there were no studies that visualized the site of association.”

Slesinger and his team now show that alcohols directly interact with a specific nook contained within a channel protein. This ion channel plays a key role in several brain functions associated with drugs of abuse and seizures.

Previous research by Slesinger and his group focused on the neural function of these ion channels, called GIRK channels. GIRK channels, short for G-protein-activated inwardly rectifying potassium channels, open up during periods of chemical communication between neurons and dampen the signal, creating the equivalent of a short circuit.

“When GIRKs open in response to neurotransmitter activation, potassium ions leak out of the neuron, decreasing neuronal activity,” says UCSD Biology graduate student and first author Prafulla Aryal. Alcohols had been previously shown to open up GIRK channels but it was not known whether this was a direct effect or whether this was the by-product of other molecular changes in the cell.

Having the location of a physical alcohol-binding site important for GIRK channel activation could point to new strategies for treating related brain diseases. Using this protein structure, it may be possible to develop a drug that antagonizes the actions of alcohol for the treatment of alcohol dependence. Alternatively, “If we could find a novel drug that fits the alcohol-binding site and then activate GIRK channels, this would dampen overall neuronal excitability in the brain and perhaps provide a new tool for treating epilepsy,” says Slesinger. 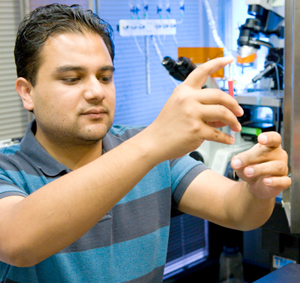 Epilepsy is a neurological disease characterized by episodic, abnormal electrical activity that affects more than 3 million Americans. Current medications have serious side effects and the search for new, specific mechanisms of treatment is an area of intense research across the globe.

To gain more insight into how alcohols work, Slesinger and Aryal teamed up with Salk colleagues Senyon Choe, Ph.D., a professor in the Structural Biology Laboratory, and Hay Dvir, Ph.D., a postdoctoral researcher in Choe’s lab, to determine whether tiny pockets found in a high resolution, three-dimensional structure of a potassium channel were, in fact, the sites of alcohol action in GIRK channels. The Salk researchers noted the similarity of these candidate alcohol-binding sites with alcohol pockets visualized in two other alcohol-binding proteins: alcohol dehydrogenase, the enzyme that breaks down alcohol in the body, and a fruit fly protein, LUSH, that senses alcohol in the environment.

When Aryal systematically introduced amino acid substitutions that denied alcohol molecules access to the potential alcohol binding site, alcohol could no longer efficiently activate the channel, confirming that they had hit upon an important regulatory site for alcohol. The team further established that this pocket is a trigger point for channel activation since G protein activation was also altered. “We believe alcohol hijacks the intrinsic activation mechanism of GIRK channels and stabilizes the opening of the channel,” says Aryal. “Alcohol may accomplish this by lubricating the activation gears of the channel,” adds Slesinger.

This work was supported by National Institutes on Alcohol Abuse and Alcoholism and on General Medical Sciences, the H.N. & Frances Berger Foundation and the Salk Institute for Biological Studies.