LA JOLLA, CA—Reviving a theory first proposed in the late 1800s that the development of organs in the normal embryo and the development of cancers are related, scientists at the Salk Institute for Biological Studies have studied organ development in mice to unravel how breast cancers, and perhaps other cancers, develop in people. Their findings provide new ways to predict and personalize the diagnosis and treatment of cancer.

In a paper published February 3 in Cell Stem Cell, the scientists report striking similarities between genetic signatures found in certain types of human breast cancer and those of stem cells in breast tissue in mouse embryos. These findings suggest that cancer cells subvert key genetic programs that guide immature cells to build organs during normal growth.

“Stem cells in a healthy developing embryo have a GPS system to alert them about their position in the organ,” says Geoffrey Wahl, a professor in Salk’s Gene Expression Laboratory, who led the research. “The system depends on internal instructions and external signals from the environment to tell the stem cell what to do and where to go in the body. It stimulates the stem cells to grow and form more stem cells, or to change into different cells that form complex organs, such as the breast. Our findings tell us that this GPS system is broken during cancer development, and that may explain why we detect stem-like cells in breast cancers.” 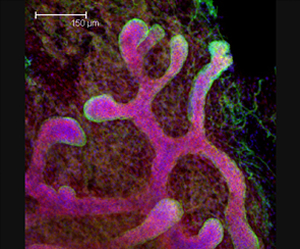 The relationship between cancer and embryonic tissues was first proposed in the 1870s by Francesco Durante and Julius Cohnheim, who thought that cancers originated from cells in adults that persist in an immature, embryonic-like state. More recently, scientists including Benjamin Spike, a co-first author on the current work and post-doctoral fellow in the Wahl lab, have discovered that tumors often contain cells with stem cell characteristics revealed by their genetic signatures.

Studying the genetic activity of organ-specific stem cells is very difficult because the cells are very rare, and it is hard to separate them from other cells in the organ. But, by focusing on tissue obtained from mouse embryos, the Salk researchers were able for the first time to identify and isolate a sufficiently large number of fetal breast stem cells to begin to understand how their GPS works.

The Salk scientists first made the surprising finding that these fetal breast stem cells were not fully functional until just prior to birth. This observation suggested that a very special landscape is needed for a cell to become a stem cell. The breast stem cells at this late embryonic stage were sufficiently abundant to simplify their isolation. This enabled their genetic signature to be determined, and then compared to that of the stem-like cells in breast cancers.

The signatures of the breast stem cells in the fetus were stunningly similar to the stem-like cells found in aggressive breast cancers, including a significant fraction of a virulent cancer subtype known as “triple-negative.” This is important as this type of breast cancer has until now lacked the molecular targets useful for designing personalized therapeutic strategies.

“The cells that fuel the development of tumors in the adult are unlikely to ‘invent’ entirely new patterns of gene expression,” says Benjamin Spike. “Instead, some cancer cells seem to reactivate and corrupt programs that govern fetal tissue stem cell function, including programs from their neighboring cells that constitute the surrounding fetal stem cell landscape, or microenvironment.”

The discovery of the shared genetic signatures provides a new avenue for scientists to explore the links between development and cancer. By uncovering new biological markers, the scientists hope to develop tests that individualize treatment by showing how the GPS system of a tumor operates. This should help doctors to determine which patients may benefit from treatment, and the correct types of treatment to administer.

Doctors are already using drugs, such as Herceptin, that specifically target malfunctioning genetic pathways in tumors, but no such therapies are currently available for certain aggressive forms of the disease, such as the triple negative subtype.

They found that the fetal breast stem cells are sensitive to a class of targeted therapies that already exists, so these therapies might also work in triple negative breast cancers. Laboratory studies and clinical trials are currently underway to test this possibility.

“Substantial effort is being expended to personalize cancer treatment by gaining a better understanding of the genetics of an individual patient’s cancer,” Wahl says. “Our findings offer a way to discover new targets and new drugs for humans by studying the primitive stem cells in a mouse.”

In addition to Spike, Dannielle Engle and Jennifer Lin, both postdoctoral researchers in Wahl’s laboratory, were also co-first authors on the paper.

The research was sponsored by the Breast Cancer Research Foundation, the U.S. Department of Defense, the G. Harold & Leila Y. Mathers Foundation and Susan G. Komen for the Cure.