LA JOLLA,CA—Scientists studying cancer development have known about micronuclei
for some time. These erratic, small extra nuclei, which contain fragments, or whole
chromosomes that were not incorporated into daughter cells after cell division,
are associated with specific forms of cancer and are predictive of poorer prognosis.

In a new study, published on July 3, 2013 in Cell, a team of scientists at the Salk Institute for Biological Studies finds that disrupted micronuclei,
which can trigger massive DNA damage on chromosomes, might play an even more active
role in carcinogenesis than previously thought. They also found that disrupted micronuclei
can be an objective biomarker for the genetic instability common to many solid tumors,
including non-small cell lung cancer (NSCLC).

“Our study shows that more than 60 percent of micronuclei undergo catastrophic dysfunction
in solid tumors such as NSCLC,” says Martin Hetzer, a professor in Salk’s Molecular and Cell Biology Laboratory and holder of the Jesse
and Caryl Phillips Foundation Chair. “We identified disrupted micronuclei in two
major subtypes of human non-small cell lung cancer, which suggests that they could
be a valuable tool for cancer diagnosis.”

As a result of a glitch in cell division, whole chromosomes can sometimes end up
outside the nucleus. During normal division, a cell duplicates its chromosomes
and sends them to two newly formed daughter cells. One set of chromosomes goes to
each daughter cell, but, for a variety of reasons, the chromosomes sometimes are
not divided evenly, with one cell receiving an extra set and the other cell coming
up short. These lagging chromosomes, which acquire their own nuclear membrane and
are called micronuclei, often don’t make it to the nucleus, ending up elsewhere
within the cell and becoming wrapped in their own nuclear envelope. Micronuclei
appear at a higher frequency in cancer cells. 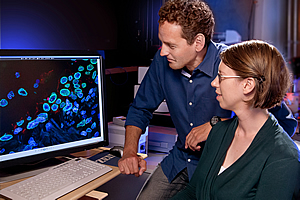 In their study, Hetzer and his team found that during a certain phase of cancer
cell division previously undetected defects in the nuclear lamina, filaments that
provide support and stability to the cell’s nucleus, cause the nuclear envelope
surrounding micronuclei to catastrophically collapse, leading to the loss of basic
nuclear functions such as replication, transcription, and DNA damage recognition
and repair. More than 60 percent of micronuclei undergo this irreversible loss
of function following nuclear envelope collapse, precipitating cancer-causing aneuploidy,
the accumulation of an abnormal number of intact chromosomes within cancer cells.

“In the micronuclei,” says Emily Hatch, a research associate in the Hetzer laboratory, “we saw holes developing in the lamina. We think
the membrane has no support at the site of these holes, so it weakens and ruptures.
We don’t fully understand why this happens in micronuclei.”

Previous studies have found that the DNA damage and arrest of gene transcription
caused by nuclear envelope collapse can promote aneuploidy. This damaged DNA can
then enter the next generation of daughter cells and undergo chromothripsis, a rearrangement
of genomic information in one chromosome, which leads to massive DNA damage and
the formation of tumors.

In the current study, Hatch identified biomarkers to identify disrupted micronuclei,
which may greatly increase pathologists’ ability to recognize these structures in
tumor sections. Currently, few objective markers exist to detect genomic instability
in solid tumors, she says, although several cancers rely on the identification of
aneuploidy.

“Our ability to identify disrupted micronuclei in solid tumors suggests a new way
to evaluate aneuploidy in these tissues,” adds Hetzer, who says that it is not clear
if all or how many cancers are affected by disrupted micronuclei. In addition to
NSCLC, scientists believe that micronuclei disruption may play a role in bone cancer,
melanoma and other forms of lung cancer.

Because they are strongly correlated with mitotic errors, micronuclei are regarded
as an accurate indicator of genomic stability and aneuploidy, two hallmarks which
characterize non-small cell lung cancer. Hetzer’s team found disrupted micronuclei
in pulmonary adenocarcinomas, the most common form of primary lung cancer and roughly
50 percent of all NSCLCs, and squamous cell carcinomas, which make up about 30 percent
of NSCLCs.

The work was supported by the National
Institutes of Health, the American
Cancer Society and the National
Cancer Institute.

The Salk Institute for Biological Studies is one of the world’s preeminent basic
research institutions, where internationally renowned faculty probe fundamental
life science questions in a unique, collaborative, and creative environment. Focused
both on discovery and on mentoring future generations of researchers, Salk scientists
make groundbreaking contributions to our understanding of cancer, aging, Alzheimer’s,
diabetes and infectious diseases by studying neuroscience, genetics, cell and plant
biology, and related disciplines.

Faculty achievements have been recognized with numerous honors, including Nobel
Prizes and memberships in the National Academy of Sciences. Founded in 1960 by polio
vaccine pioneer Jonas Salk, M.D., the Institute is an independent nonprofit organization
and architectural landmark.