Mice lacking a set of receptors in one type of neuron in the brain developed compulsive, anti-social behaviors, Salk scientists found

Mice lacking a set of receptors in one type of neuron in the brain developed compulsive, anti-social behaviors, Salk scientists found

LA JOLLA–The loss of a critical receptor in a special class of inhibitory neurons in the
brain may be responsible for neurodevelopmental disorders including autism and schizophrenia, according to new research by Salk scientists.

The importance of the receptor, called mGluR5, in other areas of the brain had been previously established. Until now, however, no one had studied their specific role in a cell type known as parvalbumin-positive interneurons, thought to be important in general cognition and generating certain types of oscillatory wave patterns in the brain.

“We found that without this receptor in the parvalbumin cells, mice have many serious behavioral deficits,” says Terrence Sejnowski, head of Salk’s Computational Neurobiology Laboratory, which led the research published in Molecular Psychiatry on August 11, 2015. “And a lot of them really mimic closely what we see in schizophrenia.” 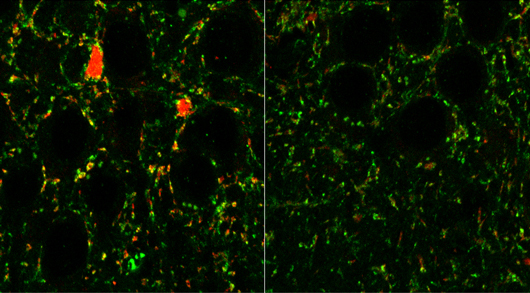 When mice are engineered to lack the mGluR5 receptor in parvalbumin cells (right), they have fewer inhibitory (red) connections controlling the activity of excitatory neurons.

Scientists had previously discovered that when molecular signaling was disrupted in these cells during development, the brain’s networks didn’t form correctly. Separate studies have revealed that mGluR5 receptors, which transmit glutamate signaling in the brain, are linked to addiction disorders, anxiety and Fragile X Syndrome. But, in these cases, mGluR5 is affected in excitatory cells, not inhibitory cells like the parvalbumin-positive interneurons.

The Salk team wondered what the role of mGluR5 was in the parvalbumin cells since the cells were deemed so important in brain development. They partnered with Athina Markou’s team from the Department of Psychiatry at the University of California, San Diego, to examine what happened when the receptor was selectively deleted from these cells after the brain’s initial formation. Without the receptor in these cells, they found, mice had a host of developmental problems, including obsessive, repetitive grooming behavior and anti-social tendencies. Moreover, the patterns of activity in the animals’ brains resembled those seen in humans suffering from schizophrenia.

“This discovery implies that changes after birth, not just before birth, are affecting the way the network is set up,” says Margarita Behrens, corresponding author and Salk staff scientist.

The results suggest that an alteration in mGluR5 receptors in these brain cells may be a critical step in the formation of some neurodevelopmental disorders, adds Sejnowski. It’s good news, he says, because the molecular change is potentially reversible. 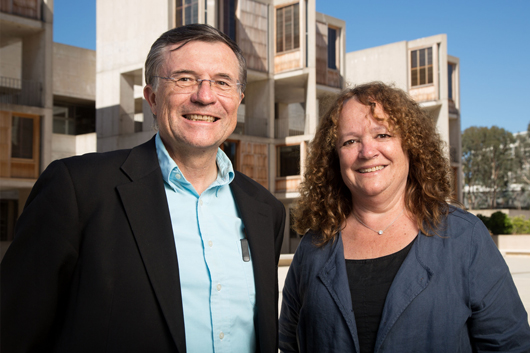 “The cells are still alive, and if we can figure out how to go in and change some of these molecular switches, we might actually be able to put the cells back into healthy, functioning states,” he says.

Behrens says the study also should be a signal of caution to the pharmaceutical industry to be wary of drugs that affect mGluR5 throughout the whole brain. “There are a lot of clinical trials ongoing looking at modulating mGluR5 for anxiety and Fragile X Syndrome,” she says. “But our results suggest that if you affect parvalbumin neurons, you might get behavioral changes you weren’t expecting.”

More research is needed to show whether the parvalbumin cells’ mGluR5 receptors are linked to disease in humans and, if so, what causes the loss or disruption to the receptors.

Other researchers on the study were A. Pinto-Duarte, A. Kappe, A. Zembrzycki, E.A. Mukamel, K. Lucero, and X. Wang of the Salk Institute; and S.A. Barnes and A. Markou of the University of California, San Diego.

The work and the researchers involved were supported by grants from the National Institutes of Health and Howard Hughes Medical Institute, and a Calouste Gulbenkian Foundation Fellowship.