LA JOLLA, CA—A synthetic derivative of the curry spice turmeric, made by scientists at the Salk Institute for Biological Studies, dramatically improves the behavioral and molecular deficits seen in animal models of ischemic stroke and traumatic brain injury (TBI). Two new studies suggest that the novel compound may have clinical promise for these conditions, which currently lack good therapies.

Ischemic stroke is the leading cause of disability and the third leading cause of death of older people in the United States, while TBI is the leading cause of death and disability in both civilians and military personnel under the age of 45; in particular, it is the major cause of disability in veterans returning from Iraq and Afghanistan. In both conditions, those who survive frequently have serious behavioral and memory deficits. The only FDA-approved treatment for stroke is tissue plasminogen activator (TPA), which is effective only in about 20 percent of cases. There is no clinically documented treatment for TBI.

In earlier studies, David R. Schubert, Ph.D., and Pamela Maher, Ph.D., in the Salk Cellular Neurobiology Laboratory had developed a series of new compounds using a novel drug discovery paradigm that starts with natural products derived from plants; it then calls for selecting synthetic derivatives that show efficacy in multiple assays testing protection against various aspects of the nerve cell damage and death that occur in brain injuries and in age-associated neurodegenerative diseases. One compound, called CNB-001, which was derived from curcumin, the active ingredient in the spice turmeric, proved highly neuroprotective in all of the assays; it also enhanced memory in normal animals. 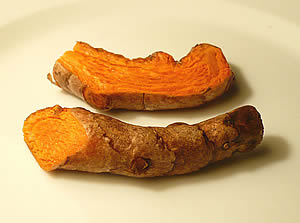 Caption: Derivatives of curcumin, the main active ingredient in the popular Indian spice turmeric, are neuroprotective against stroke and traumatic brain injury.

While the Salk group has a great deal of expertise in age-associated neurological diseases such as Alzheimer’s, they do not run animal models of TBI and stroke. “To test the prediction that drugs from our new drug discovery scheme will work in multiple models of CNS disease and trauma,” Schubert explains, “we undertook a series of experiments to assay the drugs in collaboration with researchers at Cedars-Sinai and UCLA, who are leaders in the fields of stroke and TBI, respectively, and appreciate the potential for therapeutics based on natural products and their derivatives.”

Employing the same animal model of stroke that was used to develop TPA, Paul Lapchak, Ph.D., of the Department of Neurology at the Burns and Allen Research Institute at Cedars-Sinai Medical Center in Los Angeles, collaborated with Schubert’s team in a study that showed that CNB-001 was at least as effective as TPA in preventing the behavioral deficits caused by stroke. The study, published in the Dec. 2, 2010 edition of the Journal of Neurochemistry, also demonstrated that unlike TPA, which reduces clotting in the blood vessels of the brain, the Salk compound has a direct protective effect on nerve cells within the brain. Maher has found that it maintains specific cell signaling pathways required for nerve cell survival.

Similarly, in a study to be published in early 2011 in Neurorehabilitation and Neural Repair, Fernando Gomez-Pinilla, Ph.D., and his colleagues in the Department of Physiological Science and Division of Neurosurgery at the University of California, Los Angeles used a rodent model of TBI to demonstrate that CNB-001 dramatically reversed the behavioral deficits in both locomotion and memory that accompany the brain injury. As with stroke, CNB-001 was again found to maintain the critical signaling pathways required for nerve cell survival, as well as the connections between nerve cells that are lost with the injury.

The results of these two studies, which used two distinct models of brain injury, indicate that the Salk compound has clinical potential in conditions where there is currently no effective treatment.

“Existing drug therapies for complex neurological conditions such as stroke and Alzheimer’s disease target only one aspect of the condition, while in fact many different factors contribute to the pathology,” observes Schubert. “In the drug discovery program our lab uses at Salk, drug candidates must show efficacy in tissue culture models of several aspects of the condition before they are introduced into animal models. We believe that this approach is making an important difference in the discovery of effective drugs.”

In related work, Maher used the same drug discovery paradigm to identify a compound that is effective in animal models of Huntington’s disease. “Although these brain disorders appear very different, they share common changes in the nerve cells, which suggests that compounds that prevent these changes will be effective in multiple disorders,” she notes.

In addition to Schubert and Gomez-Pinilla, Aiguo Wu, Ph.D., and Zhe Ying of the UCLA Department of Physiological Science contributed to the TBI study.

Both studies were supported by the National Institutes of Health; Gomez-Pinilla’s study received additional funding from the Craig Neilsen Foundation.

About the Salk Institute for Biological Studies?
The Salk Institute for Biological Studies is one of the world’s preeminent basic research institutions, where internationally renowned faculty probe fundamental life science questions in a unique, collaborative, and creative environment. Focused both on discovery and on mentoring future generations of researchers, Salk scientists make groundbreaking contributions to our understanding of cancer, aging, Alzheimer’s, diabetes, and infectious diseases by studying neuroscience, genetics, cell and plant biology, and related disciplines.