La Jolla, CA – Early stage breast cancer that has not yet invaded the surrounding tissues may already contain highly motile cells, which brings the tumor one step closer to metastasis, report researchers at the Salk Institute for Biological Studies.

Their study, published in the Dec. 30 issue of the Journal of Cell Biology, suggests that these cells, although not yet invasive, could wander off along milk ducts and seed new tumors within the same breast. “A lack of invasion suggested a lack of motility,” says lead author Gray Pearson, Ph.D, a postdoctoral researcher in the Molecular and Cell Biology Laboratory at the Salk, “but that’s no longer true.”

“This is an exciting finding because it suggests that cell might acquire migratory properties much earlier than appreciated,” says senior author Tony Hunter, Ph.D., a professor in the Molecular and Cell Biology Laboratory. 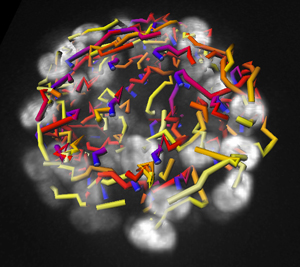 The colored lines track selected cells over a time period of 12 hours in a tissue culture model that recreates the ducts of the mammary gland.

Due to improved screening programs most breast tumors are discovered at an early stage, when they are still small and confined. In such cases, cancer cells have not grown into the surrounding tissues and remain within the borders of a duct, the most common site where invasive breast cancer arises. These tumors are known as DCIS (ductal carcinoma in situ).

The standard treatment for DCIS is lumpectomy, the surgical removal of the tumor and surrounding tissue. Approximately 16% of DCIS patients treated with lumpectomy alone develop recurrent breast cancer growth within 5 years of treatment. One of the questions faced by oncologists and patients is whether they should add gamma radiation after undergoing surgery to catch straying tumor cells and reduce the risk of recurrent breast cancer. Currently, the decision is based solely on the size of the tumor.

“Our findings suggest that if a DCIS contains these highly motile cells the patient may have an increased risk for recurrent growth,” says Pearson. “Under these circumstances you would consider adding radiation treatment regardless of tumor size.”

While the presence of highly motile cells may guide treatment decisions in the future, the researchers have yet to show that wandering cells do indeed influence patient outcome, cautions Pearson.

In their study, the Salk researchers used a tissue culture model that recreates the duct of the mammary gland. They embedded human cells isolated from breast tissue in a three-dimensional matrix that mimics their natural surroundings. These cells spontaneously develop into so called acini, hollow structures resembling tiny milk ducts.

Then they turned on the ERK1/2 MAP kinase pathway, a signaling cascade frequently activated during the development of tumors, and watched in real time as breast cancer cells learned how to walk. “We quickly realized that there was a significant cell movement, which was quite surprising,” recounts Pearson. “Within 24 hours a large number of these spheres had lost their organization and the cells started to dance around.” (see movie)

While dangerously invasive cells can squeeze through the basement membrane and make a run for the surrounding tissue, motile cells still could not escape the confines of the ERK-activated acini. “But the acquisition of motility prior to invasion presumably lowers the barrier for future invasive growth,” explains Pearson.

“The advent of live-cell imaging allows us to watch labeled cells move around in tissues and learn a lot about their behavior, which wouldn’t be revealed in cultured cells,” says Hunter.

In a next step, Pearson hopes to identify molecular markers for breast cancer cell motility that will help oncologists to diagnose patients who are at higher risk of metastasis.