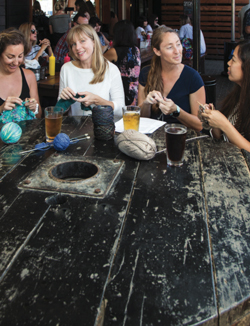 With two chemists for parents, the last thing Abby Buchwalter wanted to be when she grew up was a scientist. But in high school she became driven to uncover the fundamental scientific laws governing life. Now, in the lab, she weaves together clues about the structure of our cells while outside of lab she creates fabrics of her own.

Margot Wohl: Hey there, listeners. I’m Margot Wohl, your host for Salk Talk. I’m a neuroscience graduate student at UCSD, but I do my research at the beautiful Salk Institute. I want to take you inside the Salk to meet the compelling scientists that are tackling questions about the principles of life. Today you’ll meet Abby Buchwalter, a scientist that studies the most fundamental unit of life, the cell. She reveals a fascinating result about a rare disease can cause rapid premature aging. And she’ll talk about her experience grappling with the way evolution was taught or not taught in a religious high school.

Abby Buchwalter: Okay, so I’m Abby Buchwalter, I’m a cell biologist at Salk. Both of my parents were chemists, so I grew up around science. They were materials chemists at IBM, so like building silicon wafers and microchips and stuff for computers. So for a long time growing up, I thought I was going to do anything but science, because I thought I would maybe try being a writer or a chef or a fashion designer. I think mid-way into high school, I started to get really intrigued by science and more biology.

Margot Wohl: Abby’s parents are very religious and much of her education happened in schools run by the local church. Her high school experience was pretty out of the ordinary.

Abby Buchwalter: I actually graduated high school by myself. There was nobody else in my class. Enrollment had been falling a lot. I ended up skipping ninth grade, so I kind of moved into a hole in the high school class. There was nobody that was going to graduate in 2001. It was kind of weird. They kind of ran out of things for me to do and we were taught creationism in our biology classes. I took some biology classes at the local community college and it seemed like information was being treated differently. Like facts, in my opinion, were being treated differently in those two learning contexts. It was a very eye-opening experience. I think that is part of the reason that I always thought that science outreach and advocacy matter, because there can be an element of a cultural distrust of science, I think and I think it’s important to fight that.

Margot Wohl: Abby’s contribution to this fight is a program she started two years ago at the Salk Institute called Side Chats.

Abby Buchwalter: So the basic idea of Side Chats is video chat interactions with a scientist on one end of Skype conversation and a classroom on the other end. Kids will decide to give up their lunch hour and their recess break while the scientist talks to them over Skype. So for the students, I think it’s really good for them to a sense of what scientists are like and to understand that they can look a lot like them. That they can be from a variety of backgrounds, they can be men, they can be women, they can be young, they can be old.

Margot Wohl: The students are definitely not the only beneficiaries of this program, as I can attest. I was a participant.

Abby Buchwalter: One part of our training that is often overlooked is how you share what you do with a broader audience, and that broader audience could just be somebody in a different sub-field whose also a scientist, or it could be a family member.
Margot Wohl: On the subject of communicating science with relatives, I ask about her parent’s opinion on the research she does, which is grounded in the theory of evolution.

Abby Buchwalter: They’ve kind of evolved on, that’s fine choice of word, they’ve kind of changed how they think about science and religion a bit over the years. So they don’t think that me being a biologist and believing in evolution is a difficult thing for them to understand or to embrace. I think it’s important to them to think that there is this overarching plan for how everything came to be. I don’t know, my brain just never really worked that way. For me, I just want to figure out how things work, and it’s not as important to me to think that I understand the origin story of it all.

My parents very much focused on synthetic chemistry and very defined environments, but I was more intrigued in like how the messiness of life is organized. You have all this chaos, but how to do make an organized, functioning organism? And I started to focus on that question at the cellular level, so how does a cell act as a functioning machine that takes an energy, builds new structures, protects it’s genome. It’s the smallest unit of life, and there’s so much complexity inside of that.

And in particular I’m studying the nuclear lamina, which is the structure that acts kind of like a skeleton, or a scaffold for the nucleus. It interacts with DNA and helps to control which parts of our DNA are active and which parts are silent and are not being used. Specifically what I’ve been studying is how the lamina is turned over. It’s not just made and then left there for the lifetime of the cell. It might be a way for the cell to kind of change some of the contacts between the lamina and the DNA. Kind of like a timer built in, I guess, of this structure will only be here for so long, and then I’ll bring in some new pieces and replace it. You might be able to remodel it as you do that.

Margot Wohl: But what happens when that remodeling goes awry because of a change with the nuclear lamina?

Margot Wohl: A mutation leads to Progeria, a disease that is the inspiration for the character played by Robin Williams in Jack and Brad Pitt in Benjamin Button.

Abby Buchwalter: This disease affects only about 400 people in the world. I got cells from patients afflicted with this premature aging disorder. What I saw that most proteins were turning over faster in the age to cells. Before I realized that there was something new to understand there, I was kind of like, “What do I do now? I don’t know what to do with this, this is crazy.” But then once we got a hint of what it might mean, then it shifted into a lot of questions to answer really fast.
What we think is going on is that there’s a change to the organization of the nucleus, a change to how the genome is being read and used and parts of it are too active, and it turns out it’s the parts that make ribosomes.

Margot Wohl: Ribosomes are the protein making machines of our cells, and they use the energy source ATP as fuel.

Abby Buchwalter: It just uses up so much energy in the cell, they then go on to make a lot more protein a lot faster, which uses up even more energy and we think that kind of accelerates the aging process by sucking up all the available ATP in the cell. Their whole clock is just set faster. There is a possibility that we could come up with a new way to treat the disease. Because we see the ribosomes are being made so much faster in this disease, an obvious target would be to try to slow that down and limit that. It’s also possible that we can learn something about the normal aging process which affects all of us.

There’s one thing that I have kind of a love/hate relationship with about science. It’s that it’s so unpredictable. So that can be really invigorating and exhilarating sometimes, but there can also be times where you think you have a great idea and it just won’t lead anywhere. You just can’t predict that, you can’t control it, but that’s also the thing that keeps me coming back, too.
Margot Wohl: Science works in unpredictable ways and so does love.

Abby Buchwalter: So we were neighbors at neighbors [inaudible 00:07:48].
Margot Wohl: That’s right, love might find you in the laboratory, with chance glances passed between test tubes and cell cultures. Furtive glances underneath your safety goggles.

Abby Buchwalter: Started out as running buddies and then over time, we became more than running buddies. And we got married earlier this year, actually.

Margot Wohl: As we near the end of the interview, Abby makes a plug for her latest creative endeavor.

Abby Buchwalter: So my sisters and I have an Etsy called Stuff My Sister Made, but it is about 90% one sister, who’s been very prolific with ceramics in the past couple months and my knitting has been very slow.

Margot Wohl: Thanks for listening to this episode of Salk Talk. To learn more about Salk, visit us at www.salk.edu.