LA JOLLA, CA—Bony fish like the tiny zebrafish have a remarkable ability that mammals can only dream of: if you lop off a chunk of their heart they swim sluggishly for a few days but within a month appear perfectly normal. How they accomplish this—or, more importantly, why we can’t—is one of the significant questions in regenerative medicine today. 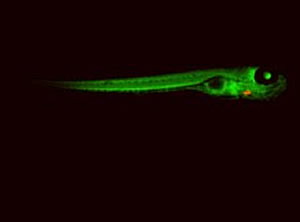 Izpisúa Belmonte and his team used zebrafish whose hearts glow red to identify the cells that allow injured zebrafish hearts to repair themselves.

In a paper published in the March 25, 2010 issue of Nature, researchers working at the Salk Institute for Biological Studies and the Center of Regenerative Medicine in Barcelona (CMRB) identified a fish heart cell population that is the source of this astonishing healing feat, a finding that could provide insight into how mammalian hearts might be coaxed into repairing themselves after injury brought on by heart attack.

Juan Carlos Izpisúa Belmonte, Ph.D., professor in the Gene Expression Laboratory, and colleagues report that it is not stem cells—those “usual” regeneration suspects—that patch up an injured fish heart. Instead, repair is accomplished by differentiated cardiac muscle cells known as cardiomyocytes, those cellular grown-ups whose normal job is to supply the contractile force of the heart.

“What the results of our study show is that mother nature utilizes other ways besides going all the way back to pluripotent stem cells to regenerate tissues and organs,” says Izpisúa Belmonte, noting that at least in fish, the body may have evolved surprising repair strategies driven by cell types more seasoned than stem cells.

To identify which cells actually filled in excised zebrafish heart muscle, Izpisúa Belmonte’s team first employed some genetic engineering to only make cardiomyocytes “transgenic” by inserting into them a tracer gene that made them glow green under a microscope. 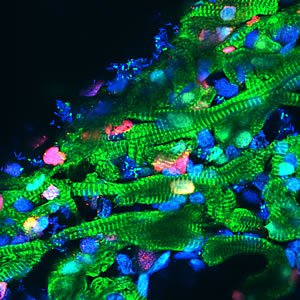 Heart muscle cells (shown in green), regress to a more youthful state after injury, start dividing again (indicated by a red marker) to replenish lost cells and then mature a second time into cardiomyocytes.

They then literally chopped off about 20% of each fish ventricle and waited a couple of weeks for the hearts to regenerate: if regenerated heart muscle didn’t glow, it would mean that cells other than cardiomyocytes, such as a cardiac stem cell population, had replaced the damaged muscle.

Human hearts cannot undergo these types of regenerative changes on their own. When damaged by heart attack, our heart muscle is replaced by scar tissue incapable of contracting. However, prior to heart failure, damaged mammalian heart muscle cells enter a save-yourself state known as “hibernation,” in which they cease contracting in an effort to survive.

Chris Jopling, Ph.D., a postdoctoral fellow of Izpisúa Belmonte’s at CMRB and first author of the study, sees human heart “hibernation” as significant. “During heart regeneration in the zebrafish we found that cardiomyocytes displayed structural changes similar to those observed in hibernating cardiomyocytes,” he said, noting that those changes were actually necessary before the fish cardiomyoctes could start dividing. “Because of these similarities, we hypothesize that hibernating mammalian cardiomyocytes may represent cells that are attempting to proliferate.”

So the good news is that mammalian hearts can undergo a kind of metabolic “downsizing” that is a prelude to cell division. “This idea fits nicely with the findings from a number of groups — that forced expression of cell cycle regulators can induce cardiomyocyte proliferation in mammals,” says Jopling. “Maybe all they need is a bit of a push in the right direction.”

A search is on for factors that could supply that “push.” Although he is optimistic about the outcome, Izpisúa Belmonte also feels that the study should caution researchers not to overlook potential contributions that mature cells might make to regeneration. “We can no longer view differentiated cells as being a static endpoint of the differentiation process,” says Izpisúa Belmonte, who also directs the CMRB. “If we could mimic in mammalian cells what happens in zebrafish, perhaps we could be in a position to understand why regeneration does not occur in humans.”
Also contributing to this work were Merce Marti, Ph.D., Angel Raya, M.D., Ph.D., Edward Sleep, and Marina Raya, all of the CMRB in Spain.

The study was funded in part by Fundacion Cellex, the Ipsen Foundation, the G. Harold and Leila Y. Mathers Charitable Foundation, the National Institutes of Health, and Sanofi-Aventis.