LA JOLLA–You’ve misplaced your cell phone. You start by scanning where you remember leaving it: on your bureau. You check and double-check the bureau before expanding your search around and below the bureau. Eventually, you switch from this local area to a more global one, widening your search to the rest of your room and beyond.

When it comes to animals and food, a similar strategy is used to search for food (“foraging”). Now, Salk scientists have developed a mathematical theory–based on roundworm foraging–that predicts how animals decide to switch from localized to very broad searching. This new theory could begin to explain animal behavior in a more unified way, laying the groundwork for general rules of behavior that could help us understand complex or erratic attention-related behaviors, such as attention deficit hyperactivity disorder (ADHD), and even let us predict how extraterrestrials might behave. 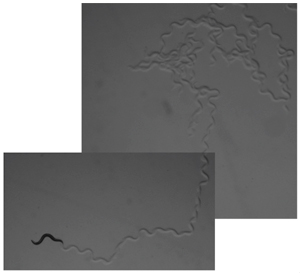 “How do you decide which route to take home or which problem to work on? This theory is exploring what ultimately makes us human–how we make decisions based on partial information affects all aspects of our lives,” says Tatyana Sharpee, associate professor of Salk’s Computational Neurobiology Laboratory and senior author of the paper, which was published in eLife on December 9, 2014.

Worms and other animals often follow a chemical trail (a scent, for example) to find their food. But when no chemicals are present they switch to an “infotaxis” search where information gathering happens in more discrete local and global stages.

“What is surprising is that these simple organisms with a very small nervous system perform–or approximate–fairly complex, multistep, long-term planning strategies,” says Sharpee.

This type of search is like looking for a friend at a crowded beach, says Sreekanth Chalasani, assistant professor of Molecular Neurobiology Laboratory, holder of Salk’s Helen McLoraine Developmental Chair in Neurobiology and co-senior author of the work. If you think the friend is under a blue umbrella, you won’t necessarily charge to the first blue umbrella you see. You’ll probably first conduct a more global survey of the scene, glancing at all the umbrellas and ruling out areas where blue does not appear. If you still can’t find your friend, you would expand your search to include other locations in addition to under blue umbrellas. Even though you waste some time, you still obtain a lot of information about where this person is likely to be by focusing on things not directly related to your target. 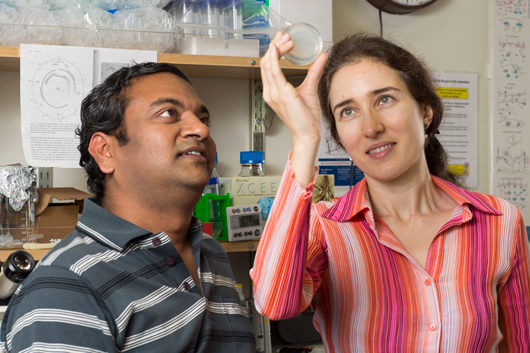 “Seeking information about a target is often better than seeking the target itself,” says Chalasani. “And what this paper confirms in a theoretical model is that you don’t need lots of neurons to perform these searches that include switching from a local to a global search–you can approximate it by using just three neurons, as in the roundworm C. elegans.”

Successfully seeking food is critical to an animal’s survival. Previously, C. elegans worms have been shown to conduct an intense search of an area where they believe food to be located. After 15 minutes or so, they turn less and explore a more extended area. Since the worms didn’t have a chemical gradient to follow, the team wanted to explore the underlying strategy of the worms’ behavior. Using data from Chalasani’s experimental studies, Sharpee’s lab developed virtual simulations of the worms to model their behavior.

Though this information-maximizing theory has been tested in a few types of behavior, Sharpee and others believe it could provide a basis for a larger, unified framework for understanding different types of behavior across species, cells, neurons and even larger scale phenomenon, such as resource allocation.

Next, the researchers plan to see whether the roundworm can–and to what extent–maintain a mental map of its food search and explore the energy costs and benefits of information searching.

Authors of the paper include Adam Calhoun of the University of California, San Diego, in addition to Sharpee and Chalasani.