LA JOLLA, CA—Stem cells in the brain remain dormant until called upon to divide and make more neurons. However, little has been known about the molecular guards that keep them quiet. Now scientists from the Salk Institute for Biological Studies have identified the signal that prevents stem cells from proliferating, protecting the brain against too much cell division and ensuring a pool of neural stem cells that lasts a lifetime.

The research, which will be published in the July 1 issue of Cell Stem Cell, highlights the importance of bone morphogenetic factor protein (BMP) signaling for the maintenance of a neural stem cell reservoir throughout adult life and may provide the key to understanding the interplay between exercise, aging and neurogenesis.

Adult neural stem cells in the hippocampus-a memory hub of the brain-sprout new brain cells throughout life. This particular area of the brain, one of only two for which neurogenesis has been clearly shown, is particularly vulnerable to age-related degeneration. Regular physical exercise not only slows the shrinking of aging hippocampi but also improves learning and memory in mature adults.

“This study provided us with very important insights into how adult stem cells are regulated, says senior author Fred H. Gage, Ph.D., a professor in the Laboratory for Genetics at the Salk Institute and the Vi and John Adler Chair for Research on Age-Related Neurodegenerative Diseases. “Going forward, we can start to tinker with this mechanism to understand how exercise influences the aging brain.” 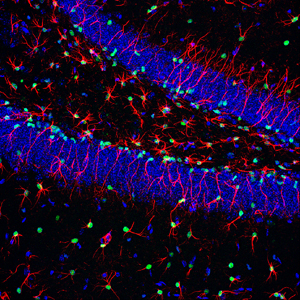 During the process of neurogenesis, neurons-to-be pass through several distinct stages, including cell birth, fate determination, survival, integration, and acquisition of functional properties.

“Each stage is driven by a complex interplay between intrinsic mechanisms and environmental cues,” says co-first author Helena Mira, formerly a post-doc in the Gage laboratory and now an assistant professor in the Department of Cell Biology and Development at the Carlos III Health Institute in Madrid. “We already knew a lot about fate choice and differentiation, but it was unclear how neural stem cells decided to divide or not in the first place.”

Using their observation that quiescent neural stem cells express the BMP receptor 1A as a starting point, Mira and her collaborators investigated the role of BMP signaling in regulating the proliferation of stem cells located in the hippocampus, one of two brain regions harboring neural stem cells.

They found that BMP signaling, which is triggered by the interaction of BMPs with their receptors, is inactive in most proliferating cells, whereas it is active in non-dividing cells, including quiescent stem cells and differentiated neurons. Unlike stem cells, mature neurons express BMP receptor 1B, which will be the focus of future studies.

Experiments with cultured neural stem cells confirmed that it was indeed BMP that kept them quiet. BMP’s anti-proliferative effect was blocked when BMP was replaced with a protein known as Noggin, which binds and inactivates members of the BMP family.

The researchers observed the same effect when they delivered Noggin directly into the brains of adult mice. Here, too, Noggin successfully interfered with BMP signaling and raised quiescent stem cells out of their slumber. After one week, those neural stem cells had started dividing and their offspring were well on their way to becoming neurons.

When neural stem cells were forced to proliferate over prolonged periods of time, however, the pool of active neural stem cells was depleted, suggesting to Gage and his team that quiescence functions as a protective mechanism that counteracts stem cell exhaustion and bursts of dividing cells, which could lead to tumors.

“It tells you how finely this process is regulated,” says Mira. “BMP ensures a sufficiently big population of quiescent stem cells that can feed into the system when called upon.”

BMP may also be the linchpin that links exercise, aging and neurogenesis. “As we age, the number of new neurons declines but physical exercise brings that number back up,” says Gage. “Our findings raise the possibility that the BMP signal becomes dominant over time, forcing neural stem cells deeper into quiescence and thus making it harder to generate new brain cells.”

The work was in part funded by the Deutsche Forschungsgemeinschaft, the Programa Ramon y Cajal from the Spanish Ministerio de Educacion y Ciencia, the Centro de Investigación Príncipe Felipe, and the Helmholtz Association.