LA JOLLA–William R. Brody will retire from the Salk Institute on December 31, 2015, having led the Institute through a successful fundraising campaign and launching a number of initiatives to ensure that Salk researchers continue to push the boundaries of science and medicine.

Brody has led the Institute for six years, a tenure that includes overseeing the $300 million Campaign for Salk, the Institute’s first major fundraising effort. The campaign surpassed its goal earlier this year. 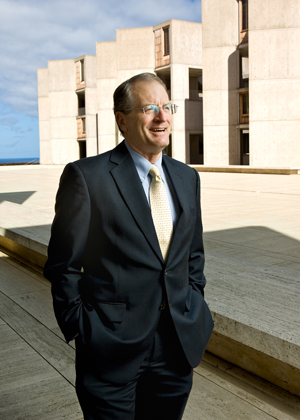 In retirement, Brody will continue to provide guidance to the Institute as a professor emeritus, and will pursue personal interests, including music and aviation, as well as continue his service on corporate and nonprofit boards.

“My tenure at the Salk has been a tremendously rewarding experience, and it has been an honor to be part of such a storied and important place,” Brody says. “With our successful fundraising campaign finishing this year, it will be a good time for the Institute to recruit its next leader.”

Irwin M. Jacobs, chairman of Salk’s Board of Trustees, is leading a committee of trustees, faculty and nonresident fellows to spearhead the search for the Institute’s new president. A national recruiting firm has been retained to support the search.

“While I am saddened by Bill’s decision to leave Salk, he will be leaving the Institute in a very strong position to attract an exceptional leader to continue our trajectory of making groundbreaking discoveries that lead to critical cures,” says Jacobs.

Brody joined the Salk in 2009 shortly after retiring from his 12-year presidency at Johns Hopkins University in Baltimore. He had planned to take time off to write, but was irresistibly attracted by the unique opportunity to lead Salk’s cadre of talented researchers, including Nobel laureates and members of the National Academy of Sciences, during a revolutionary period in biology and medicine.

Jacobs notes that Brody has played a key role in attracting and retaining outstanding faculty, expanding the Institute’s board and introducing new disciplines and technologies that advance Salk’s mission. He adds that Brody strengthened relationships with other scientific institutions in San Diego and throughout the world while keeping Salk competitive as federal funding dwindled and international research centers vied for top talent.

Ensuring that Salk remains on sound financial footing was a major goal during Brody’s tenure. As part of the Campaign for Salk, the Institute’s endowment has more than doubled, from $133 million in 2009 to $356 million in 2015. Endowment funding is critical to providing long-term stability and flexibility to adapt rapidly as science evolves.

That financial success has allowed Salk to recruit a number of highly sought-after new faculty members who have infused the Institute with fresh ideas. This new generation of scientists is trained not just in biology, but physics, computer science and chemistry, a refection of the increasingly technologically driven and interdisciplinary nature of biological research.

Brody also greatly increased the Institute’s outreach efforts to raise Salk’s profile and attract private philanthropy support. This included a number of new public events, including the Salk Science and Music Series, Brody’s brainchild and an offshoot of his classical piano training.

“Bill introduced cultural programs that partly achieved Jonas Salk’s intent for the Institute to unite science and the arts, while also attracting many new supporters to Salk,” says Jacobs. “”He has contributed greatly to the Salk legacy, setting the stage for continued excellence as we move to new leadership.”