La Jolla, CA—Best known for its effects on fruit ripening and flower fading, the gaseous plant hormone ethylene shortens the shelf life of many fruits and plants by putting their physiology on fast-forward. In recent years, scientists learned a lot about the different components that transmit ethylene signals inside cells. But a central regulator of ethylene responses, a protein known as EIN2, resisted all their efforts.

Finally, after more than a decade of constant probing, a team of researchers led by Joseph Ecker, Ph.D., a professor in the Plant Biology laboratory and director of the Salk Institute Genomic Analysis Laboratory, successfully pinned down the elusive protein. Turns out, the presence of ethylene stabilizes the otherwise ephemeral EIN2 allowing it to gather up enough strength to pass on ethylene’s message. 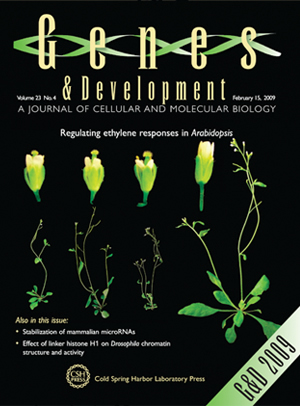 Left: Plants with reduced levels of ETP1 and ETP2 are smaller than their normal counterparts (last plant on the right side) and have abnormal flowers with the pistil protruding from unopened floral buds.

Image: Courtesy of Genes and Development

Their findings, published in the Feb. 15, 2009 edition of the journal Genes and Development, are an important step toward defining EIN2’s role in growth and development and modifying key processes to improve agriculture, preventing crop losses due to ethylene related processes.

“Ethylene is involved in a wide variety of processes and we knew from genetic experiments that EIN2 is right at the center of ethylene signaling pathway, but for the longest time we were unable to figure out how it is regulated,” says Ecker. “Now that we know that EIN2 is negatively regulated by protein degradation, we can begin to understand how it triggers all these different ethylene responses in plants.”

All aspects of a plant’s life are influenced by ethylene: It induces seed germination and the so-called triple response in seedlings, which helps them to push past obstructions. It regulates root hair growth in general and nodulation in nitrogen-fixing legumes. It stimulates fruit ripening, floral fading and abscission, which allows plants to drop fruits, leaves and flowers. But it also protects against pathogens and environmental stress.

While ethylene’s power has been harnessed since the ancient Egyptians discovered that scoring figs hastens the ripening process, it also causes significant losses for florists, markets, suppliers and growers. A single rotting apple’s ethylene production will accelerate the ripening process in nearby apples causing them to spoil as well. Stress during shipping and handling increases ethylene production in cut flowers inducing premature floral fading.

“Ethylene plays a big role in our daily life and ethylene overproduction causes huge economic losses every year,” says first author Hong Qiao, Ph.D., a postdoctoral fellow in Ecker’s lab. “Once we fill in the gaps in our understanding of the ethylene signaling pathway, we can use this knowledge to improve pathogen or drought resistance in plants.”

In the absence of ethylene, a protein called CTR1—short for constitutive triple response 1—shuts down the ethylene pathway through the repression of a protein known as ETHYLENE INSENSITIVE 2 or EIN2. As soon as ethylene binds to its receptors, though, CTR1 looses its paralyzing grip on EIN2 and EIN2 becomes active. But nobody knew how.

Since the activity of the gene, which was isolated in Ecker’s lab in 1995, doesn’t change, Qiao took a closer look at protein levels. It quickly became clear that EIN2 is a short-lived protein that is constantly recycled. When she treated the plants with ethylene, however, EIN2 was no longer degraded and started to accumulate.

Further experiments revealed that two so-called F-box proteins, ETP1 and ETP2 (EIN2 targeting protein 1 and 2), flag EIN2 for degradation when it is not needed for signal transmission. In the presence of ethylene, both F-box proteins are inactivated and EIN2 is no longer sent to the cell’s recycling plant.

“Protein degradation is an emerging theme in plant biology and has been linked to several signaling pathways,” explains Ecker. “This type of regulation is like having your foot on the accelerator and the brake at the same time, then letting up on the brake. It allows cells to respond quickly to incoming information.”

When Qiao inactivated both ETP1 and ETP2 the ethylene signaling pathway was permanently active. When she increased their levels above normal the plants did not respond to the presence of ethylene at all because they couldn’t shake off ETP1 and ETP2. “It really confirmed the central role of EIN2,” say Qiao. “Now we can follow this route and fill in the gaps between EIN2 and downstream components of the pathway.”

The work was funded by the National Science Foundation.