When less is more: how mitochondrial signals extend lifespan

When less is more: how mitochondrial signals extend lifespan

LA JOLLA, CA—In making your pro-longevity resolutions, like drinking more red wine and maintaining a vibrant social network, here’s one you likely forgot: dialing down your mitochondria. It turns out that slowing the engines of these tiny cellular factories could extend your life-an observation relevant not only to aging research but to our understanding of how cells communicate with each another.

So report researchers at the Salk Institute for Biological Studies in the Jan. 7, 2011, issue of Cell. Howard Hughes Medical Institute investigator Andrew Dillin, Ph.D., and his colleagues used the roundworm Ceanorhabditis elegans to show that perturbing mitochondrial function in subsets of worm cells sent global signals governing longevity of the entire organism.

“In this study we show how signals sent from distressed mitochondria are communicated to distant tissues to promote survival and enhance longevity,” says Dillin, an associate professor in the Molecular and Cell Biology Laboratory. 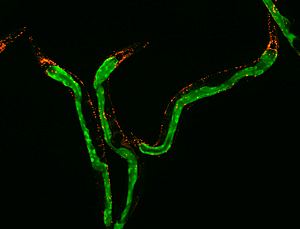 The identity of the signal sent from mitochondrially-distressed cells-a hypothetical factor Dillin calls a “mitokine” -remains unknown. Nonetheless, he speculates that mitokines could one day be lobbed as messengers from healthy to unhealthy tissues to treat degenerative conditions.

“Imagine if we could perturb mitochondria in the liver, and make them send a mitokine to degenerating neurons,” he says. “Instead of trying to get a drug into the brain, we could exploit the body’s ability to send out a natural rescue signal.”

It may seem paradoxical that reducing mitochondrial activity increases longevity because mitochondria, particles classically described as energy-producing “powerhouses”, seem like good guys. How could keeping powerhouses humming along briskly be anything but a plus?

But it turns out that many investigators, Dillin included, have observed puzzling relationships between mitochondria, energy generation and longevity-interactions that suggest that living long does not necessarily require prospering at the subcellular level.

“As a postdoctoral fellow I did a screen looking for worm genes that increased longevity,” says Dillin citing a 2002 Science study that inspired the current work. “Many genes were related to mitochondrial function. If you disabled them, worms lived longer, although their respiration or metabolism was reduced. We wondered whether this is why animals lived longer.”

The current Cell study shows it’s not that simple. Dillin and graduate students Jenni Durieux, Ph.D., first author, and Suzanne Wolff, Ph.D., engineered “transgenic” worms in which a gene named cco-1 was disabled. cco-1 encodes a protein essential for biochemical reactions known collectively as the Electron Transport Chain (ETC), which are required for mitochondria to generate energy-and thus, for cells to live.

A key finding was that worms with ETC selectively impaired by cco-1 loss in either intestine or nerve cells lived longer than normal worms, while worms with ETC perturbed in muscle, skin or the germline did not, suggesting that a unique signal emanating from damaged mitochondria in nerve or gut, and communicated at a distance, extended lifespan.

“Curiously, ETC manipulation had to occur within a critical time window in a worm’s lifespan to get the maximal effect,” says Dillin, noting that effects were long-lasting. “It was like you could manipulate mitochondria in a 30-year-old human and get an extra 15 years, while in an 80-year-old, you might only gain two or three years.”

To determine how cells respond to the pro-longevity cue, the group monitored a cellular emergency plan called the Unfolded Protein Response (UPR). Cells mount it when proteins accumulate excessively and begin to unravel-or “misfold”-which is toxic to cells. To avert cell death, the UPR mobilizes a team of helpers who, like sales clerks at a Gap sweater table, refold accumulating misfolded proteins piling up inside a cell.

When Dillin and colleagues fed worms reagents blocking the UPR, they found that disruption of cco-1 in neurons or intestine no longer had a lifespan-enhancing effect. This dramatic finding illustrates that initiating refolding of proteins, in this case in response to faraway mitochondrial stress, is in fact the very activity that enhances longevity.

Before 2000, biology textbooks defined mitochondria solely in terms of energy production. “We were caught up in mitochondrial metabolic function,” says Dillin, remarking that pro-longevity signals characterized in the current study aren’t strictly metabolic. “But we now recognize numerous other critical activities performed by mitochondria.”

For example, a “metabolic” explanation for enhanced longevity, known as the “rate of living” theory, goes like this: revved up mitochondria burn cells’ energy candle at both ends, leading to (your) premature demise. Conversely, cells that parsimoniously spend energy-possibly due to compromised mitochondrial output-live longer.

Dillin’s study refutes this scenario. “We show that it all comes down to protein folding,” says Dillin. “That’s become the unifying theme in my lab.”

This study was funded by grants from the Glenn Foundation for Medical Research, the NIH and by the Howard Hughes Medical Institute.