La Jolla, CA – The human immunodeficiency virus (HIV) only brings along a minimalist’s survival gear and relies on its host cell to provide what’s missing. Now, a new study provides novel insight into how the virus exploits cellular functions to take up house in infected cells.

The research, a collaborative effort between the laboratories of Sumit K. Chanda, Ph.D, previously at the Genomics Institute of the Novartis Research Foundation (GNF) and now at Burnham and John Young, Ph.D. at Salk, combined several layers of genome-wide analysis and identified 295 host cell factors proteins that aid the virus in establishing an infection. 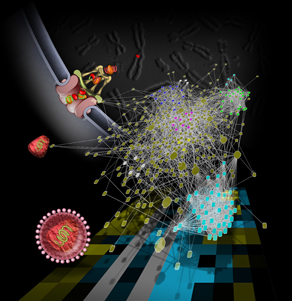 The human immunodeficiency virus (HIV) only brings along a minimalist’s survival gear — just nine genes, coding for 15 proteins — and relies on its host cell to provide what’s missing.

Their study, published in the Oct. 3 issue of Cell, could lead to the development of a new class of HIV therapeutics aimed at disrupting the human-HIV interactions that lead to viral infection.

“HIV has just nine genes, coding for 15 proteins, compared to bacteria, which harbor several thousand genes, or humans, with over 20,000 genes,” said Chanda, associate professor in the Infectious & Inflammatory Disease Center at Burnham and an adjunct faculty member at Salk. “We have known for a long time that HIV hijacks our cellular proteins to complete its life cycle. This study now lays out its flight plan.”

Young, professor in the Infectious Disease Laboratory at Salk added, “Due to viral resistance, there is an urgent need for new classes of therapies aimed at preventing the virus from infecting new cells as opposed to merely keeping viral replication in check. To develop more effective therapies for HIV infection and AIDS we must identify and characterize the cellular factors that participate in early steps of HIV-1 replication and prevent the virus from becoming established.”

Although more than two dozen drugs are available for the treatment of HIV infection, there is a growing need for new antiviral therapies. Recent studies indicate that HIV remains “hidden” in a latent form, even after long-term suppression with highly active antiretroviral therapy.

In the study, the team of researchers used short-interfering RNA (siRNA) which, when introduced into a cell, silences cellular gene expression, one gene at a time. Using high throughput transfection technology available at GNF and at Burnham, more than 144,000 siRNAs (6 siRNAs for each gene in the human genome) were screened for their effects on HIV-1 infection. Data from the siRNA genomic screen was combined with information from large-scale, protein-protein interaction databases to identify key protein complexes that affect discrete steps in the early stages of HIV infection.

“The integration of these systems-based analyses allowed us to build, for the first time, a functionally validated map of host-pathogen interactions that are required for viral infection,” said Renate König, Ph.D., of Burnham, the first-author on the study.

Other coauthors on the study included Drs. Daniel Elleder of the Salk Institute for Biological Studies, Yingyao Zhou of the Genomics Institute of the Novartis Research Foundation, Tracy Diamond and Frederic Bushman of University of Pennsylvania, and Trey Ideker of the University of California, San Diego.

The study was supported by a grant from the U.S. National Institutes of Health and the University of Pennsylvania Center for AIDS research.

About the Salk Institute

About Burnham Institute for Medical Research

Burnham Institute for Medical Research is dedicated to revealing the fundamental molecular causes of disease and devising the innovative therapies of tomorrow. Burnham is one of the fastest growing research institutes in the country with operations in California and Florida. The Institute ranks among the top four institutions nationally for NIH grant funding and among the top 25 organizations worldwide for its research impact. Burnham utilizes a unique, collaborative approach to medical research and has established major research programs in cancer, neurodegeneration, diabetes, infectious and inflammatory and childhood diseases. The Institute is known for its world-class capabilities in stem cell research and drug discovery technologies. Burnham is a nonprofit, public benefit corporation. For more information, please visit www.burnham.org.