LA JOLLA, CA—Although the human genome sequence faithfully lists (almost) every single DNA base of the roughly 3 billion bases that make up a human genome, it doesn’t tell biologists much about how its function is regulated. Now, researchers at the Salk Institute provide the first detailed map of the human epigenome, the layer of genetic control beyond the regulation inherent in the sequence of the genes themselves.

“In the past we’ve been limited to viewing small snippets of the epigenome,” says senior author Joseph Ecker, Ph.D., professor and director of the Genomic Analysis Laboratory at the Salk Institute and a member of the San Diego Epigenome Center. “Being able to study the epigenome in its entirety will lead to a better understanding of how genome function is regulated in health and disease but also how gene expression is influenced by diet and the environment.”

Their study, published in the Oct. 14, 2009 advance online edition of the journal Nature, compared the epigenomes of human embryonic stem cells and differentiated connective cells from the lung called fibroblasts, revealing a highly dynamic, yet tightly controlled, landscape of chemical signposts known as methyl-groups. The head-to-head comparison brought to light a novel DNA methylation pattern unique to stem cells, which may explain how stem cells establish and maintain their pluripotent state, the researchers say.

The emergence of epigenetics has already changed the way researchers think about how disease arises and how physicians treat it. Epigenetic changes play a crucial role in the development of cancer and some drugs that directly interact with the epigenome have been approved for the treatment of lymphoma and lung cancer and are now tested against a number of other cancer types. “Unless we know how these drugs affect the entire epigenome, we don’t really understand their full mechanism of action,” says Ecker. 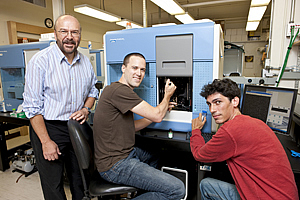 Joseph Ecker, Ryan Lister and Mattia Pelizzola in the lab at the Salk Institute.

Recognizing the central role of the epigenome in many areas of biology and medicine the National Institutes of Health launched a five-year Roadmap Epigenomics Program in 2008. The San Diego Epigenome Center, headed by Bing Ren, Ph.D., Professor of Cellular and Molecular Medicine at the University of California, San Diego School of Medicine and head of the Laboratory of Gene Regulation at the Ludwig Institute for Cancer Research, is an integral part of the five-year, $190 million push to accelerate research into modifications that alter genetic behavior across the human genome.

The current study, to which Ren and additional members of the Center located at the University of Wisconsin and the Morgridge Institute for Research in Madison, Wisconsin, also contributed, is not only the first complete high-resolution map of an epigenome superimposed on the human genome, but also the first study to be published as a direct result of the Roadmap Epigenomics Program.

“This paper exemplifies the goals of the NIH Roadmap for Medical Research’s Epigenomics Program,” said Linda Birnbaum, Ph.D., director of the National Institute of Environmental Health Sciences, one of the NIH institutes funding this program. “The science has matured to a point that we can now map the epigenome of a cell. This paper documents the first complete mapping of the methylome, a subset of the entire epigenome, of 2 types of human cells – an embryonic stem cell and a human fibroblast line. This will help us better understand how a diseased cell differs from a normal cell, which will enhance our understanding of the pathways of various diseases.”

Epigenetic signals can tinker with genetic information in at least two ways: One targets histones, the “spools” around which DNA winds and which control access to DNA. The other is DNA methylation, a chemical modification of one letter, C (cytosine), of the four letters (A, G, C, and T) that comprise our DNA. In the last couple of years, Ecker’s laboratory started to zoom in on genomic methylation patterns, which are essential for normal development and are associated with a number of key cellular processes, including carcinogenesis.

Perfecting the technique in Arabidopsis thaliana, a plant whose genome is 25 times smaller than the human genome, Ryan Lister, Ph.D., a postdoctoral researcher in Ecker’s lab and co-first author on the current study, developed an ultra high-throughput methodology to precisely determine whether each C in the genome is methylated or not, and layer the resulting epigenomic map upon the exact genome it regulates.

Just as expected, in fibroblast cells the majority of Cs followed by a G carried a methyl-group, a pattern often referred to as CG-methylation. But much to the Salk researchers’ surprise, in embryonic stem cells about a quarter of all methylation events occurred in a different context.

“Non-CG methylation is not completely unheard of — people have seen it in dribs and drabs, even in stem cells. But nobody expected that it would be so extensive,” says postdoctoral researcher and co-first author Mattia Pelizzola, who along with Lister undertook the extensive task of extracting and analyzing the epigenome data from these vast sequence datasets. “The whole field had been focused on CG methylation, and non-CG methylation was often considered a technical artifact.”

To confirm their finding, the authors then targeted several regions in a second hESC line, as well as in fibroblast cells that had been reprogrammed into so called induced pluripotent stem (iPS) cells. “They both had the same high level of non-CG methylation, which was lost when we forced them to differentiate,” says Pelizzola.

Being able to create high resolutions maps of the human epigenome, Ecker’s group will now begin to examine how it changes during normal development as well as examining a variety of disease states. “For the first time, we will be able to see the fine details of how DNA methylation changes in stem cells and other cells as they grow and develop into new cell types,” he says. “We believe this knowledge will be extremely valuable for understanding diseases such as cancer and possibly even mental disorders. Right now we just don’t know how the epigenome changes during the aging process or how the epigenome is impacted by our environment or diet.”

This work was supported in part by grants from the Mary K. Chapman Foundation, the NIH, the California Institute for Regenerative Medicine, the Australian Research Council Centre of Excellence Program and the Morgridge Institute for Research.

Researchers who also contributed to the work include Robert H. Dowen and Joseph R. Nery in the Genomic Analysis Laboratory, Gary Hon, Leonard Lee, Zhen Ye, Que-Minh Ngo and Lee Edsall at the Ludwig Institute for Cancer Research at the University of California San Diego, Julian Tonti-Filippini and A. Harvey Millar at the ARC Center of Excellence in Plant Energy Biology in Crawley, Australia, Jessica Antosiewicz-Bourget, Ron Stewart, Victor Ruotti and James A. Thomson at the Morgridge Institute for Research and at the Genome Center of Wisconsin, both at the University of Wisconsin in Madison.