Visual attention: how the brain makes the most of the visible world

Home - Salk News - Visual attention: how the brain makes the most of the visible world

Visual attention: how the brain makes the most of the visible world

La Jolla, CA—The visual system has limited capacity and cannot process everything that falls onto the retina. Instead, the brain relies on attention to bring salient details into focus and filter out background clutter. Two recent studies by researchers at the Salk Institute for Biological Studies, one study employing computational modeling techniques and the other experimental techniques, have helped to unravel the mechanisms underlying attention.

“In everyday viewing a visual detail that is the target of our attention is generally surrounded by a lot of stimuli that are momentarily irrelevant to behavior,” says John H. Reynolds, Ph.D., an associate professor in the Systems Neurobiology Laboratory at the Salk Institute, who led the study published in the March 26, 2009 issue of the journal Neuron. “Attention dynamically routes relevant information to decision-making areas in the brain and suppresses the surrounding clutter.”

But just how the brain achieves this feat has been the topic of much debate. In an earlier issue of Neuron Reynolds and David J. Heeger, Ph.D., a professor in the Department of Psychology and the Center for Neural Science at NYU put forth a new theoretical model of attention. Their model suggests that attention co-opts the same neural circuitry used by the visual system to adjust its sensitivity, which allows us to perceive the world irrespective of huge changes in contrast and illumination over the day. 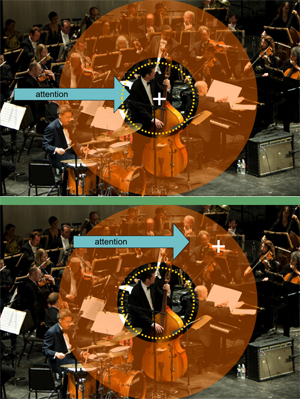 Top: Directing attention to the bassist in the center immunizes the neuron from the suppressive effects of visual stimuli in the surround and we are not distracted by the rest of the orchestra. Bottom: When we instead direct our attention to a stimulus in the surround— the violinist let’s say —the neuron’s response to the now irrelevant bassist is suppressed.

“The central role of attention in perception has been known since the dawn of experimental psychology. An enormous amount of research has been done on the subject, but ostensibly conflicting experimental data have bewildered researchers for years,” says Reynolds. “Our model brought what seemed like a hodgepodge of observations together within a simple framework, and our latest study tested and confirmed predictions of the theory.”

A subtler version of this is the so-called contrast gain control. “Spend a few minutes staring at an Ansel Adams photograph. You will find that your visual system will adapt to low-contrast parts of the image, revealing subtleties that were invisible at first,” explains Reynolds.

Heeger proposed a simple but powerful model of the cortical circuitry that helps mediate this form of automatic gain control. “We believe that this circuitry has been co-opted through evolution, enabling the brain to exploit the same circuitry to adjust its sensitivity endogenously,” says Reynolds. “It doesn’t just adjust sensitivity in response to changes in input strength, it also enables the brain to emphasize task-relevant information and suppress neuronal signals driven by task-irrelevant clutter.”

But the strength and fidelity of these signals also depends on other factors. Scientists generally agree that neurons typically respond more strongly when attention is directed to the stimulus in their receptive fields. In addition, the response of individual neurons can be strongly influenced by what’s happening within the immediate surroundings of the receptive field, a phenomenon known as contextual modulation.

“The surround has the ability to suppress the neuron’s response,” explains first author Kristy Sundberg, Ph.D., a former graduate student in Reynolds’ lab and now a postdoctoral researcher at Yale University. “It keeps us from responding all the time if there’s something that’s big and uniform and not particularly interesting or useful. This raised the possibility that the receptive field surround might provide a way to suppress the responses of task-irrelevant distracters.”

“The attentional system exploits the center-surround organization of the receptive field to keep neurons that transmit task-relevant information from being suppressed by distracters in the environment, while at the same time suppressing the responses of neurons that respond to irrelevant clutter,” says Sundberg. “The brain uses the receptive field surround actively to separate the wheat from the chaff.”