LA JOLLA, CA—Researchers at the Salk Institute have been able to genetically incorporate “unnatural” amino acids, such as those emitting green fluorescence, into neural stem cells, which then differentiate into brain neurons with the incandescent “tag” intact.

They say this new technique, described in the June 16 online issue of Stem Cells, may help scientists probe the mysteries of many different kinds of stem cells in humans as well as the cells they produce. This could be a boon to both basic and clinical research, such as helping to speed development of stem cell-based regenerative medicine. 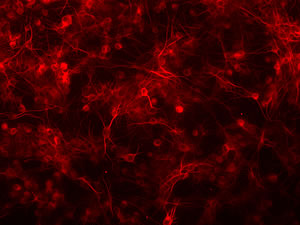 Photo: Curtesy of Dr. Bin Shen of the Salk Institute for Biological Studies

“Stem cells hold great potential for the treatment of various diseases, yet it has been hard to study how they self renew and produce all of the body’s cells,” says the study’s senior author, Lei Wang, assistant professor and Frederick B. Rentschler Developmental Chair in the Chemical Biology and Proteomics Laboratory.

“The ability to genetically incorporate unnatural amino acids in stem cell proteins will accelerate our understanding the signaling networks that control these stem cells.” he says, Thorough understanding of these mechanisms is critical for safe and reliable stem cell therapeutics.

The study’s first author, Dr. Bin Shen, adds that the incorporation of unnatural amino acids “allows researchers to study a particular protein in a living cell or organism, compared to the traditional biochemical methods which are conducted through in vitro settings such as a test tube.” These studies can also be conducted in real-time, says Shen, who is a postdoctoral researcher in Wang’s lab.

Use of unnatural amino acids (Uaas) was developed by Wang and his colleagues, and was first used in bacteria in 2001, and in mammalian cells in 2007. This is the first report of its use in stem cells.

Salk chemists, molecular and cell biologists, and experts in protein structure collaborated on this study, which was conducted in two stages.

The first stage was to see if Uaas could be incorporated into neural stem cells, without disrupting their process of differentiation, and if so, would the fluorescent tag they inserted be carried into neuronal cells created by the stem cells.

“Current methods for Uaa incorporation are not appropriate for stem cells, because the added genes are often lost before the stem cell has a chance to finish differentiation,” Wang says. To solve that problem, the researchers developed a lentiviral-based gene delivery method to incorporate the Uaas into proteins expressed in neural stem cells. “The lentiviral gene therapy technique, which was pioneered by Dr. Inder Verma at Salk, can afford long-lasting expression through stem cell differentiation,” Wang says.

The virus was used to deliver different components needed in the Uaas technology. These consisted of a synthetic transfer RNA (tRNA) that cells use to incorporate amino acids into a protein that is being built inside a cell. The second molecule is an enzymatic synthetase that can recognize the engineered tRNA, and load it with the third engineered molecule – an unnatural amino acid. These amino acids are chemically distinct from the 20 amino acids that naturally exist in the body; they can be engineered for different desirable properties, such as to fluoresce.

“Once you have a stem cell line stably incorporating Uaas, you can custom the Uaa to study stem cell biology,” Wang says. “You also get the bonus of obtaining various mature cells with this ability through differentiation, such as neurons, which are difficult to insert Uaas in and expensive to procure in large amounts.”

In the first set of experiments, the researchers found out that Uaas were successfully incorporated into neural stem cells, the incorporation lasted through the differentiation, and these cells then produced neurons carrying the fluorescent amino acid.

The second set of experiments was to demonstrate how these Uaas can be used to help solve a biological question. The researchers wanted to know how voltage-sensitive ion channels, which are pore forming proteins, work in neurons. In these nerve cells, membrane ion channels respond to changes in electric current – the charged signal that is passed between neurons – that either activate or silence the neurons.

“We are trying to understand how the electric field of cell membranes can turn on or turn off protein activities – like a switch in a house turns on or off lights,” Wang says.

To study this phenomenon, the researchers embedded a fluorescent Uaa into a protein domain that ion channel and other proteins used to sense the electric field in neural stem cells, which produced neurons with the same embedded Uaa. They could then watch, in real time, the fluorescent tag given changes in electrical current across the neuron. “We detected changes in fluorescence intensity of the Uaa when the neurons were stimulated, and these changes are dependent on where the Uaa was incorporated, which hint that different positions of the protein are moving into or outside of the membrane in response to the electric field.”

Wang says this experiment, designed to demonstrate the power of Uaas in brain cells, can also be adapted to study other membrane proteins in other cells, no matter where they exist in the body.

The California Institute for Regenerative Medicine, The March of Dimes Foundation and the National Institutes of Health funded the study.

About CIRM:
The California Institute for Regenerative Medicine is accelerating the development of new therapies for chronic disease and injury by funding stem cell research programs throughout California. We were established in 2004 after Californians passed Proposition 71, the California Stem Cell Research and Cures Initiative. The statewide ballot measure, which provided $3 billion in funding for stem cell research at California universities and research institutions, called for the establishment of a new state agency to make grants and provide loans for stem cell research, research facilities and other vital research opportunities. The mission of CIRM is to support and advance stem cell research and regenerative medicine under the highest ethical and medical standards for the discovery and development of cures, therapies, diagnostics and research technologies to relieve human suffering from chronic disease and injury.

About The March of Dimes:
The March of Dimes is the leading nonprofit organization for pregnancy and baby health. With chapters nationwide and its premier event, March for Babies®, the March of Dimes works to improve the health of babies by preventing birth defects, premature birth and infant mortality. For the latest resources and information, visit marchofdimes.com.

About the National Institutes of Health (NIH):
NIH, the nation’s medical research agency, includes 27 Institutes and Centers and is a component of the U.S. Department of Health and Human Services. NIH is the primary federal agency conducting and supporting basic, clinical, and translational medical research, and is investigating the causes, treatments, and cures for both common and rare diseases. For more information about NIH and its programs, visit www.nih.gov.