LA JOLLA, CA—Mutant presenilin is infamous for its role in the most aggressive form of Alzheimer’s disease-early-onset familial Alzheimer’s-which can strike people as early as their 30s. In their latest study, researchers at the Salk Institute uncovered presenilin’s productive side: It helps embryonic motor neurons navigate the maze of chemical cues that pull, push and hem them in on their way to their proper targets. Without it, budding motor neurons misread their guidance signals and get stuck in the spinal cord.

By putting genes associated with Alzheimer’s disease in a new light, their findings, published in the Jan. 7, 2011, issue of the journal Cell, reveal an important link between the formation of neural circuits and neurodegenerative disorders. “It was a bit of a surprise since we always thought about presenilin in the context of severing neuronal connections rather than wiring the nervous system during embryonic development,” says Howard Hughes Medical Institute investigator Samuel Pfaff, Ph.D., a professor in the Gene Expression Laboratory, who led the study.

Presenilin is a component of the enzyme gamma secretase, which cleaves the amyloid precursor protein, resulting in accumulation of beta amyloid fragments. In Alzheimer’s, these fragments form hard, insoluble plaques, one of the hallmarks of the disease. 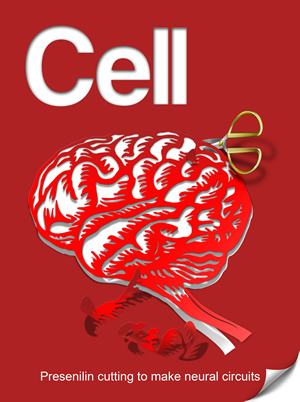 Presenilin, better known for its role in Alzheimer’s disease, aids with the correct wiring of the embryonic nervous system.

Many embryonic guidance molecules persist in the adult central nervous system, where they participate in maintenance, repair and plasticity of neural circuits. “This could explain how a deregulation of guidance signaling by abnormal presenilin may play a role in the pathogenesis of Alzheimer’s disease,” proposes Pfaff.

The Salk study also adds an important new piece to the clockwork mechanism that guides growing nerve cells through the embryo and that depends as much on timing as on spatial accuracy. Understanding how axons find their destinations may help restore movement in people following spinal cord injury, or in those with motor neuron diseases such as Lou Gehrig’s disease, spinal muscle atrophy and post-polio syndrome.

During normal development, trillions of neurons reach out for others with long, slender extensions to touch, connect and wire the budding nervous system. As the hair-like protrusions, called axons, grope around in the developing embryo, trying to find their proper targets, molecular ushers stationed along their path steer them in the right direction.

“Because of the vast number of neurons in the nervous system, ensuring that every single cell is on target creates more biological complexity than we can account for with the genetic information encoded in our genome,” says Pfaff. “There are an estimated 100 trillion connections in our brain and only about 20,000 genes.”

To find their course, growing neurons, especially motor neurons, which need to travel very long distances to reach their targets, navigate their path one small segment at a time, guided at each intersection by intermediate guideposts-chemical cues that attract or repel approaching axons. What’s more, in a tightly regulated choreography, axons often switch allegiances when they reach a critical junction.

“It provides a way of creating some of these intermediate temporal steps,” explains postdoctoral researcher and first author Ge Bai. “It allows the use of a small number of genes to regulate axonal growth by regulating the signals’ effects in a very precise temporal and spatial ways.”

He and his team found presenilin’s unexpected role in controlling the activity of axon guidance signals during a search for genes involved in the fetal development of the nervous system. They had developed a method of engineering mice so that all of their motor neurons glow green. This fluorescence allowed them to visually identify mutant mice that have errors in motor neuron development and function.

One mouse, whose specific defect the researchers had mapped to the gene coding for presenilin, stood out. Failing to exit the spinal cord, its motor neurons got stuck at the midline, a row of cells that lie, moat-like, in the middle of the developing embryo. Bai discovered that in presenilin mutant mice, they were irresistibly attracted to Netrin, which is expressed by the midline.

In normal mice, motor neurons turn a deaf ear to Netrin’s siren call and head out to the periphery. They are able to ignore Netrin because the receptor for Netrin is blocked by the so-called Slit/Robo tag team. Without presenilin, however, Netrin receptor fragments that are resistant to Slit/Robo silencing accumulate in the cell, and the motor neurons are now attracted to Netrin.

“The most satisfying thing we have learned about presenilin is that this is a component that is not directly involved in the detection of signals either as a ligand or a receptor but functions as a very important regulator of their spatiotemporal activity,” says Bai.

Researchers who also contributed to the work include Onanong Chivatakarn, Dario Bonanomi, Karen Lettieri, and Laura Franco at the Salk Institute; Caihong Xia and Le Ma at the Zilkha Neurogenetic Institute at the University of of Southern California in Los Angeles; Elke Stein in the Department of Molecular, Cellular and Developmental Biology at Yale University, New Haven, CT; and Joseph W. Lewcock, formerly a postdoc in the Pfaff lab and now in the Department of Neurobiology at Genentech, San Francisco.

The work was funded in part by the Howard Hughes Medical Institute and the National Institutes of Health.