LA JOLLA, CA—A collaborative study by researchers at the Salk Institute for Biological Studies uncovered that the tumor suppressor p53, which made its name as “guardian of the genome,” not only stops cells that could become cancerous in their tracks but also controls somatic cell reprogramming.

Although scientists have learned how to reprogram adult human cells such as skin cells into so-called induced pluripotent stem cells (iPSCs), the reprogramming efficiency is still woefully low. The Salk study, published in the Aug. 9 advance online edition of Nature, gives new insight into why only a few cells out of many can be persuaded to turn back the clock. 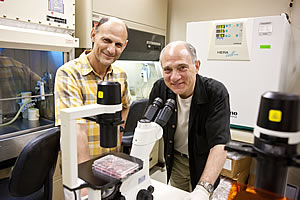 “Although we have been able to reprogram specialized cells for a while now, there had been nothing known about the control mechanisms that prevent it from happening spontaneously in the body and why it has been so hard to change their fate in a Petri dish,” says Juan-Carlos Izpisúa Belmonte, Ph.D., a professor in the Gene Expression Laboratory, who worked closely with Geoffrey M. Wahl, Ph.D., also a professor in the Gene Expression Laboratory.

Their findings bring iPSCs technology a step closer to fulfilling its promise as source of patient-specific stem cells but also force scientists to rethink the development of cancer.

“There’s been a decade-old idea that cancer arises through the de-differentiation of fully committed and specialized cells but eventually it was discarded in favor of the currently fashionable cancer stem cell theory,” says Wahl. “Now, that we know that p53 prevents de-differentiation, I believe it is time to reconsider the possibility that reprogramming plays a role in the development of cancer since virtually all cancer cells lose p53 function in one way or another.”

As mammalian embryos transition through a series of developmental stages, the choices of embryonic stem cells, which enjoy almost limitless prospects, are progressively limited till they eventually give rise to the roughly 200 cell types that make up our body and generally lack the ability to revert back to a less specialized stage.

Although differentiation is generally irreversible, scientists have developed several methods to overcome the cells’ reluctance to be reprogrammed. The most widely used technology involves the forced expression of four transcription factors-Oct4, Sox2, Klf4, and c-Myc-in fully committed adult cells. 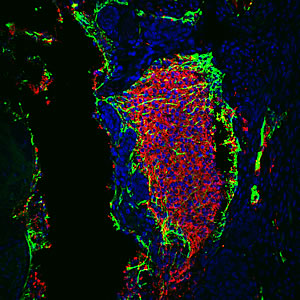 “Unfortunately, Klf4 and c-Myc are oncogenes and adding them carries the risk of inducing cancer,” says Belmonte. Yet, despite the extra push provided by those powerful oncogenes, only a tiny fraction transmogrifies into iPSCs that look and act like embryonic stem cells, leading Belmonte to question whether what they were doing to get the cells to reprogram induced a response that stopped the cells from growing?

A conversation with his next-door neighbor, cancer expert Wahl provided some fresh ideas that could be tested in the lab. “Normally, cells don’t reprogram so there must be a mechanism in place that prevents it,” says Wahl. “We knew that c-Myc and some of the other genes that are required for reprogramming activate the tumor suppressor p53 and we wondered whether it had any part in it.”

And sure enough, experiments by postdoctoral researchers and co-first authors Teruhisa Kawamura, Ph.D., and Jotaro Suzuki, Ph.D., revealed that adding the reprogramming factors c-Myc and Klf4, alone or in various combinations activated the p53 pathway. As a first-responder, the tumor suppressor p53 is called to action when cells experience stressful conditions. Depending on the situation, p53 then turns on genes that halt cell division to allow time for repairs or, when all rescue attempts prove futile, order the cell to stop dividing forever or to commit suicide.

In cells genetically engineered to lack p53, reprogramming efficiency was at least 10-fold increased compared to control cells, demonstrating that p53 clearly played an important role in reigning in cells trying to revert back into a stem-like state.

Because iPSCs generated with the full complement of reprogramming factors run the risk to turn malignant, Belmonte and his team wanted to know whether mouse cells lacking p53 could be reprogrammed using only two factors, Oct4 and Sox2. The cells readily converted into iPSCs and gave rise to healthy, full term mice that were able to reproduce passing the ultimate test for pluripotent embryonic stem cells.

“This very successful collaboration is a prime example of what makes the Salk such a special place,” says Wahl. “Juan Carlos and I talk every day and we approach the same question from very different perspectives. He comes from a developmental biology perspective, while I come from the cancer side but when put together they can make for a great story.”

For information on the commercialization of this technology, please contact the Salk Office of Technology Management and Development at (858) 453-4100, Ext. 1278.

This work was supported by the National Institutes of Health, grants from Tercel, Marato, the G. Harold and Leila Y. Mathers Charitable Foundation and the Fundacion Cellex.

Researchers who also contributed to the work include Yunyuan V. Wang, Ph.D. in the Wahl laboratory, Sergio Menendez, Ph.D., Laura Batlle Morera, Ph.D., and Angel Raya, Ph.D., all at the Center for Regenerative Medicine in Barcelona, Spain.