Discovery of circadian clock in mice hair reveals period of time when damage from radiotherapy can be quickly repaired, keeping hair intact

Discovery of circadian clock in mice hair reveals period of time when damage from radiotherapy can be quickly repaired, keeping hair intact

LA JOLLA, CA—Discovering that mouse hair has a circadian clock – a 24-hour cycle of growth followed by restorative repair – researchers suspect that hair loss in humans from toxic cancer radiotherapy and chemotherapy might be minimized if these treatments are given late in the day.

The study, which appears in the early online edition of the Proceedings of the National Academy of Sciences (PNAS), found that mice lost 85 percent of their hair if they received radiation therapy in the morning, compared to a 17 percent loss when treatment occurred in the evening.

The researchers, from Salk Institute for Biological Studies, the University of Southern California (USC) and the University of California, Irvine (UCI), worked out the precise timing of the hair circadian clock, and also uncovered the biology behind the clockwork – the molecules that tells hair when to grow and when to repair damage. They then tested the clock using radiotherapy.

“These findings are particularly exciting because they present a significant step towards developing new radiation therapy protocols that include minimizing negative side effects on normal tissues, such as hair or bone marrow, while maintaining the desired effects on cancer cells,” says Maksim Plikus, assistant professor of developmental and cell biology at UCI and the study’s first author. “We will now apply our findings to design novel circadian rhythm-based approaches to cancer therapy.” 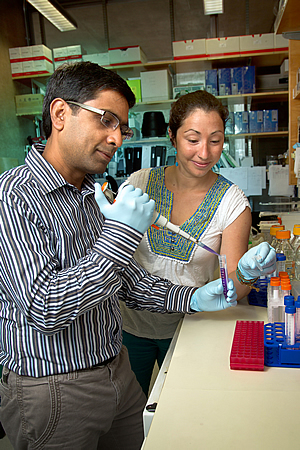 The scientists can’t say their findings will directly translate to human cancer therapy because they haven’t yet studied that possibility. But they say it is becoming increasingly clear that body organs and tissues have their own circadian clocks that, when understood, could be used to time drug therapy for maximum benefit.

“There are clocks everywhere in the body – clocks that have their own unique rhythm that, we found, have little to do with the central clock in our brains,” says the study’s co-lead investigator, Satchidananda Panda, an associate professor in Salk’s Regulatory Biology Laboratory and an expert on circadian rhythm.

“This suggests that delivering a drug to an organ while it is largely inactive is not a good idea. You could do more damage to the organ than when it is awake, repairing and restoring itself,” says Panda. “If you know when an organ is mending itself, you might be able to deliver more potent doses of a drug or therapy. That might offer a better outcome while minimizing side effects.”

Panda uses genetic, genomics and biochemical approaches to identify genes under circadian regulation in different organs and to understand the mechanism of such regulation. Plikus at UCI and Cheng-Ming Chuong, professor of pathology at the Keck School of Medicine of USC and the study’s co-lead investigator, are experts on hair regeneration.

These researchers and their colleagues teamed together to find and then take apart the mouse hair circadian clock. It was a long and difficult study, Chuong says.

“Hair is a very complicated organ, featuring different types of cells going through different stages in the life cycle in a very tiny space,” Chuong says. “We found that hair in mice grows fast in the morning and slows down at night, engaging a very powerful clock.”

Every time hair cells divide, they pick up DNA damage that needs to be repaired. The scientists discovered that mice hair cells repair that damage primarily in the evening. This process is akin to using a kitchen dishwasher, Panda says. “Most of us run the dishwasher after we have accumulated a lot of dirty dishes – we don’t run it every time a dish is dirty. The same is true for cells. They clean up – repair their DNA – at one time each day,” Panda says.

Radiotherapy damages DNA in cells that divide rapidly, which is why it is used against growing cancer cells. That means that DNA damage to hair cells from radiotherapy delivered in the morning is not repaired until the evening, leading to hair loss. Damage from radiotherapy at night, however, is minimized because hair cells, already in the process of repairing DNA, can quickly heal.

“While we don’t yet know if human hair follows that same clock we found in mice hair, it is true that facial hair in men grows during the day, resulting in the proverbial 5 o’clock shadow. There is no 5 a.m. shadow if you shave at night,” Panda says.

The researchers found that cancer cells do not have circadian clocks, because they are dividing all the time.
“That means cancer therapy does not have to be timed to be more effective,” Panda adds. “The timing has to do with minimizing collateral damage from normal cells affected by these treatments.”

Scientists know for certain that other organs, such as the liver, use a circadian clock, and they suspect that all human tissue is similarly regulated, although the clocks may be timed differently.

“There are many clinical implications for this cacophony of internal clocks, beyond the timing of drug therapy,” Panda says. “For example, some researchers suspect that obesity and diabetes occurs when an organ or organs – perhaps the liver or stomach or pancreas – should be sleeping, but is awoken by food that needs to be processed.

“These local clocks do a lot more things than the central clock in the brain, which primarily regulates sleeping,” he says. “This field of research is exciting and may, someday, contribute to human health.”

Other contributing authors are Christopher Vollmers and Amandine Chaix from Salk, Damon de la Cruz from USC, and Raul Ramos from UCI.

The study was supported by grants from the National Institutes of Health (AR 42177, AR47364, DK091618, P30 CA014195), The Leona M. and Harry B. Helmsley Charitable Trust, the Dana Foundation, the Glenn Foundation for Medical Research and the Edward Mallinckrodt Jr. Foundation. The authors declare no conflicts of interest.