LA JOLLA, CA—Just like a conductor cueing musicians in an orchestra, Fgf10, a member of the fibroblast growth factor (Ffg) family of morphogens, lets brain stem cells know that the moment to get to work has arrived, ensuring that they hit their first developmental milestone on time, report scientists at the Salk Institute for Biological Studies in the July 16, 2009, edition of the journal Neuron.

Their findings not only add new insights into brain development and a novel function for Fgfs, but also reveal a possible mechanism for the selective expansion of specific brain areas over the course of evolution, such as the greatly increased size of the frontal lobe in humans. 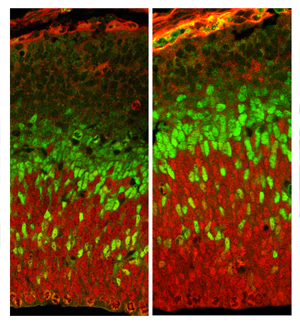 Without Fgf10 (image on the right), neuronal stem cells fail to differentiate on time. As a consequence they keep multiplying generating a bigger pool of radial glia (shown in red), which in turn produce more neurons ultimately resulting in a larger cortex. Basal progenitors are shown in green.

During embryonic brain development, stem cells in charge of building the cortex—the largest brain structure and seat of most higher cognitive functions—pass through a series of tightly regulated stages: from omnipotent stem cell to cortical progenitors cells capable of producing neurons.

“The timing of each of these transitions has critical implications for brain development, since minor changes in the proportion of progenitors exhibiting one or the other division mode at early stages will result in substantial changes in the number of neurons and the size of the cortex,” says Dennis O’Leary, Ph.D., a professor in the Molecular Neurobiology Laboratory, who led the study.

Early in corticogenesis, stem cell-like progenitor cells known as neuroepithelial cells under go symmetric cell division, producing two identical progenitors to expand the pool of neuroepithelial cells. Later on, they differentiate into more mature progenitor cells referred to as radial glia, which then divide assymmetrically to produce a pair of unlike daughter cells: one radial glia to maintain the pool of progenitor cells and a cortical neuron or a basal progenitor. The latter will migrate outward and then produce neurons to establish the superficial layers of the cortex.

But little is known about the mechanisms that mediate the critical transition period that bridges the early expansion phase of neuroepithelial cells and the later neurogenic phase, which produces all the neurons that will eventually form the six layers of the cortex. 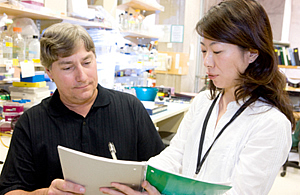 Initially, postdoctoral researcher and first author Setsuko Sahara, Ph.D., was more interested in area patterning when she started looking at the effects of deleting Fgf10 in mouse brain. But it quickly became clear that the primary function of Fgf10 was to regulate the differentiation of radial glia, a role that has significant implications for brain size, including the size of specific cortical areas. “These mice had substantially enlarged brains,” says Setsuko, “but the structure was perfectly fine.”

A closer look revealed that the transition from the expansion stage to the neurogenic phase exhibited by cortical progenitors was delayed by approximately two days. “As a consequence neuroepithelial cells keep multiplying generating a bigger pool of radial glia, which in turn produce more neurons ultimately resulting in a larger cortex,” explains Sahara. Interestingly, the increase in size was limited to the frontal cortex, demonstrating that at the time the population of early progenitors was abnormally expanded in Fgf10 mutants, their area identity had been fixed.

“These findings demonstrate a direct mechanism employed during normal development to regulate brain size,” says O’Leary. “These findings also have potential implications for how cortical areas have evolved. Selectively expanding the progenitor pool by Fgf10 regulation of the timing of radial glia differentiation could account for the selective expansion of the frontal cortex, which has been greatly expanded in humans and is thought to be important for evolving what are considered typically human traits.”

This work was supported by the National Institutes of Health, the JSPS Fellowships for Research Abroad and the Uehara Memorial Foundation.