Biologists know that a cellular clock composed of structures at the chromosome end known as telomeres records how many “lives” a cell has expended. Up to now, investigators have not yet defined how the clock’s ticking signals the approach of cellular oblivion. 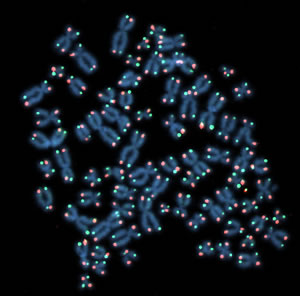 Each time a cell divides, the protective “caps” at the tip of chromosomes (red and green dots) erode a little bit further. As telomeres wear down, their DNA undergoes massive changes in the way it is packaged. These changes likely trigger what we call “aging”.

In a study published in the Oct. 3, 2010, issue of Nature Structural and Molecular Biology, a team led by Jan Karlseder, Ph.D., at the Salk Institute for Biological Studies reports that as cells count down to senescence and telomeres wear down, their DNA undergoes massive changes in the way it is packaged. These changes likely trigger what we call “aging”.

“Prior to this study we knew that telomeres get shorter and shorter as a cell divides and that when they reach a critical length, cells stop dividing or die,” said Karlseder, an associate professor in the Molecular and Cell Biology Laboratory. “Something must translate the local signal at chromosome ends into a huge signal felt throughout the nucleus. But there was a big gap in between.”

Karlseder and postdoctoral fellow Roddy O’Sullivan, Ph.D., began to close the gap by comparing levels of proteins called histones in young cells—cells that had divided 30 times—with “late middle-aged” cells, which had divided 75 times and were on the downward slide to senescence, which occurs at 85 divisions. Histone proteins bind linear DNA strands and compress them into nuclear complexes, collectively referred to as chromatin.

Karlseder and O’Sullivan found that aging cells simply made less histone protein than do young cells. “We were surprised to find that histone levels decreased as cells aged,” said O’Sullivan, the study’s first author. “These proteins are required throughout the genome, and therefore any event that disrupts this production line affects the stability of the entire genome.”

The team then undertook exhaustive “time-lapse” comparisons of histones in young versus aging cells and confirmed that marked differences in the abundance and variety of histones were evident at every step as cells moved through cell division.

O’Sullivan calls the “default” histone pattern displayed by young cells “happy, healthy chromatin.” By contrast, he says, aging cells appear to undergo stress as they duplicate their chromosomes in preparation for cell division and have difficulty restoring a “healthy” chromatin pattern once division is complete.

Comparisons of histone patterns in cells taken from human subjects—a 9- versus a 92-year-old—dramatically mirrored histone trends seen in cell lines. “These key experiments suggest that what we observe in cultured cells in a laboratory setting actually occurs and is relevant to aging in a population,” says Karlseder.

The initiation of diseases associated with aging, such as cancer, is largely attributed to DNA, or genetic, damage. But this study suggests that aging itself is infinitely complex: that progressive telomere shortening hastens chromosomal aging by changing the way genes entwine with histones, so-called “epigenetic” changes. How DNA interacts with histones has enormous impact on whether genes are expressed—hence the current intense interest in the relationship of the epigenomic landscape to disease states.

Rescue experiments in which the team cosmetically enhanced aging cells confirmed that signals emitted by eroding telomeres drove epigenetic changes. When aging cells were engineered to express telomerase, the enzyme that restores and extends stubby telomeres, those rejuvenated cells showed histone levels reminiscent of “happy, healthy chromatin,” and a partial return to a youthful chromatin profile.

Lest you sink your savings into schemes to elongate your telomeres, beware. “The flip side of elongating telomeres is that you enable cells to grow for much longer periods and can generate what are called “immortal” cells,” says Karlseder. “That takes you one step closer to cancer cell development.”

Up to now, the Karlseder lab has mostly focused on interactions between telomeres and DNA repair mechanisms. This paper now pushes them into the field of epigenetics. “We will continue to examine epigenetic changes in cells at different ages,” says Karlseder. “We now want to determine if histone changes follow a linear process or whether they kick in as we age.”

Also contributing to this work were Stuart Schreiber, Ph.D., of the Broad Institute of Harvard and MIT and Howard Hughes Medical Institute and his postdoctoral fellow Stefan Kubicek, Ph.D.

The study was funded by the National Institutes of Health, the George E. Hewitt Foundation for Medical Research, and the Ernst Schering Research Foundation and the European Union.