LA JOLLA,CA—Tickets are now available online for the 18th annual “Symphony at Salk-a concert under the stars” featuring multi-talented
singer Katharine McPhee who will perform at the Institute on August 24 with the
San Diego Symphony and
acclaimed guest conductor Maestro Thomas Wilkins.

Tickets to the gala are $250 each and include a pre-concert champagne
reception, concert seating, a gourmet dinner with wine and refreshments, and reserved
parking. The proceeds from the event directly benefit the leading-edge biological
research at the Institute and its community education programs. 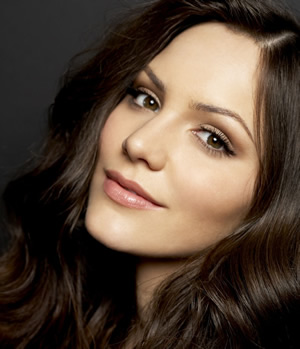 Symphonyat Salk is one of the cultural highlights of the summer in San Diego and
an annual sell out. The Institute’s signature gala, held in the iconic courtyard,
offers a one-of-a-kind concert experience, where the audience takes in spectacular
sunset views overlooking the Pacific Ocean as they enjoy a gourmet dinner and watch
the evening’s musical performance.

Guest artist Katharine McPhee, an award winning singer and popular actress from
the television series SMASH, gained fame as a standout contestant on the fifth season
of the Fox reality show American Idol, where she impressed audiences and judges
alike with her stunning voice. McPhee was quickly signed to RCA Records, where her
first single, “Somewhere Over the Rainbow/My Destiny,” debuted at number two on
Billboard’s Hot Singles Sales chart. She followed that success with her self-titled
debut album, which exploded onto the Billboard 200 chart in 2007, and was ranked
the best chart debut for a female artist in two years. The album went gold in 2008.
In 2009, McPhee garnered a Young Hollywood Award for Best Female Vocalist. She spent
2010 touring the country with her album Unbroken, which included the hit single
“Had It All.”

McPhee is currently signed with Columbia Records and later this year will release
her first album for the studio, featuring her collaborations with some of the industry’s
top songwriters.

In addition to her musical accomplishments, McPhee has embarked on a successful
acting career that began when she nabbed a part on the popular web series, lonelygirl15
and then went on to star in episodes of CSI: NY, Community, The Family Guy and several
movies, including The House Bunny and You May Not Kiss the Bride before landing
a lead role on the NBC series SMASH. She was also featured in two hit PBS specials,
Foster and Friends and Chris Botti in Boston, alongside Sting, Andrea Bocelli and
John Mayer.

Maestro Thomas Wilkins returns to Salk to lead the San Diego Symphony for the ninth
successive year as guest conductor of the concert. A master at communicating and
connecting with audiences, he has directed top orchestras throughout the United
States and dedicated himself to bringing his passion for music and education to
kids and grown-up audiences everywhere. One of the country’s most renowned conductors,
Wilkins is Music Director of the Omaha Symphony, Principal Guest Conductor of the
Hollywood Bowl Orchestra and holds the Germeshausen Family and Youth Concert Conductor
chair with the Boston Symphony.

Symphony at Salk is one of about 100 annual performances by the San Diego Symphony,
considered one of the finest orchestras in the country. Since its inception over
100 years ago, the Symphony has been committed to providing musical experiences
of superior quality for the local community and beyond by offering a wide range
of exceptional concert experiences including the Masterworks, Winter and Summer
Pops and the Light Bulb Series. Through a rich mixture of innovative and educational
programming designed to appeal to all ages and cultures, the Symphony makes music
an integral part of the cultural and intellectual fabric of the San Diego region.

The evening begins with a champagne reception at 5:30 p.m. Guests will be served
a gourmet dinner specially prepared by renowned chef Jeffery Strauss of Pamplemousse
Grille at 6:30 p.m., followed by the music program which begins at 8:00 p.m. Individual
tickets for Symphony at Salk are $250 and can be purchased on the
Symphony at Salk website
or by calling 858-597-0657. Sponsorship packages range from $2,500 to $75,000.
For additional ticket or sponsorship information, please visit the website at www.salk.edu/symphony,
or e-mail: symphony@salk.edu.
The Salk Institute for Biological Studies is located at 10010 North Torrey Pines
Rd., La Jolla, CA, 92037.

The Salk Institute for Biological Studies is one of the world’s preeminent basic
research institutions, where internationally renowned faculty probe fundamental
life science questions in a unique, collaborative, and creative environment. Focused
both on discovery and on mentoring future generations of researchers, Salk scientists
make groundbreaking contributions to our understanding of cancer, aging, Alzheimer’s,
diabetes and infectious diseases by studying neuroscience, genetics, cell and plant
biology, and related disciplines.

Faculty achievements have been recognized with numerous honors, including Nobel
Prizes and memberships in the National Academy of Sciences. Founded in 1960 by polio
vaccine pioneer Jonas Salk, M.D., the Institute is an independent nonprofit organization
and architectural landmark.