LA JOLLA–Scientists at the Salk Institute have scored a rare hat trick with a third assistant professor from the Waitt Advanced Biophotonics Center being named a recipient of the prestigious National Institutes of Health (NIH) Director’s New Innovator Award.

Hu Cang will receive the New Innovator Award for 2014, joining the two other Salk researchers who were also previously recipients of the prize. The award will provide Cang with $1.5 million to support his research on cutting-edge microscopy. Only 50 New Innovator Awards were given out this year. 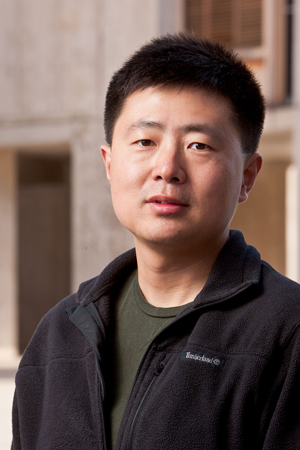 The NIH Director’s New Innovator Award is a highly selective program with hundreds of researchers from the nation’s top scientific institutions competing for the award. Cang, along with a select group of other young investigators, will receive this funding to pursue novel ideas with the potential to have a significant impact on human health.

“We are very proud of Dr. Cang and grateful for NIH’s continuing support of young researchers who pursue creative and highly innovative science,” says William Brody, president of the Salk Institute. “The ability to see molecular components of cellular structures are crucial to advancing biology and medicine, and his work is expanding the frontiers of microscopy.”

The New Innovator award will support Cang in his work in developing a “super lens” that sees things far smaller than previously possible. Cang’s group has already made a microscope that can focus light down to a smaller point than ever before, letting them track individual proteins on the surface of a cell. He’s particularly interested in using his new approach to study the structure of genetic material, which is notoriously hard to visualize. Being able to see how strands of DNA fold and loop when they’re packed within a cell nucleus might reveal how genes are turned on and off in both healthy and diseased cells.

“The fact that all three of our junior faculty at the Waitt Advanced Biophotonics Center have won this prestigious award speaks to our ability to recruit the very best young scientists and highlights the exceptionally high quality of science that we do here,” says Martin Hetzer, faculty director of the center and holder of Salk’s Jesse and Caryl Philips Foundation Chair.

“By putting these incredible tools of the Biophotonics Center in the hands of Salk investigators in an interdisciplinary teamwork environment, breakthroughs are bound to happen,” says Ted Waitt, vice-chair of the Salk Institute Board of Trustees and chairman of the Waitt Foundation. “This exciting hat-trick leads the way to a continued bright future of the Center and speaks to the high quality of research at the Salk Institute.”

“Brilliant scientists, such as past New Innovator award recipient Björn Lillemeier and others, are able to make groundbreaking discoveries because of technologies the Salk has in place to advance success,” said Heini Thyssen, former trustee and founder of the Nomis Laboratory at the Salk Institute.

Lillemeier, holder of Salk’s Helen McLoraine Developmental Chair, aims to understand how cellular communication is controlled in space and time. He creates unique optical microscopy techniques that visualize the molecular organization of plasma membrane signaling in live cells. His research reveals new signaling mechanisms that can be used to target the large number of diseases associated with membrane signaling defects.

Nimmerjahn, holder of the Hearst Foundation Developmental Chair, develops novel research tools to understand brain cells called glia in intact healthy and diseased brains. The New Innovator award supported his research into microglia, the resident immune cells in the brain that are involved in essentially all brain pathologies. Better understanding their signaling mechanisms may lead to new or improved disease prevention and treatment strategies.