The 'weakest link' in the aging proteome

Home - Salk News - The ‘weakest link’ in the aging proteome

The ‘weakest link’ in the aging proteome

LA JOLLA, CA—Proteins are the chief actors in cells, carrying out the duties specified by information encoded in our genes. Most proteins live only two days or less, ensuring that those damaged by inevitable chemical modifications are replaced with new functional copies.

In a new study published August 29, 2013 in Cell, a team led by researchers at the Salk Institute for Biological Studies and The Scripps Research Institute (TSRI) have now identified a small subset of proteins in the brain that persist for longer, even more than a year, without being replaced. These long-lived proteins have lifespans significantly longer than the typical protein, and their identification may be relevant to understanding the molecular basis of aging. 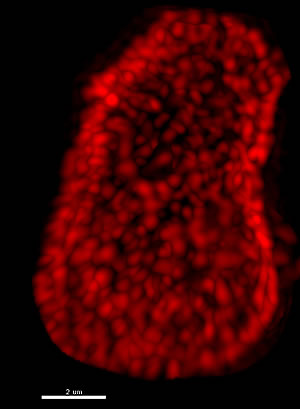 This super resolution image shows the nucleus of a cell from a rat brain. Each red spot is an individual nuclear pore complex, cellular structures found on the envelope surrounding the nucleus, which are crucial to communications between the nucleus and the rest of the cell. The Salk scientists studied long lived proteins that serve as important structural components of these complexes.

“Protein longevity can be a major contributor to cellular aging,” says Martin Hetzer, a professor in Salk’s Molecular and Cell Biology Laboratory and holder of the Jesse and Caryl Philips Foundation Chair, who was a senior author of the study with TSRI Professor John Yates. “Simply identifying all long-lived proteins allows us to focus our studies on these specific proteins, which may be the weakest link in the aging proteome.”

The study provides the first comprehensive and unbiased identification of the long-lived proteome, the entire set of proteins expressed by a genome under a given set of environmental conditions. In a study published in Science last year, Hetzer and his colleagues identified long-lived proteins in one sub-cellular location, namely the nucleus.

The new study takes the Science findings one step further by providing a system-wide identification of proteins with long lifespans in the rat brain, a laboratory model of human biology. The scientists found that long-lived proteins included those involved in gene expression, neuronal cell communication and enzymatic processes, as well as members of the nuclear pore complex (NPC), which is responsible for all traffic into and out of the nucleus.

Furthermore, they found that the NPC undergoes slow but finite turnover through the exchange of smaller sub-complexes, not whole NPCs, which may help clear inevitable accumulation of damaged components. 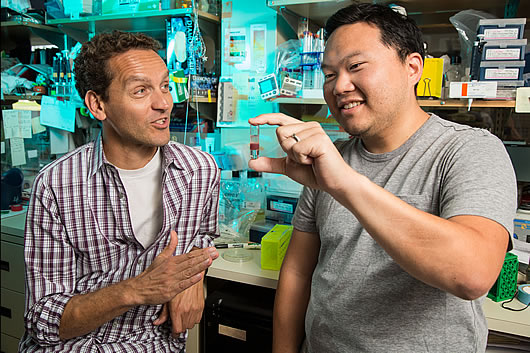 “This can be thought of as similar to maintaining a car, where you don’t replace the entire car, just the components that have broken down,” says lead study author Brandon Toyama, a postdoctoral fellow in Hetzer’s laboratory.

Hetzer and his colleagues previously found that NPC deterioration might be a general aging mechanism leading to age-related defects in nuclear function. Other laboratories have linked protein homeostasis, or internal stability, to declining cell function and, thus, disease. The new findings reveal cellular components that are at increased risk for damage accumulation, linking long-term protein persistence to the cellular aging process.

“Now that we have identified these long-lived proteins, we can begin to examine how they may be affected in aging and what the cell does to compensate for inevitable damage,” says Toyama.

Hetzer’s team is now identifying targets that are involved in aging and potential pathways to address this. “We’re starting to think about how to get functionality back to that younger version of the protein,” he says.

Other researchers on the study were Jeffery N. Savas, Sung Kyu Park and John R. Yates of TSRI and Michael S. Harris and Nicholas T. Ingolia of the Carnegie Institute for Science.

The work was supported by the National Institutes of Health, the Hewitt Foundation, the Glenn Foundation for Medical Research, the American Cancer Society, the Ellison Medical Foundation, and the Searle Scholars Program.