The two faces of Mdmx: Why some tumors don't respond to radiation and chemotherapy

Home - Salk News - The two faces of Mdmx: Why some tumors don’t respond to radiation and chemotherapy

The two faces of Mdmx: Why some tumors don’t respond to radiation and chemotherapy

LA JOLLA, CA—A tightly controlled system of checks and balances ensures that a powerful tumor suppressor called p53 keeps a tight lid on unchecked cell growth but doesn’t wreak havoc in healthy cells. In their latest study, scientists at the Salk Institute for Biological Studies suggest just how finely tuned the system is and how little it takes to tip the balance.

When unprovoked, at least two negative regulators—the related proteins Mdm2 and Mdmx—prevent p53 from unleashing its power to kill. But just slightly increasing the amount of available Mdmx, which grips p53 and renders it inactive, the Salk researchers discovered, made mice remarkably resistant to the harmful effects of radiation but very susceptible to the development of oncogene-induced lymphomas.

“Our experiments emphasize how subtle and precarious the balance is,” says postdoctoral researcher and first author Yunyuan V. Wang. “A slight shift of balance and the mice survive the equivalent of Chernobyl but are in big trouble when an oncogene is activated.”

Their findings, to be published in the July issue of the journal Cancer Cell, could explain why some tumors don’t respond to radiation or chemotherapy, and provide novel routes for the development of new anti-cancer therapies.

As a powerful tumor suppressor, p53 turns on genes that either halt cell division to allow time for repair of damaged DNA or, when all rescue attempts prove futile, to prevent cells with genetic defects from dividing, as this would fuel the development of cancer. Consequently, before any tumor cell can start proliferating willfully, it needs to escape from p53’s iron fist.

“One way or another, p53 function is compromised in all cancers. Either p53 itself is mutated or there is a problem with one of the proteins that regulate p53’s activity,” says the study’s leader Geoffrey M. Wahl, Ph.D., a professor in the Gene Expression Laboratory. “Our hope is that we can develop small molecule drugs that will activate p53 in those tumors where it is still functional but inactivated by one of its negative regulators.” 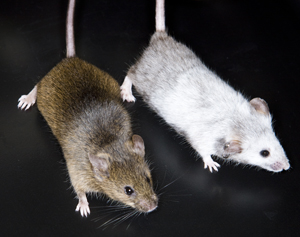 Mice that are unable to fully activate the powerful tumor suppressor p53 are resistant to high doses of radiation. The only noticeable effect is a premature graying of their coat. Both mice are the same age.

In an earlier study, Wahl and his team discovered that Mdm2 and Mdmx cooperate to prevent p53 from being activated, with Mdm2 being primarily responsible for degrading p53, while Mdmx is more effective at preventing p53 from turning on genes. But how p53 shakes off its negative regulators when cells experience one of the myriad stresses that activate p53 has been the topic of much discussion.

One view holds that after DNA damage occurs, enzymes directly modify p53 and that those modifications change the structure of p53 in such a way that neither Mdm2 nor Mdmx are able to bind. In an alternative scenario the same enzymes—kinases that attach phosphate groups to proteins—modify the negative regulators, accelerating their degradation and freeing p53 of their antagonists. Of course, it may well be that both views are correct, but the extent to which each contributes to p53 control remains an important unanswered question.

To get to the bottom of the dispute, Wang genetically engineered mice to eliminate three key phosphorylation sites in Mdmx. “The mutations stabilize Mdmx and as a result we saw consistently lower basal activity of p53. Surprisingly, we observed no increase in spontaneous tumor formation” she says. “In the absence of catastrophic DNA damage these low levels of p53 were enough to suppress tumorigenesis.”

But in order to put cells on notice or commandeer them to commit suicide in the face of irreparable damage, these animals need to activate p53, which in turn activates a whole range of target genes. “Levels of active p53 still go up,” says Wang, “but they never reach the critical threshold that’s required to elicit a biological response.”

As a result, these animals became very resistant to the deleterious effects of high doses of radiation. When blasted with 10 Gy of irradiation—enough to wipe out all blood stem cells in the bone marrow of normal mice—mutant mice that were unable to fully activate p53 experienced only a modest blood count drop. The other noticeable effect was a premature graying of their coat.

“Both radiation and chemotherapy are commonly used for the treatment of cancer and act by inducing DNA damage and subsequent cell death through p53. As such, tumors that retain normal p53 are more likely to respond to treatment while tumors carrying a defective p53 pathway are often less responsive,” says Wahl. Ideally, we want to find a therapeutic target, such as MDM2 or MDMX, that would increase p53 activity in tumor cells while minimally impacting other vital functions such as hematopoiesis.”

Since p53 also protects against wayward cell proliferation caused by oncogenes such as c-myc, the researchers permanently activated c-myc in the B cell lineage to mimic human endemic Burkitt’s lymphomas. They observed that mice with defective Mdmx developed very aggressive lymphomas at a very young age. Thus, control by Mdmx is critical to balance the severity of the response to DNA damaging agents, while also preventing induction of cancer by activated oncogenes.

This work was supported by grants from the National Cancer Institute.

About the Salk Institute for Biological Studies: The Salk Institute for Biological Studies is one of the world’s preeminent basic research institutions, where internationally renowned faculty probe fundamental life science questions in a unique, collaborative, and creative environment. Focused on both discovery and mentoring future generations of researchers, Salk scientists make groundbreaking contributions to our understanding of cancer, aging, Alzheimer’s, diabetes, and cardiovascular disorders by studying neuroscience, genetics, cell and plant biology, and related disciplines.