The stemness of cancer cells

The stemness of cancer cells

LA JOLLA, CA—A close collaboration between researchers at the Salk Institute for Biological Studies and the Institute for Advanced Study found that the tumor suppressor p53, long thought of as the “Guardian of the Genome,” may do more than thwart cancer-causing mutations. It may also prevent established cancer cells from sliding toward a more aggressive, stem-like state by serving as a “Guardian against Genome Reprogramming.”

The new work, reported by Geoffrey M. Wahl, Ph.D., and Benjamin Spike, Ph.D., at Salk Institute and Arnold J. Levine, Ph.D., and Hideaki Mizuno, Ph.D., at IAS, Princeton, in this week’s online edition of the Proceedings of the National Academy of Sciences, revealed striking parallels between the increased reprogramming efficiency of normal adult cells lacking p53, the inherent plasticity and tumorigenicity of stem cells, and the high incidence of p53 mutations in malignant cancers.

“A poorly differentiated appearance, cellular and genetic heterogeneity are well- known hallmarks of many aggressive and deadly cancers,” explains Wahl, a professor in the Gene Expression Laboratory at Salk, “and it has recently been suggested that these properties result from the presence of stem-like cancer cells. Our findings indicate that p53 mutations could allow cells within a tumor to turn back time by acquiring a stem cell–like ‘program.'” 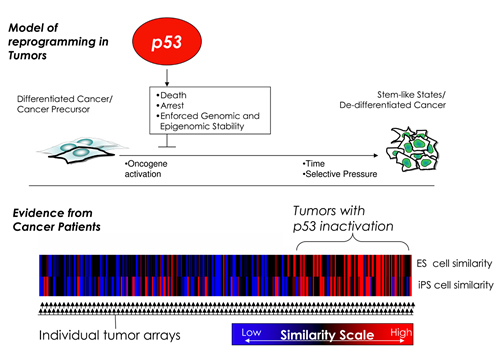 Cancer cells need to acquire some of the characteristics of stem cells to survive and adapt to ever-changing environments. These include immortality, the ability to self-renew and the capacity to produce progenitors that differentiate into other cell types. “Each tumor represents a diverse collection of cancer cells,” says Wahl, “and the question was how best to explain how such heterogeneity arises.”

In the past, the cellular diversity of cancers has mostly been attributed to genetic instability, which many years ago Wahl and his team showed to occur when p53 is disabled. As the tumor cell population expands, so goes the prevailing theory, individual cells pick up random mutations, and their molecular identity starts to diverge. By the time the cancer is detected, the millions of cells that make up the tumor have become as different from each other as third cousins twice removed.

There had also been a longstanding notion that fully committed and specialized cells might de-differentiate over the course of tumor initiation and progression, although it was unclear how this might be achieved. Eventually the theory was discarded in favor of the currently fashionable cancer stem cell theory, which holds that cancer stem cells—the cells that propagate a tumor and that could potentially arise from normal stem or early progenitors—are distinct from the bulk of the cancer cells in that they can self-renew as well as produce non-stem cells, just as normal stem cells do.

“Our findings indicate that cancer cells that resemble stem cells need not be part of the original tumor but rather may emerge during later stages of tumor development, facilitated by the loss of p53,” says postdoctoral researcher and co-first author Benjamin T. Spike, Ph.D. “The observed tumor heterogeneity is probably a combination of growing genomic instability and epigenetic instability associated with the acquisition of a stem cell–like phenotype.”

Wahl and his team first considered the possibility that p53 does more then function as a “genome guardian” when a collaborative study with Juan-Carlos Izpisúa Belmonte, Ph.D., also a professor in the Gene Expression Laboratory at the Salk Institute, revealed that this tumor suppressor also presents a barrier to somatic cell reprogramming.

To find out whether p53 inactivation does permit the emergence of tumor cells resembling stem cells, Spike and Mizuno combed through hundreds of archival gene expression profiles of breast and lung tumors, searching for stem cell–like signatures and correlating them to their p53 status.

“We found a close correlation between tumors with confirmed p53 mutations or overt p53 inactivation and gene expression patterns typical of stem cells,” Spike explains. “It will influence the way we think about p53 since its loss now seems to have reverberations beyond removing the immediate cell death and proliferation barriers to tumorigenicity.”

Wahl hopes that gaining a better understanding of the process that allows tumor cells to revert to a more stem-like state will reveal new targets for therapeutic intervention. “More stem-like tumors appear to be more aggressive, but they still may have residual capacity to differentiate into less aggressive cell types,” he says. “If we can tap into this potential, we may be able to force these cells to differentiate to become less dangerous, which is an old idea that we need to seriously reconsider.”

The closeness of the collaboration is indicated by the sharing of the first authorship between Spike and Mizuno, who is now at Chugai Pharmaceutical Co. Ltd., in Kamakura, Japan.