The neuroscience of finding your lost keys

Home - Salk News - The neuroscience of finding your lost keys

The neuroscience of finding your lost keys

LA JOLLA, CA—Ever find yourself racking your brain on a Monday morning to remember where you put your car keys?

When you do find those keys, you can thank the hippocampus, a brain region responsible for storing and retrieving memories of different environments-such as that room where your keys were hiding in an unusual spot.

Now, scientists have helped explain how the brain keeps track of the incredibly rich and complex environments people navigate on a daily basis. They discovered how the dentate gyrus, a subregion of the hippocampus, helps keep memories of similar events and environments separate, a finding they reported March 20 in eLife. The findings, which clarify how the brain stores and distinguishes between memories, may also help identify how neurodegenerative diseases, such as Alzheimer’s disease, rob people of these abilities. 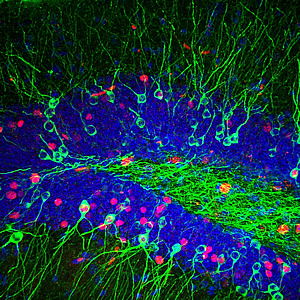 Salk researchers discovered how the brain keeps track of similar but distinct memories. This microscope image shows neural activity in the dentate gyrus, a subsection of the hippocampus where distinct groups of cells were active during the learning episodes (green) and memory retrieval (red).

“Everyday, we have to remember subtle differences between how things are today, versus how they were yesterday – from where we parked our car to where we left our cellphone,” says Fred H. Gage, senior author on the paper and the
Vi and John Adler Chair for Research on Age-Related Neurodegenerative Disease at Salk. “We found how the brain makes these distinctions, by storing separate ‘recordings’ of each environment in the dentate gyrus.”

The process of taking complex memories and converting them into representations that are less easily confused is known as pattern separation. Computational models of brain function suggest that the dentate gyrus helps us perform pattern separation of memories by activating different groups of neurons when an animal is in different environments.

However, previous laboratory studies found that in fact the same populations of neurons in the dentate gyrus are active in different environments, and that the way the cells distinguished new surroundings was by changing the rate at which they sent electrical impulses. This discrepancy between theoretical predictions and laboratory findings has perplexed neuroscientists and obscured our understanding of memory formation and retrieval.

To explore this mystery more deeply, the Salk scientists compared the functioning of the mouse dentate gyrus and another region of the hippocampus, known as CA1, using laboratory techniques for tracking the activity of neurons at multiple time points.

First, the researchers took mice from their original chamber and placed them in a novel chamber to learn about a new environment (episode 1). Meanwhile, they recorded which hippocampal neurons were active as the animals responded to their new surroundings. Subsequently, the mice were either returned to that same novel chamber to measure memory recall or to a slightly modified chamber to measure discrimination (episode 2). The active neurons in episode 2 were also labeled in order to determine if the neurons activated in episode 1 were used in the same way for recall and for discrimination of small differences between environments.

“This finding supported the predictions of theoretical models that different groups of cells are activated during exposure to similar, but distinct, environments,” says Wei Deng, a Salk postdoctoral research and first author on the paper. “This contrasts with the findings of previous laboratory studies, possibly because they looked at different sub-populations of neurons in the dentate gyrus.”

The Salk researchers’ findings suggest that recalling a memory-such as the location of missing keys-does not always involve reactivation of the same neurons that were active during encoding. More importantly, the results indicate that the dentate gyrus performs pattern separation by using distinct populations of cells to represent similar but non-identical memories.

The findings help clarify the mechanisms that underpin memory formation and shed light on systems that are disrupted by injuries and diseases of the nervous system.

Mark Mayford, of Scripps Institute Research Institute, also contributed to the research. The study was supported by the James S. McDonnell Foundation, the Lookout Fund, the Kavli Institute for Brain and Mind, and the National Institutes of Health (Grants: MH-090258, NS-050217, AG-020938).