The mouse with a human liver: a new model for the treatment of liver disease

Home - Salk News - The mouse with a human liver: a new model for the treatment of liver disease

The mouse with a human liver: a new model for the treatment of liver disease

LA JOLLA, CA—How do you study—and try to cure in the laboratory—an infection that only humans can get? A team led by Salk Institute researchers does it by generating a mouse with an almost completely human liver. This “humanized” mouse is susceptible to human liver infections and responds to human drug treatments, providing a new way to test novel therapies for debilitating human liver diseases and other diseases with liver involvement such as malaria.

“We found that, not only can we infect our humanized mouse with Hepatitis B and Hepatitis C, but we can then successfully treat this infection using typical drugs,” explains first author Karl-Dimiter Bissig, M.D. Ph.D, an internist and post-doctoral researcher in the Laboratory of Genetics. “As a physician, I understand the importance of this type of bench-to-bedside research. This study shows a real application for our mouse model, making it relevant from both an academic and a clinical perspective.” 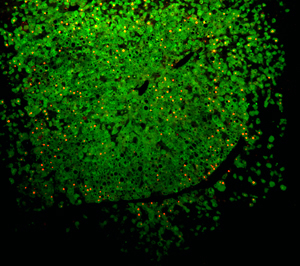 Mice whose own liver cells have been replaced with human hepatocytes (shown in green) can be successfully infected with Hepatitis B virus (shown in red) providing a new way to test novel therapies for debilitating human liver diseases.

The Salk researchers’ findings will be published in the Feb. 22, 2010 online edition of the Journal of Clinical Investigation.

Host-pathogen specificity is both a blessing and a curse-preventing widespread infection but making successful treatments harder to find. For example, Hepatitis B and Hepatitis C can only infect humans and chimpanzees, and although this species barrier prevents us from being susceptible to every infection out there, the flipside is that finding treatments for human infections can be extremely difficult.

This is particularly true when it comes to liver infections. The usual approach is to grow human cells in a dish, to infect and try to treat them there, but this is not possible with liver cells or hepatocytes. “Human hepatocytes are almost impossible to work with as they don’t grow and are hard to maintain in culture,” explains senior author Inder Verma, Ph.D., a professor in the Laboratory of Genetics and holder of the Irwin and Joan Jacobs Chair in Exemplary Life Science.

And since small animals cannot be infected with Hepatitis C, they cannot be used to test drugs that may cure this disease. What’s more, species differences mean that drugs that appear to be effective and non-toxic in animal models sometimes prove to be toxic to humans, and vice versa. Mice whose own hepatocytes have been replaced with human liver cells provide a solution to all these hurdles.

Explains Verma, “This robust model system opens the door to utilize human hepatocytes for purposes that were previously impossible. This chimeric mouse can be used for drug testing and gene therapy purposes, and in the future, may also be used to study liver cancers.”

The Salk team had previously generated a mouse with a partially “humanized” liver, but wanted to improve their method to achieve almost complete transformation. They use a special mouse that has liver problems of its own, but whose problems can be kept in check with a drug called NBTC. Taking away NBTC allows human hepatocytes to take hold and populate the mouse liver with human cells.

The team perfected this system so that nearly 95% of the liver cells are of human origin, but the important question was whether they would behave like a human livers. To test this, the researchers exposed the mice to Hepatitis B and Hepatitis C and found that, unlike normal mice, which are resistant to these viruses, the chimeric animals developed the disease.

More importantly, using pegylated interferon alpha 2a-the standard treatment for Hepatitis C-the researchers showed that the “humanized” liver inside the mouse responds just like a normal human liver. The team also tested additional experimental drugs and found that they too behaved as they did in humans.

“This shows that our chimeric mouse model is medically relevant and can be used to validate novel drugs in a pre-clinical setting,” says Bissig. “This is great news as it provides us with a tool with which we can examine many human hepatotropic pathogens, including malaria. In the future, it also has potential applications for regenerative medicine; allowing confirmation of the true hepatocyte nature of cells prior to human transplantation.”

The methodology of generating these mice is freely available to the research community.

The work was funded in part by the National Institutes of Health, the American Cancer Society, the Leducq Foundation, the Ellison Medical Foundation, the Frances C Berger Foundation, Ipsen Biomeasure and Sanofi-Aventis.

Other than Bissig and Verma, contributors to this work were Phu Tran and Tam T. Le from the Laboratory of Genetics at the Salk Institute, and Stefan F. Wieland, Masanori Isogawa, and Francis V. Chisari from The Scripps Research Institute, San Diego.