La Jolla, CA – Like guards controlling access to a gated community, nuclear pore complexes are communication channels that regulate the passage of proteins and RNA to and from a cells nucleus. Recent studies by researchers at the Salk Institute for Biological Studies offer new insights about the pores’ lifespan and how their longevity affects their function.

Their findings, reported in the Jan. 23 issue of Cell, may provide clues to one of the most enduring questions of biology: how and why cells age. They also offer a new, promising avenue of investigation for scientists pursuing intervention strategies for neurodegenerative diseases.

How aging cells end up with leaky nuclei, how glossy leaves of crop plants may help to counteract global warming, and how the body keeps cholesterol synthesis in check.

“We still have a very poor understanding of the mechanisms behind cell aging. It has been known for some time that the gene expression profile of an aging cell changes and somehow is linked to age-related diseases, but no one really knows why. Our work could provide an explanation for why we observe age-dependent defects in cells,” says Martin Hetzer, Ph.D., an assistant professor in the Salk’s Molecular and Cell Biology Laboratory.

Made up of 30 different proteins, nuclear pore complexes assemble during cell division and penetrate the membrane separating the nucleus from the cytoplasm. Their job is traffic control on the world’s busiest thoroughfare: Each one mediates approximately 1,000 transport events a second. Since nuclear pore complexes are as essential to nondividing cells as they are to dividing ones, the Salk team wanted to determine what happens to them over time. Do they turn over in nondividing cells, or do they remain in place for the life of the cell? 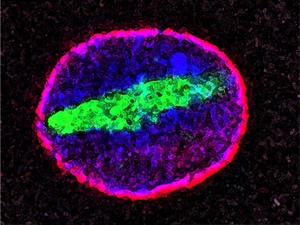 In aging cells one of the proteins composing nuclear pores becomes damaged and molecules that should be restricted to the cytoplasm invade the nucleus (outline shown in red). In particular, a protein called tubulin (shown in green), which is strictly a cytoplasmic protein, shows up as long filaments that co-opt a large part of the nucleus.

Because most of the cells in our body are not actively dividing, the answer would have implications for aging and age-related diseases. “Many of the neurons in the cortex area of the brain are as old as we are; they are nondividing for a very long time,” explains Hetzer.

Approximately half the proteins in the nuclear pore complex make up the central scaffold, or core, while the other, peripheral proteins attach to the scaffold. Using C. elegans, a tiny roundworm that as an adult consists entirely of nondividing cells, Hetzer and his group found that while the peripheral proteins are continually exchanged, the proteins comprising the scaffold remain in place for the life of the cell.

Although the scaffold proteins are detectable, their genes are no longer active. The same held true in nondividing rat neurons. “If proteins are there, but transcripts of the information making the protein are no longer there, they have to be very stable,” says Hetzer, noting that whereas most proteins turn over in minutes or hours, the ones comprising the scaffold in the nuclear pore complex remained intact for the entire lifespan of an organism. “We discovered one of the most stable structures in our cells.”

“It’s a novel concept,” adds first author Maximiliano A. D’Angelo, Ph.D., a research associate in the Hetzer lab. “No one really saw a structure that would last for the entire life of the cell.”

Hetzer and his group then set out to ascertain how these stable proteins hold up over time. Since one of the functions of the nuclear pore complex is to set a permeability barrier between the nucleus and cytoplasm, the researchers developed a reporting system that would scrutinize the barriers to see how efficient they were at excluding inappropriate molecules, much as security auditors keep tabs on airport baggage screeners’ ability to detect and block contraband.

What they found was that in aging cells, one of the proteins composing the scaffold structure becomes damaged, and the permeability barrier deteriorates; molecules that should be restricted to the cytoplasm invade the nucleus.

“Because some cells live for a long time, the accumulation of damage in the long-lived nuclear pore complexes can impair their function and have important consequences for cell homeostasis and survival,” says D’Angelo. “It may also play a significant role in the aging process.”

In particular, a protein called tubulin, which is strictly a cytoplasmic protein, shows up as long filaments that co-opt a large part of the nucleus. For more than 100 years, pathologists had been aware of these filaments, but their origins were unknown. Associated with several neurodegenerative diseases, including Parkinson’s, the filaments are found particularly in the substantia nigra of many Parkinson’s patients, the part of the brain that is involved in dopamine production and that is affected by the condition.

Hetzer’s team hypothesizes that it is the age-dependent defects in the scaffold proteins that undermine the nuclear permeability barrier. “We predict that when the permeability barrier is impaired, molecules are either lost from the nucleus or can leak into the nucleus and thereby change gene expression profiles,” says Hetzer. “This could be a general aging mechanism, and it provides an explanation for the origin of these filaments, which have been known by pathologists for a long time.”

By finding ways to prevent or reverse the leakage, the Salk researchers may be on course to identify novel approaches to treating these perplexing, devastating, and costly conditions.

In addition to Hetzer and D’Angelo, postdoctoral researcher Marcela Raices, Ph.D., and doctoral candidate Siler H. Panowski of Dr. Andrew Dillin’s laboratory at the Salk Institute contributed to this study. The research was carried out with funding from the NIH.