Targeting telomeres, the timekeepers of cells, could improve chemotherapy

In an unexpected finding, the Salk Institute and collaborators show how disabling telomere protection during cell division prompts cell death

Targeting telomeres, the timekeepers of cells, could improve chemotherapy

In an unexpected finding, the Salk Institute and collaborators show how disabling telomere protection during cell division prompts cell death

LA JOLLA–Telomeres, specialized ends of our chromosomes that dictate how long cells can continue to duplicate themselves, have long been studied for their links to the aging process and cancer. Now, a discovery at the Salk Institute shows that telomeres may be more central than previously thought to a self-destruct program in cells that prevents tumors, a function that could potentially be exploited to improve cancer therapies.

When cells replicate in a process called mitosis, their telomeres get a little shorter each time. Eventually, after many cell divisions, telomeres become critically short, signaling the cell to stop dividing. This normal process functions as a barrier against cancer. Cells that have defects in the signaling pathway, however, continue past this stage to self-destruct.

This process of cell destruction, called crisis, typically prevents genetically unstable or damaged cells from replicating. But many types of cancer cells circumvent crisis by protecting the telomeres to hamper the self-destruct signal and allow cells to continue to proliferate.

“We set out to understand the mechanism of cell death in crisis and found a much more active role of telomeres as barriers to tumor development than previously thought,” says Jan Karlseder, Salk professor in the Molecular and Cell Biology Laboratory and senior author of the work. “It started when we saw that mitosis is longer in cells approaching crisis.” The work was detailed in Nature on June 24, 2015. 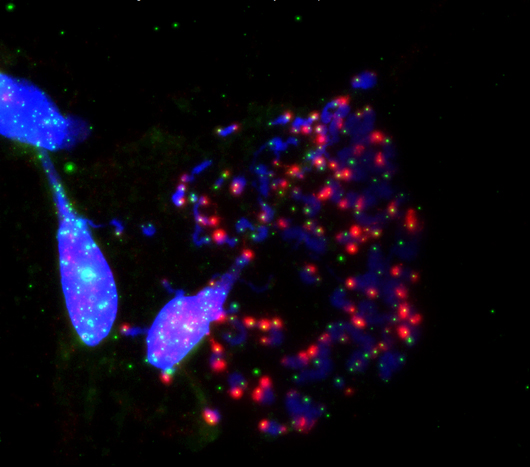 Salk researchers show how the disabled protection of ends of chromosomes (blue) called telomeres (green) during cell division (mitosis) prompts cell death. This happens when the telomere-protecting protein, TRF2, is inhibited. This image shows an exacerbation of telomeric deprotection (red) during mitotic arrest by artificial manipulation of TRF2.

While regular mitosis is typically about 30-45 minutes, cells about to go into crisis have a mitosis that lasts 2-20 hours or more. Observing this reminded the researchers of a 2012 discovery where they artificially lengthened the mitosis process. Typically, telomeres have a protein protecting them from being identified as damaged DNA by the cell and thus prevented them from proceeding to cell death. But during artificially lengthened mitosis, telomeres lost the protein, spurring a DNA damage signal that pushed the cells to self-destruct.

To their surprise, the scientists found that exactly the same thing was happening in the natural crisis state. In this new work, the researchers did real-time imaging of cells in a dish to track the cells’ fate through one or more mitotic cycles. They found that a type of cellular stress called telomere fusion could evoke a prolonged mitosis and eventually crisis. Cells in this state lost their telomere-protecting protein and activated the self-destruct sequence. 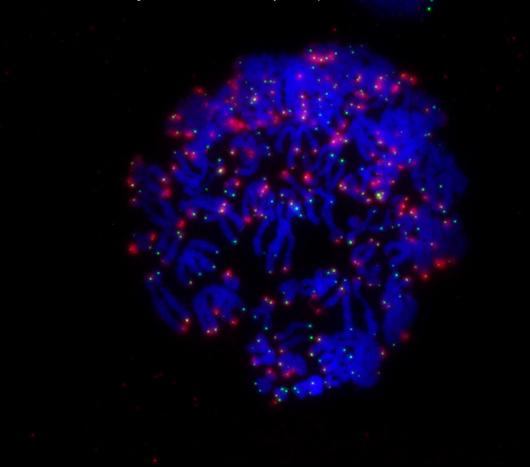 During mitosis, a cell’s chromosomes (blue) rapidly divide. When the ends of chromosomes called telomeres (green) are no longer protected by the protein TRF2, the cell receives a signal (red) to undergo cell death.

“There was a long-standing hypothesis that turned out to be incorrect: that cells simply start to fuse chromosomes and break apart, generating instability and cell death,” says Karlseder, who is also the holder of Salk’s Donald and Darlene Shiley Chair. “What we show instead is it a much more targeted pathway that really only takes one cell cycle to cause crisis–it has nothing to do with the slow and steady accumulation of genomic instability.”

Anthony Cesare, Head of the Genome Integrity Group at Children’s Medical Research Institute in Australia and a contributor to the work, said the finding was very exciting and that it was unexpected to see how events early in the cell cycle, telomere fusions, are passed to a later stage of the cell cycle, mitosis. “This opens up new avenues for understanding how telomeres control cell growth and the implications of telomere biology in chemotherapy,” he says.

Several chemotherapies–such as Taxol for breast cancer–seek to stop cancer by interrupting mitosis so cancer cells can no longer divide. The researchers hypothesize that they can enhance these mitotic inhibitors by, for example, deprotecting telomeres first to make the cells more susceptible to drugs. It might also be possible to see if cells from a particular tumor had shorter or deprotected telomeres and, if so, expect that tumor to be much more sensitive to mitotic inhibitors.

“The pathway we’ve found challenges a long-held hypothesis on cellular behavior during early tumor formation,” says Makoto Hayashi, a researcher at the Hakubi Center for Advanced Research at Kyoto University and first author of the new work. “Comprehensive understanding of the pathway will hopefully provide us a novel method of early tumor diagnosis and a therapeutic opportunity for very early stage of cancer.”

The lab is currently working with Deborah Kado, MD, MS, at the University of California, San Diego to test these theories in patients with newly diagnosed breast cancer.

Authors of the study are Makoto T. Hayashi of Kyoto University, Anthony J. Cesare at the Children’s Medical Research Institute, and Teresa Rivera and Jan Karlseder of the Salk Institute.

This work was funded by the Human Frontier Science Program and the Japan Society for the Promotion of Science Postdoctoral Fellowships for Research Abroad, the National Institutes of Health, the Donald and Darlene Shiley Chair, the Highland Street Foundation, the Fritz B. Burns Foundation, the Emerald Foundation, and the Glenn Center for Research on Aging.

Cell Death During Crisis is Mediated by Mitotic Telomere Deprotection