LA JOLLA–As concerns over deadly antibiotic-resistant strains of ‘superbug’ bacteria grow, scientists at the Salk Institute are offering a possible solution to the problem: ‘superhero’ bacteria that live in the gut and move to other parts of the body to alleviate life-threatening side effects caused by infections.

In a paper published October 30, 2015 in Science, the Salk researchers reported finding a strain of microbiome Escherichia coli bacteria in mice capable of improving the animals’ tolerance to infections of the lungs and intestines by preventing wasting–a common and potentially deadly loss of muscle tissue that occurs in serious infections. If a similarly protective strain is found in humans, it could offer a new avenue for countering muscle wasting, which afflicts patients suffering from sepsis and hospital-acquired infections, many of which are now antibiotic resistant.

Salk scientists found a strain of E. coli bacteria (left) that were able to stop muscle wasting in mice infected with either Salmonella Typhimurium (right) and Burkholderia thailandensis (center).

“Treatments for infection have long focused on eradicating the offending microbe, but what actually kills people aren’t the bacteria themselves–it’s the collateral damage it does to the body,” says Janelle Ayres, a Salk assistant professor in the Nomis Foundation Laboratories for Immunobiology and Microbial Pathogenesis and senior researcher on the study.

“Our findings suggest that preventing the damage–in this case muscle wasting–can stave off the most life-threatening aspects of an infection,” she adds. “And by not trying the kill the pathogen, you’re not encouraging the evolution of the deadly antibiotic-resistant strains that are killing people around the world. We might be able to fight superbugs with ‘superhero’ bugs.”

Once the most powerful and revolutionary of drugs, antibiotics appear to have reached their limits, due to the ability of bacteria to rapidly evolve resistance to the medicines. The rise of antibiotic resistance presents a grave threat to people around the world, as diseases once easily controlled repel all attempts at treatment. A recent study found that up to half of the bacteria that cause infections in US hospitals after a surgery are resistant to standard antibiotics.

In the United States alone, two million people annually become infected with bacteria that are resistant to antibiotics and at least 23,000 people die each year as a direct result of these infections, according to the U.S. Centers for Disease Control. 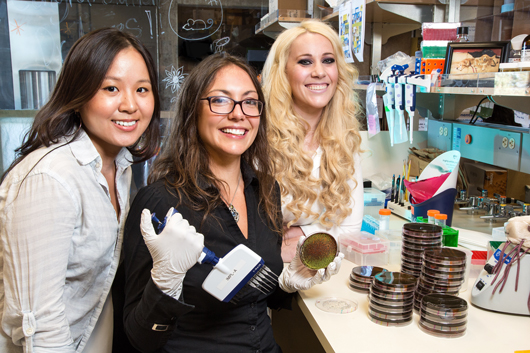 “Antibiotics were a huge step for medicine, but that model of killing bacteria with drugs clearly has its weaknesses,” says Alexandria Palaferri Schiebe, a research associate in Ayres’ lab and co-first author on the new paper. “Most researchers are looking for new antibiotics, but this fuels the arms race between doctors and bacteria. Focusing on disease tolerance–preventing harm done by the disease–instead of microbial eradication is a new paradigm of therapy for infectious diseases.”

In hopes of finding new methods to counter infections, Ayres’ team turned to the microbiome, the community of microbes living–typically harmoniously–within our bodies. In the human body, microbes outnumber cells by 10 to 1 and make up as much as 3 percent of body weight. Despite this, relatively little is know about how these tiny passengers interact with our development, metabolism and immune system.

Ayers began studying disease tolerance as a graduate student, hypothesizing that the gut microbiome might contain bacteria that could protect against damage caused by infections. “There is a lot of evidence to support this idea, but until now no one had identified such a strain or shown the mechanism by which a bacterium would provide disease tolerance,” says Ayres.

The Salk team identified a population of laboratory mice that appeared resistant to muscle wasting. By comparing the makeup of the intestinal microbiome of these mice with mice that lacked resistance, the team identified a strain of E. coli that was present only in the wasting-resistant mice. When normal mice were given an oral treatment of this beneficial E. coli strain, they gained the ability to maintain their muscle and fat mass during intestinal infections of the bacteria Salmonella Typhimurium and pneumonia caused by the bacteria Burkholderia thailandensis.

The next step was to find out how the bacteria were conferring this tolerance to the mice. Collaborating with the laboratory of Salk Professor Ronald Evans, Ayres’ team discovered that during an infection by the pathological bacteria, the E. coli left the gut and moved into the fat tissues to induce protective responses that nourish the muscles.

Normally, mice with lung and intestinal infections see a drop in a hormone known as insulin-like growth factor 1 (IGF-1), a molecule that signals the body to retain muscle mass. But the protective E. coli activated the IGF-1 pathway in the fat tissues, maintaining normal IGF-1 levels and maintaining the animal’s muscle in spite of the pathogenic infections.

The Salk team further found that the E. coli strain was activating the IGF-1 muscle maintenance pathway through an intermediary, a molecular complex in cells known as the inflammasome. Part of the body’s innate immune system, the inflammasome responds to an infection by triggering inflammation in the infected area to destroy the offending microbes. The E. coli used this same alarm system to tell the body to maintain IGF-1 levels and hence muscle mass.

Whether such a microbial ‘superhero’ could come to the rescue of humans with infections remains to be seen. Ayres’ team is currently studying how long the E. coli strain can hold off the pathogens and whether the body’s immune system will eventually eradicate the harmful bacteria completely. They are also beginning to examine whether such a microbe exists in humans.

“There’s a lot we still need to understand, but this is a very promising sign that microbes might be used as medicine,” Ayres says. “It may offer an entirely new avenue for treatment of infections, even those that are antibiotic resistant, while also preventing the rise of new resistant strains.”

Other contributors to the research were Max Chang, Mathias Leblanc, Brett Collins and Michael Downes, all of the Salk Institute.