Now, in a new study published in the journal Cell, scientists at the Salk Institute for Biological Studies have discovered that a synthetic form of vitamin D, calcipotriol (a drug already approved by the FDA for the treatment of psoriasis), deactivates the switch governing the fibrotic response in mouse liver cells, suggesting a potential new therapy for fibrotic diseases in humans. 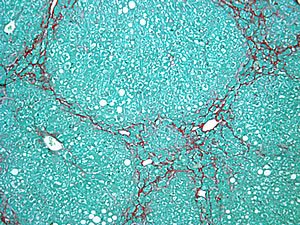 This image shows mouse liver tissue with fibrosis (red), a type of scarring caused by chronic liver diseases and injuries. Salk researchers found that a drug already approved by the FDA for the treatment of psoriasis deactivates the switch governing the fibrotic response in mouse liver cells, suggesting a potential new therapy for fibrotic diseases in humans.

“Because there are currently no effective drugs for liver fibrosis, we believe our findings would open a new door for treatment,” says senior author Ronald M. Evans, a professor in Salk’s Gene Expression Laboratory and lead researcher in the Institute’s new Helmsley Center for Genomic Medicine.

The Salk study focused on a star-shaped “stellate” cell in the liver that serves as a beacon for damage. When called into action, stellate cells produce fibrotic proteins in an attempt to heal an injury. Under chronic stress, however, localized fibrosis expands, eventually leading to cirrhosis, increased risk of liver cancer, and the need for a liver transplant in advanced cases.

The Evans lab discovered a genetic switch through which vitamin D-related ligands such as calcitriol, a hormonally active form of the vitamin, can put the brakes on fibrosis. “Preclinical results suggest the ‘vitamin D brake’ is highly efficacious and led us to believe that the time is right to consider a trial in the context of chronic liver disease,” says Evans, a Howard Hughes Medical Institute Investigator and holder of the March of Dimes Chair in Molecular and Developmental Biology.

Previous studies have shown a physiologic role for vitamin D in liver function, but “it was our discovery of high levels of vitamin D receptor (VDR) in the stellate cell that led us to consider it as a possible off switch for liver fibrosis,” says lead author Ning Ding, a research associate in the Gene Expression Laboratory.

“Current therapeutic approaches, which treat the symptoms of liver disease, don’t stop liver fibrosis from progressing,” says Michael Downes, a senior staff scientist in the Gene Expression Laboratory and co-corresponding author on the paper. “In liver diseases where the underlying cause cannot be cured, progression to cirrhosis is currently inevitable in some people. What we have discovered is that by acting on the genome, VDR can simultaneously defend against multiple fibrotic activators. This is important because many different pro-fibrotic signaling pathways converge on the genome to affect their fibrotic response.”

In addition, the researchers say this new model for treating liver fibrosis may also be helpful in treating other diseases with a fibrotic component, including those of the lung, kidney and pancreas.

The work was supported by grants from the National Institutes of Health, the Howard Hughes Medical Institute, the National Health and Medical Research Council of Australia, the Genentech Foundation, the Leona M. and Harry B. Helmsley Charitable Trust, the Samuel Waxman Cancer Research Foundation, Stand Up to Cancer and Ipsen/Biomeasure.

For information on the commercialization of this technology, please contact Michelle Booden at 858-453-4100 x1612 or mbooden@salk.edu in the Salk Office of Technology Development.